In this little picture Raphael depicts the moment when the Christ Child takes a carnation, traditionally symbolic of divine love and the Passion (Christ’s torture and crucifixion), from his cousin John the Baptist’s hand. The space between the children’s hands is the centre of the careful geometry of the composition, emphasising this important moment of Christ’s acceptance of his future sacrifice for humanity. The Virgin appears lost in melancholy thought. Perhaps she is thinking of the children’s destinies.

The picture is one of several small and medium-sized Madonnas that Raphael produced at the same time as he was painting a suite of rooms in the Vatican palace for the pope, the so-called stanze. It was probably made for a member of the papal court for private devotion, although we do not know who commissioned it. The painting is known as the Garvagh Madonna or Aldobrandini Madonna after its previous owner.

This is one of several small and medium-sized Madonnas made by Raphael in the years immediately following his arrival in Rome, at the same time as he was painting his masterwork – a suite of rooms in the Vatican palace for the pope, the so-called papal stanze. It was probably produced for a member of the papal court for private devotion, although we do not know who commissioned it. The painting is now known as the Garvagh Madonna or the Aldobrandini Madonna after two of its previous owners.

The Virgin Mary sits in a complex twisting pose – sideways on a simple bench or plinth with one leg tucked under the other. She wears a blue, green and gold striped headdress bound up into a turban-like arrangement which was probably fashionable in Rome during Raphael’s time. The infant Christ sits on his mother’s lap, looking down towards the young John the Baptist, who passes him a red carnation – symbolic of divine love and Christ’s future Passion. Their gazes suggest the thoughts that pass between them. The space between the children’s hands is the very centre of the careful geometry of the composition, emphasised by the lines of the architectural backdrop and the Virgin’s features.

Christ’s pose is very natural, although he seems to have an awareness greater than his years. The Virgin appears lost in melancholy thought as she draws John the Baptist’s soft fur pelt closer to him and gathers her mantle to cover the naked Christ. Perhaps she is thinking of the children’s destinies.

Two arched openings either side of the Virgin reveal views reminiscent of the countryside outside Rome. Through the left-hand arch is a church with a bell tower and hills shrouded in blue haze. A larger building, possibly also a church, is visible through the right-hand arch. In the underdrawing, the landscape continues beneath the central architecture, suggesting that Raphael first intended to set the figures before a simple stone parapet but then changed his mind. The vivid colours of the Virgin’s clothes – the bright pink of her dress and two subtly different blues of her shirt and mantle – are echoed in the more soft and faded pastel hues of the misty landscape.

A study for the painting on pink paper in the Musée des Beaux Arts, Lille, shows that Raphael experimented with different positions for the children. There is no sign that the design for the final painting was transferred from a drawing, but there is a very precise geometrical plan in the underdrawing on the panel.

The dark backdrop and mouldings of the architecture very effectively frame the Virgin’s oval face and the delicate bend of her neck. This approach of showing the Virgin in an interior between two arched windows occurs in early works by Leonardo, and it is possible that Raphael had these examples in mind. The complex psychological interaction between the figures also reflects earlier innovations by Leonardo. The figures are perfectly integrated into their setting, creating a sense of order and calm contemplation. Raphael makes divine harmony visible through geometry. 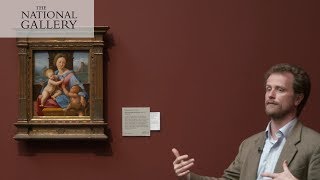 What can we learn from the composition of Raphael's 'Garvagh Madonna', and how did he paint this impressive work? Find out with Matthias Wivel, our Curator of 16th-century Italian Paintings. 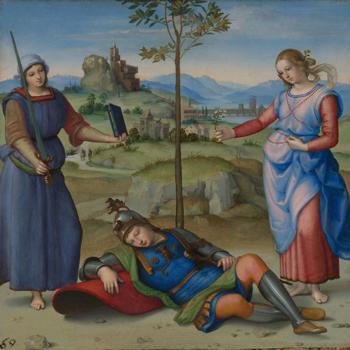 An Allegory ('Vision of a Knight')
Raphael
While resting in the shade of a bay tree, the young soldier Scipio has a vision of Virtue and her adversary Pleasure. Virtue promises Scipio honour, fame and glory through victory in war. Pleasure, with fragrant flowing hair, promises a life of ease and serenity.Raphael interpreted the theme not...
Room 1
Pope Julius II
Raphael
This portrait of the careworn Pope Julius II (1443–1513) is usually dated to the one-and-a-half-year period during which he wore a beard. He grew it in 1510 as a token of mortification while recovering from a serious illness brought on by the loss of Bologna to the French, and vowed not to shave...
Room 5
Saint Catherine of Alexandria
Raphael
Catherine of Alexandria, a fourth-century princess, was converted to Christianity and in a vision underwent a mystic marriage with Christ. When she would not give up her faith, Emperor Maxentius ordered that she be bound to a spiked wheel and tortured to death. However, a thunderbolt destroyed th...
Room 2
Saint John the Baptist Preaching
Raphael
This painting is the only surviving scene from the predella (base) of Raphael’s altarpiece for the Ansidei chapel in S. Fiorenzo, Perugia. The main panel of the altarpiece, ‘The Ansidei Madonna’, is also in the National Gallery’s collection. This predella panel would have been placed beneath the...
Room 2
The Ansidei Madonna
Raphael
This is the main panel of the altarpiece Raphael painted for the Ansidei family chapel in the Servite Church of S. Fiorenzo in Perugia in 1505.The Virgin sits in majesty on a carved wooden throne with the Christ Child on her lap. She draws his attention to a passage in the book on her knee. A str...
Room 2
The Madonna and Child (The Mackintosh Madonna)
Raphael
The infant Christ throws his arms affectionately around his mother’s neck and smiles at us. But the Virgin Mary’s eyes are downcast, as though her thoughts are already on his future sacrifice.The painting probably dates from the early years of Raphael’s time in Rome. It is called the ‘Mackintosh...
Not on display
The Madonna of the Pinks ('La Madonna dei Garofani')
Raphael
In this painting, Raphael transforms the familiar subject of the Virgin and Child into something entirely new. The figures are no longer posed stiffly and formally as in paintings by earlier artists, but display all the tender emotions one might expect between a young mother and her child. The pa...
Room 2
The Mond Crucifixion
Raphael
One of Raphael’s earliest works, this altarpiece was commissioned by the wool merchant and banker Domenico Gavari for his burial chapel dedicated to Saint Jerome in the church of S. Domenico in Città di Castello, Umbria.Christ’s body hangs from the Cross. Two angels balance on delicate slivers of...
Room 1
The Procession to Calvary
Raphael
This is one of three scenes from the predella of Raphael’s Colonna Altarpiece painted for the convent of S. Antonio da Padua in Perugia. The Procession to Calvary was the central scene of the predella, positioned below the main panel of the altarpiece.Christ looks to us as he carries the Cross, h...
Room 1
Portrait of a Young Man
Imitator of Raphael
In the past this painting was believed to be a portrait of Raphael as the sitter slightly resembles his self portrait in The School of Athens of 1509–11 (Vatican). It is not, however, by Raphael and is probably not a portrait of him either. It was previously described as Umbrian and possibly Bolo...
Not on display
The Madonna and Child
After Raphael
This is a copy of Raphael’s Virgin and Child known as ‘The Bridgewater Madonna’. The original is on loan to the Scottish National Gallery in Edinburgh from the Duke of Sutherland’s collection.The copy is similar in size and in most colours and follows Raphael’s style closely, making it difficult...
Not on display
You've viewed 6 of 11 paintings