The Madonna of the Pinks was first published as being by Raphael in Longhena's 1829 book about the artist. It was subsequently thought by scholars to be one of the best of a number of painted copies after it was dismissed by the greatest early authority on Raphael, Johann David Passavant, who saw the picture in Rome in 1835. 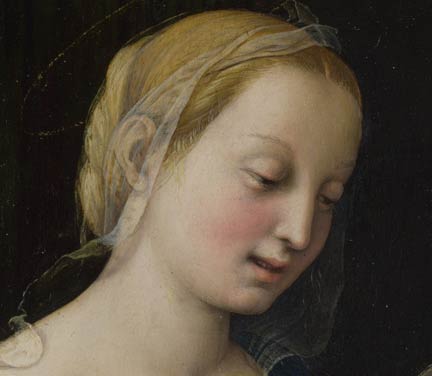 The Camuccini themselves were uncertain about the status of the work, but asserted its authenticity and value at the time the collection was sold to the 4th Duke of Northumberland in 1854. Although installed at Alnwick as a Raphael, the painting's reputation was eroded by the negative opinions of scholars who followed Passavant's opinion over the course of the next century and a half.

As a result, optimistic art historians have at various times claimed that other versions of the picture are the lost original. But none of these attributions was widely accepted until Dr Nicholas Penny examined the Alnwick version and published it as Raphael's original in 1992.