The provenance of a painting is the history of its ownership. It has always been known that Raphael made a painting of The Madonna of the Pinks. There are over 50 painted copies of the original composition and many early prints. The question was whether Raphael's original had survived. 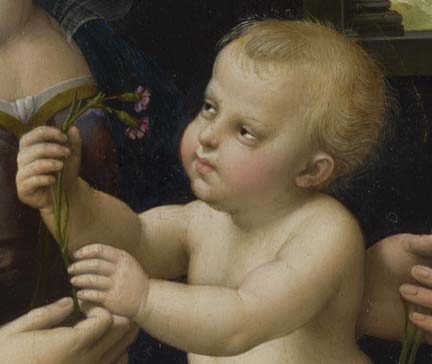 Little is known about this picture's whereabouts before its purchase in Paris in the early 19th century. It was bought by the painter, connoisseur and dealer Vincenzo Camuccini. An inventory of the Camuccini collection, datable to the early 1850s, states that the painting was made for:

Maddalena degli Oddi, a nun in Perugia, from whose heirs a Frenchman acquired it in 1636, taking it to France...

The precise date given for the picture's move to France is confirmed by several French engravings made after it in the second half of the 17th century.

The notion that the picture was painted for a patron in Perugia is perfectly plausible since at the very time 'The Madonna of the Pinks' was most likely to have been painted, Raphael was designing an altarpiece for a church in Perugia (the Borghese 'Entombment').

It was only with 20th-century scientific technology that 'The Madonna of the Pinks' was confidently identified as Raphael's original.