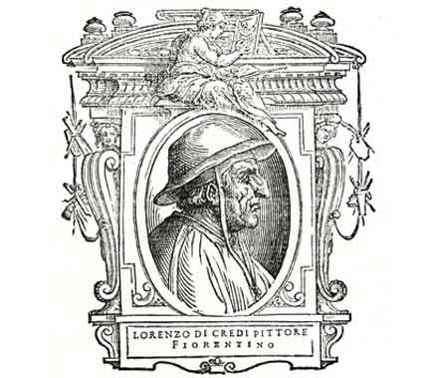 Lorenzo di Credi started his training with Verrocchio – probably in the early 1470s. He was certainly working there as a painter in 1480, and stayed there until Verrocchio’s death in 1488. Lorenzo was strongly influenced by the young Leonardo da Vinci, who also trained with Verrocchio. His style appears to have developed little.

The Virgin adoring the Child
Lorenzo di Credi
The Virgin Mary kneels on a grassy patch in the foreground, seemingly undisturbed by our intrusive gaze. Her hands are clasped in prayer as she faces her infant son, who is lying before her. His legs crossed, his right elbow resting on a pillow, he is focusing on something outside the picture.A r...
Gallery A: Paintings 1250-1600
The Virgin and Child
Lorenzo di Credi
The Virgin Mary is seated directly in front of us. Together with swathes of drapery, she covers almost the entire picture plane, forming a triangular shape that is set off against the dark background. Light radiating from the front brings out the vibrant colours of her garments. These colours are...
Room 59
The Virgin and Child with Two Angels
Andrea del Verrocchio and assistant ( Lorenzo di Credi )
Verrocchio had a large and active studio in Florence, and trained many artists who would become leading figures in the Florentine Renaissance, including Botticelli and Leonardo da Vinci. He usually collaborated closely with his students, giving them the opportunity to work on important parts of a...
Room 59