Margaret van Eyck was painted on a panel consisting of a single board of oak, about 8mm thick. It has a regular vertical grain. This indicates that it is quarter sawn (cut radially from the tree trunk like a slice of cake), as is usually the case with Netherlandish oak panels. Since the frame prevents access to the end grain, dendrochronology is not possible. 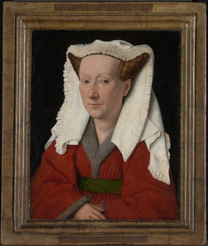 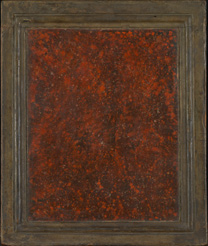 The four sections of the frame, carved with the same profile on both front and back, have been assembled around the panel using simple mortise and tenon joins. The tenons in the side pieces have been slotted into the mortises in the upper and lower mouldings.1 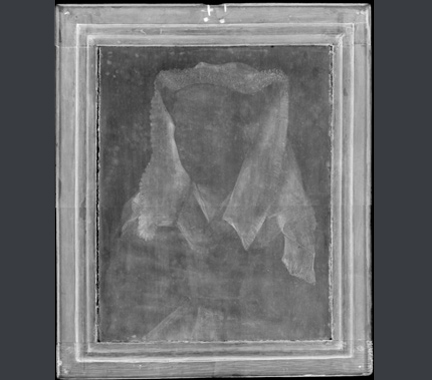 The joins have been pegged with short wooden dowels. They are visible in the X-radiograph and at the upper corners of the frame where movement in the wood has caused them to push through, cracking the decorated surface.

The remains of small metal pins are visible in the X-radiograph at each corner. They appear to have been hammered through from the back and are likely to have been part of a later repair and reinforcement of the frame. Two more metal pins and the circular nail heads at the centre of the upper edge are the remains of some sort of hanging device, probably not original. 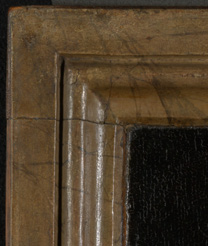 'Margaret, the Artist's Wife', detail of the upper right corner showing the painted join in the marble 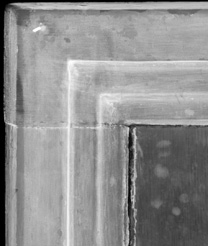 Jan van Eyck, 'Margaret, the Artist's Wife', detail from the X-radiograph of the upper right corner

The panel surfaces and frame mouldings were both coated with a chalk and glue ground in preparation for painting. Originally they would have appeared as continuous. As the oak board ages and dries out, it contracts slightly, causing the ground to crack at the junction between the panel and the frame moulding. The gap at the left edge is now wide enough for the wood of the oak panel to be visible.

Cracks have also developed in the frame joints but Van Eyck cleverly anticipated this by painting joins in the imaginary marble to echo the wooden construction. In the upper left corner the painted join and the crack from the real join coincide exactly.