Maximising the appropriate use of natural light

The amount of natural light entering the majority of the galleries is controlled by externally mounted blinds. These blinds are opened and closed by a computerised Building Management System (BMS) in response to the light levels measured in the galleries. The system has been designed to ensure that no direct sunlight is admitted and that the total light levels are limited to a maximum of 200 lux.

In most galleries this has been achieved by setting a seasonal maximum opening angle for each blind, but this approach is not able to compensate for the movement of the sun during the day. As a consequence, blinds were often not opened as far as they could have been, which unnecessarily restricted the amount of natural light allowed into the galleries and therefore increased the need for additional artificial light.

A new blind control program has been instigated to overcome this limitation by using the time and date to more accurately calculate the changing position of the sun. From this the system repeatedly computes maximum and minimum safe opening limits for each set of blinds, taking into account their orientation and the slope of the glazing. 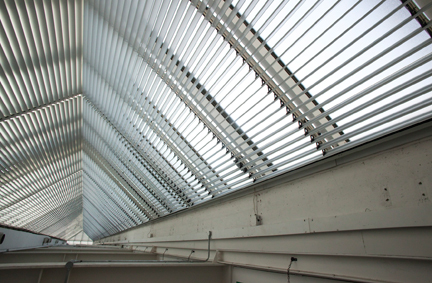 The limits for each set are updated sequentially every two to three minutes. Calculations are made to an accuracy of less than 1°, although blind movements are made in increments of 2.5 or 5°. The BMS also incorporates an external light sensor that shows whether conditions are sunny or overcast. When it is overcast, the output from the max/min angle algorithm is overridden and, if required, the blinds can move to their fully open position.

This also occurs if the program determines that the roof light will be in shadow from an adjacent building or another part of the roof structure. Since the blinds need to be closed during hours of darkness, the program also calculates sunset and sunrise times. Light levels in each gallery are measured by several sensors; the gallery control mechanism works from an average of the readings taken during the previous minute. The system also reacts to high or low instantaneous values, by turning the artificial lighting in the room on and off.

This new blind control 'strategy' 27 was devised by building services consultant Andrew Reid & Partners 28 who have worked with the National Gallery for many years. The program, which was developed using an architectural software package that includes solar simulation, was initially tested in seven galleries, but will be extended to include the rest of the galleries for which this type of light control is suitable.

27. The new control strategy has been installed into an IQ3xcite XNC controller, which has sufficient software capacity to carry out the extensive trigonometric calculations. This communicates with the Gallery’s existing controllers via the BMS network.