The building designed by William Wilkins to house the National Gallery was opened by Queen Victoria on the 7 April 1838. At this time the atmosphere of central London was heavily polluted 1 and in 1850 and 1853, the House of Commons appointed committees to examine the effects of this pollution on the Gallery's collection. The opinion of the eminent scientist Michael Faraday was sought and although he was not available to do the work himself he noted that, ‘he had "no doubt that a person of competent chemical knowledge and a little acquainted with paintings in ancient and modern times might be valuably employed in ascertaining such points"’. Regrettably Faraday's advice went unheeded for 80 years 2.

The original Wilkin's building, facing Trafalgar Square, was expanded in a series of building campaigns throughout the 19th and 20th centuries as neighbouring land became available. This culminated in the opening of the Sainsbury Wing in 1991. Today, almost 70 individual rooms, in a wide variety of architectural styles, are used to display the majority of the Gallery's collection.

Natural light has always been used to illuminate the collection, although to varying degrees through the Gallery's history. Before the introduction of artificial lights the Gallery often had to be closed on dark days as there was insufficient natural light for visitors to see the paintings properly. In 1914 the decision to install electricity was taken and by 1935 the whole Gallery was equipped with the new lighting 3. The recognition that the collection would benefit from a conditioned environment, above and beyond the problem of pollution, was understood at this time 4, but initial requests for air conditioning were turned down as it was still considered to be an expensive luxury. 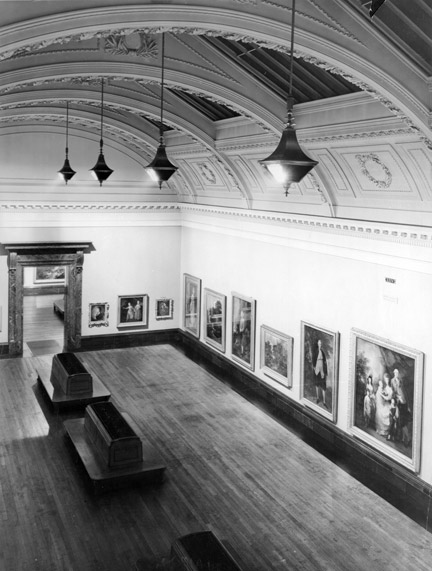 In 1934 Faraday's suggestion was finally realised with the appointment of the first Scientific Adviser to the Trustees of the National Gallery, F.I.G. Rawlins 5. Initially the adviser’s mandate was to counsel the Trustees on issues relating to the conservation of the collection. However this soon developed to also include X-radiography, colour measurements, the analytical analysis of materials and to the further consideration of the effects of changes in environmental conditions. The possibility of air conditioning the National Gallery continued to be discussed 6 and examined over the following years, but these discussions came to a halt with the outbreak of the Second World War. 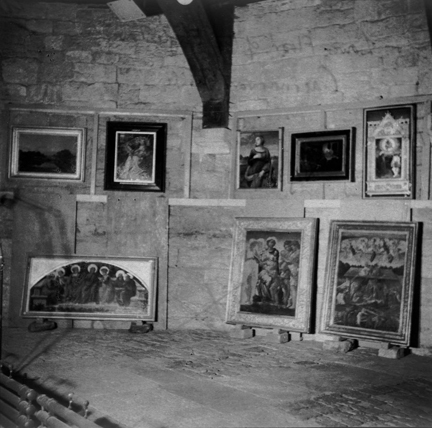 Paintings stored on the lower floor of the Eagle Tower, Caernarvon Castle during the Second World War, prior to transfer to Manod Quarry in 1941

During the war the collection was moved out of London to protect it from the bombing. The paintings were stored in disused Welsh slate mines in Manod. With simple heating the environmental conditions within the mines proved to be very stable 7, providing consistent, stable storage conditions for five years.

As a result of the controlled environment there was a significant drop in the number of required remedial conservation treatments 8. This clearly demonstrated the practical benefits of a more controlled environment within the National Gallery itself. The data gathered, relating to relative humidity and steady-state conditions, combined with a need to clean and filter the air within the gallery rooms proved sufficient to convince the Trustees of the value of environmental control for the collection and air conditioning was gradually introduced from 1950 9. The work began in Room 12 10, followed by Rooms 1 and 2 then 4, 5 and 11 from 1954 to 1956. 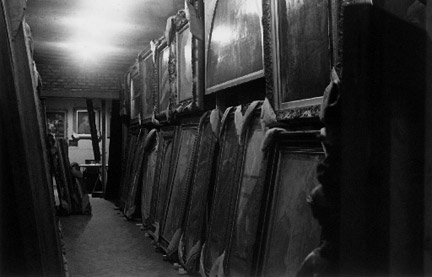 Glazing had been the accepted practice during the 19th century to protect the pictures from the dirt and pollution of London air 11; the introduction of air conditioning made it possible to remove the old glass which had partially diminished the visitors’ ability to see the paintings for over a century.

The expansion of the air conditioning programme continued throughout the 20th century, with many improvements continuing to be introduced well into the 1990s 12, following the completion of the Sainsbury Wing in 1991. During this period the lighting in many of the main floor galleries was also gradually upgraded to follow the new system that had been developed for the Sainsbury Wing 13.

From the 1990s onwards building projects have involved room refurbishments, including maximising the appropriate use of natural light within the gallery spaces and improving energy efficiency through established engineering solutions. Where possible, when new engineering systems have been commissioned, their long-term life cycle has also been considered, to minimise running and maintenance costs.

Over the centuries the National Gallery has become one of the most important collections of Old Master paintings in the world. Preserving this collection in an appropriate environment while ensuring access for the public and future generations has been a challenge, particularly when energy costs are rising and the demand to reduce our carbon footprint is high. The Gallery is committed to preserving the collection as its highest priority while also accepting the importance of reducing our energy consumption.

3. K. M. Clark, ‘National Gallery and Tate Gallery Directors' Reports’, National Gallery 1935, pp. 5: "To mark the completion of the electric light installation by H.M. Office of Works, a soirée was held on March 6th, to which members of the National Gallery Art Collections Fund were invited. Regular public opening of the Gallery on three days a week until 8 p.m. was started on April 1st; it has been attended with great success. A poster advertising the Evening Opening of the Gallery was issued, and about 50,000 people have availed themselves of the facility in nine months.".

4. K. M. Clark, ‘National Gallery and Tate Gallery Directors' Reports’, National Gallery 1936, pp.11 : "A number of questions dealing with moisture content of woods, expansion and contraction of panels, wall temperatures, thermal equilibrium between pictures and their surroundings have been referred to the Forest Products Research Laboratory, the Build Research Station and other Government Departments.".

8. General reference: J. Weaver, G. Stout and P. Coremans, 'The Weaver Report on the Cleaning of Pictures in the National Gallery' in ‘Museum’, vol. III, No. 2, (1950) pp. 112–176. Although not directly related to the mines a specific example of the benefits of improved environmental conditions is discussed in, B. New, H. Howard, R. Billinge, H. Tomlinson, D. Peggie, D. Gordon, 'Niccolò di Pietro Gerini’s 'Baptism Altarpiece': Technique, Conservation and Original Design'. National Gallery Technical Bulletin Vol 33, pp 27–49, footnote 36. http://www.nationalgallery.org.uk/technical-bulletin/new_howard_billinge_tomlinson_peggie_gordon2012 [accessed on 19 February 2013].
9.T. Keeley and I. Rawlins, 'Air Conditioning at the National Gallery, London, Its Influences upon the Preservation and Presentation of Pictures' in ‘Museum’, vol. IV, No. 3, (1951).

12. This work included: the introduction of air conditioning to Rooms 33, 34, Rooms 41 through to 46, Rooms 6, 7. 8 and 9 and Room 29, along with major air conditioning plant upgrades serving the West Wing galleries; replacement of wet system open central cooling plant with centralised air cooled chillers on a purpose constructed gantry over Orange Street loading bay; mechanical ventilation with tempered air was introduced to Rooms 32, 35 to 39, Rooms 30 and 31 from 1991 onwards; and the North extension underwent major refurbishment including air conditioning upgrade from 1998.