Installation of LED based lighting in the picture galleries

Selecting a particular LED unit required a number of issues to be considered: the safety of the paintings; the quality of the light; energy efficiency; the reliability of the units themselves; and guarantees of continuing supply, maintenance and support. After testing several units, in the Gallery's Scientific Department and considering the results of assessments carried out by the National Portrait Gallery, the ERCO Optec LED spotlight, controlled with a new Dali system 29, mounted on standard EU three-phase track, was selected for experimentation in the picture galleries of the National Gallery. These were installed first in the Sainsbury Wing (Room 62), and then in the main Wilkins Building in the newly renovated Rooms 6, 7 and 8 30.

Through these trials it has been shown that, in general, each 90 watt tungsten spotlight can be replaced, one for one, with a 14 watt LED spotlight; this results in a considerable energy saving. 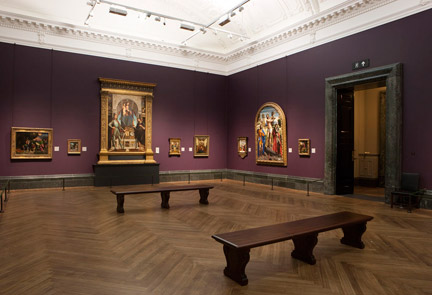 While the energy saving advantages of LEDs is clear, the test produced an unexpected agreement between the Director, curators, and conservators regarding the aesthetic qualities of the light, which was judged to be greatly superior to the existing tungsten lighting system.

Improvements were noticed in three principal aspects, each of which relates to the interaction of the LED units with natural light:

The trial also gave us an opportunity to review the lighting control strategy. The first stage is that natural light enters the space via skylights; this is controlled by the motorised blinds described on the previous page. A dimming control strategy was developed that uses the LEDs to supplement light levels when there is a lack of natural light to maintain a chosen lux level on the wall.

A signal (ranging from 0 to 10V), provided by the BMS, permits the light level of the LEDs to be altered in 10% steps. The Dali interface controller allows these adjustments to take place through the existing lighting track connected to the BMS. This control provides a smooth, almost undetectable, transition to maintain the light required for the paintings on display. In addition to the dimmer control, each light fitting can be adjusted on this system and set independently to a level between 0% and 100% so that differing amounts of light can be set initially for each wall in an exhibition, or, indeed, for individual paintings as required. 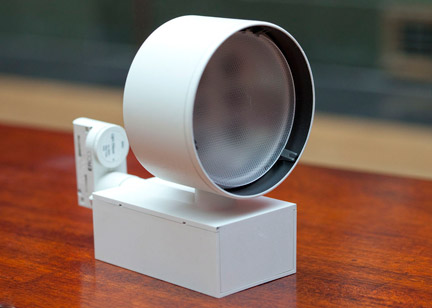 With the new LED system, adjustments in level during the course of the day are virtually indistinguishable from natural variations, and visitors would have to look up to see if a cloud had passed by or the lights had turned on. Inbuilt delays prevent overreaction to fast moving clouds, because we do not wish to even-out the variability and 'liveliness' of natural light.

Another positive outcome revealed by testing was the possibility of generally lower artificial light levels for the paintings. The previous light limit for artificial lights of 150 lux has been reduced to 130 lux as the LED lamps appeared to be too bright, aesthetically, at 150 lux 32.

As a result of the trials it was agreed between Gallery stakeholders to install this system throughout the galleries both in the Sainsbury Wing and Wilkins buildings. The work commenced in July 2011 in the Sainsbury Wing and is due for completion in March 2013. The lamp life of LEDs is significantly longer than many other sources and are reported by the manufacturer to be around 50,000 hours, giving some 25 times greater life expectancy. Once this project is complete, calculations indicate it will produce substantial annual savings.

32. Further work would be required to investigate and explain this process. However, it is likely to be related to the presence of an increased proportion of bluer wavelengths in the LED light.