The dog in the lower-right corner (fig.54) is accurately copied from Dürer’s engraving of ‘Saint Eustace’ (fig.49). Only the tail has been altered, to keep it within the panel. Gossart’s dog, however, has an almost quivering alertness that is not taken from Dürer. Gossart’s unsurpassed command of the oil technique, and his attendant mastery of light, allowed him to make the dog’s eye appear to sparkle and its nose and whiskers seem to twitch. Even when Gossart is copying literally, he transforms the models that he imitates. 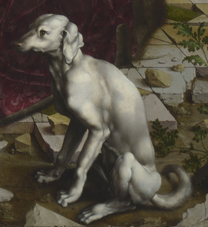 fig.54 Detail from NG2790, the dog in the lower-right corner
View enlargement in Image Viewer 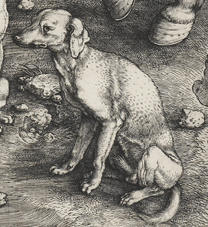 Gossart divides his painting into two horizontal registers: the celestial zone of the star, the dove and the angels; and the terrestrial zone of the Virgin and Child, the kings and their attendants, and the shepherds. Admittedly, one angel is present in the terrestrial region, hidden in the doorway above the ox. The reasons for his presence there are obscure. Otherwise, the celestial and terrestrial beings stay within the boundaries of their two registers. They never overlap but meet where the top of Balthasar’s hat touches the lower contour of the angel on our left. In the terrestrial zone, the poor – the Virgin and Child and Saint Joseph, the shepherds and the ox – are isolated from the rich kings and their attendants. The Virgin’s mantle, however, interlocks with Caspar’s; and his sceptre and the lid of his chalice intrude slightly across her draperies, while the contour of his head intersects three of the shepherds.

The celestial and terrestrial zones are united by the strong verticals of the architecture, stressed by rather sudden contrasts of light and shade. No structural sense can be made of the buildings, which have been created as a decorative foil as well as a narrative context for the figures. The verticals are frequently aligned with verticals in the figures of the lower zone: Balthasar’s gift and the ends of his fringed scarf line up with a section of wall behind; the folds of Joseph’s skirts and his stick echo and continue verticals of the architecture; as does the strongly-lit fold hanging from the Virgin’s right knee. Melchior’s gift and the stripes and contours of his clothes again accord with some of the verticals in the buildings behind him. There are also echoes or visual rhymes between celestial and terrestrial figures: Caspar’s pose is not unlike that of the angel in pink in the top-right corner; while his and the angel’s shapes are echoed in the dog in the lower-right corner. The solemn Child has counterparts in the boisterous dancing children on the frieze far above his head (fig.25) and in the playing, perhaps even fighting, children whose legs can just be seen on the two capitals at the upper edge (figs.26, 27). 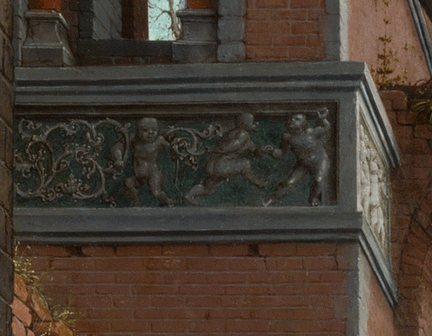 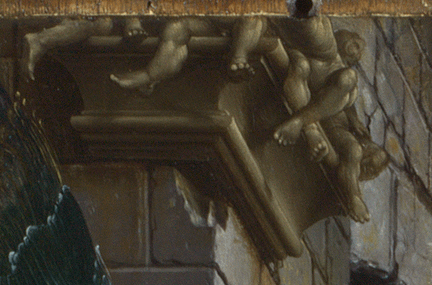 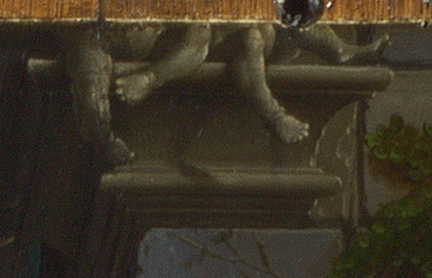 In the Monforte altarpiece, van der Goes placed his principal figures in a relatively shallow frieze against a rapidly-receding landscape. Gossart groups his figures in a very much deeper space and their positions can be plotted in relation to the squares of the floor. The foremost figure is Balthasar, whose feet are on the fifth and sixth tiles from the lower edge. Joseph’s foot is on the twenty-third tile; the Virgin’s foot is on the ninth; Caspar is in the same area; while Melchior’s feet are on the twelfth and thirteenth rows of tiles. The strong diagonal recession between the figures of Balthasar and Melchior is emphasised by the facts that the pose of one reflects and reverses the pose of the other; and that the colours of their vestments are in some sort of counterpoint. Another receding diagonal leads from the dog in the lower-right corner to Caspar, the Virgin and Joseph. In the celestial zone, the angels on the right fly on diagonal courses from the top-right corner towards the Virgin and Child.

The composition is closed on the left and at the lower edge, while the top and right edges interrupt angels’s wings and the figures of attendants. There is a greater sense of movement here, though the predominant impression is of a stately and slow progress towards the Virgin and Child. The ceremonious motion takes its rhythm from the long vertical lines in the figures and the architecture. The Virgin’s shoulders, hair and veil make protective arches over the Child; and these arches are echoed many times in the buildings behind her. The soaring verticals, moreover, give a sense of exaltation.

The mathematical centre of the composition is in the Virgin’s face, near the line of her jaw; the vanishing points of the perspectival systems are to the right of the Virgin’s head, near the shepherd who stands directly behind the ass. His hat was at first a brilliant red; Gossart covered the red with a dull green-brown, presumably to make the hat, the figure and the vanishing area less obtrusive. It may not be accidental that Gossart has placed a shepherd at this focal point; and it cannot be coincidental that he wrote his signatures on the two Africans, Balthasar and his black attendant. Whatever his reasons were, they are now elusive. The acne on the face of Balthasar’s principal attendant and the hairy wart on Caspar’s face may be reminders that imperfections can afflict even the most prosperous. The ease with which Balthasar, the Virgin and Melchior hold the undoubtedly exceedingly heavy gifts may merely indicate that these people are not ordinary mortals. The kings’s clothes, furs and jewellery and Balthasar’s boots, of the thinnest and softest leather, are all marks of unimaginable riches; but the intense blues and scarlets of the Virgin’s and Joseph’s clothes allow them to maintain their dignity and presence among all the splendour of cloths of gold, velvets, jewels, pearls and ermine. The Child, of course, is naked: the Word made flesh.

Gossart has asserted the divisions between celestial and terrestrial, between rich and poor, but has also with consummate skill integrated them in a ceremonious representation of the Incarnation. Developing upon Hugo’s Monforte altarpiece, Gossart has used successions of long verticals to imply solemn, stately movements. His skill in manipulating space, more ambitious than Hugo’s, allows him to deploy and order his composition along receding diagonals and to distribute his figures with extraordinary intelligence. A surface pattern radiates from a vanishing area slightly above and right of centre and imposes a wheel-like discipline, in which the grid of the floor, because it is broken and overgrown and because its colours are not violently contrasted, cannot command too much attention. The same circle that describes the wheel and its spokes also encloses a sphere, the radii of which mark some of the main stresses of the composition in depth: the flights of angels; the processions of Balthasar, Melchior and their attendants. Gossart uses geometrical pattern in both two and three dimensions with immense discretion to enhance the narrative and to induce apposite emotional responses.