To coincide with the Jan Gossaert's Renaissance exhibition (2011), the full catalogue entry of Gossaert's The Adoration of the Kings, taken from 'The Sixteenth Century Netherlandish Paintings with French Paintings before 1600' by Lorne Campbell, was published on the Gallery website in advance of book publication. Find out more about the catalogues.

Lorne Campbell was George Beaumont Senior Research Curator at the National Gallery. He is the author of numerous publications including ‘The Fifteenth Century Netherlandish Paintings’ in the new series of National Gallery Catalogues. 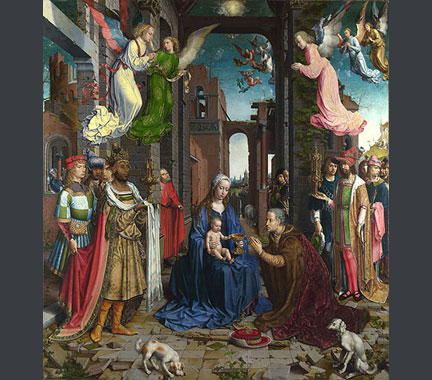 Jean Gossart, 'The Adoration of the Kings', NG2790
View enlargement in Image Viewer

Jean Gossart, 'The Adoration of the Kings' – Lorne Campbell
[PDF 488kb – opens in a new window]

Lorne Campbell, ‘Jean Gossart, The Adoration of the Kings’ published online 2011, from 'The Sixteenth Century Netherlandish Paintings with French Paintings before 1600', London. http://www.nationalgallery.org.uk/paintings/research/jan-gossaert-the-adoration-of-the-kings-introduction