NG2790 is signed by Gossart in two places. In the seventeenth and eighteenth centuries, those who did not notice the signatures associated the picture with Dürer. In 1682 Claude du Molinet thought that it was 'in the style of Dürer'; in the inventory of the collection of Charles of Lorraine, taken after his death in 1780, it was attributed to Dürer.52 Subsequent authorities have noticed Gossart's signatures and all except Ainsworth (see below) have concluded that the painting is by Gossart. Those who have examined it closely have agreed that it is very consistent in style and technique and have been unable to discern any significant interventions by assistants.

The theory of a ‘prestige collaboration’ between Gossart and Gerard David

In 2010, Ainsworth suggested that the London 'Adoration' was the product of a 'prestige collaboration' between David and Gossart. She argued that the Virgin and Child, though underdrawn and perhaps laid in by Gossart, were in fact by Gerard David.53 She felt that the 'oval-faced Virgin with typically downcast eyes and prominent dimpled chin; the widely spaced placement of her legs, like two columns, supporting the erect Christ Child on her lap; the neatly arranged, cascading draperies, spilling out onto the floor in tightly composed, angular folds – these are all characteristic of David's paintings of the Virgin and Child.'54 The same description could be applied to the Virgin of the Monforte altarpiece by Hugo van der Goes – though there the Child is not sitting up 'erect' – as well as to other compositions by Gossart's predecessors; and Gossart based the composition of NG2790 on the Monforte altarpiece (fig.37). Ainsworth, however, implied that Gossart was taking ideas from David's 'Adoration of the Kings', also in the National Gallery (NG1079, fig.38); whereas the present writer believes that David's 'Adoration', very different in composition from other paintings of the same subject that are assigned to David (fig.39), is in fact a response by David to the novelty of Gossart's reinterpretation of Hugo's creation.55 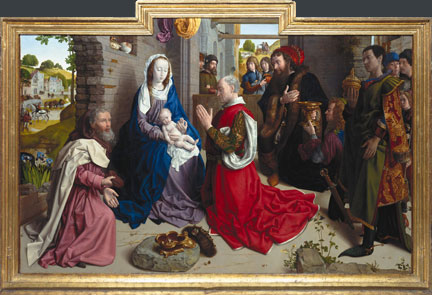 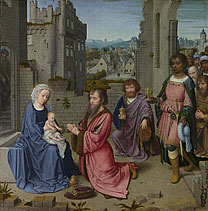 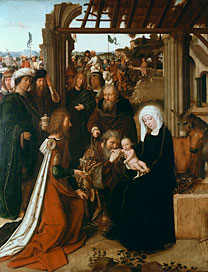 fig.39 Gerard David, 'The Adoration of the Kings' © akg-images

Ainsworth observed that 'the Virgin and Child types in Gossart's “Adoration” are distinctly different from those in the Prague “Saint Luke Drawing the Virgin” of about 1515'.56 The Prague picture is signed, on Saint Luke's belt, GOSSAR…. It is true that the types are different; but it is less evident that the heads differ 'stylistically as well as in terms of painting technique'.57 In fact, reproductions of details from the two pictures show very remarkable similarities in style and technique (figs.40, 41).58 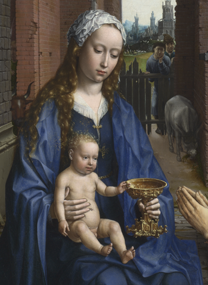 fig.41 Detail from NG2790, the Virgin and Child
View enlargement in Image Viewer 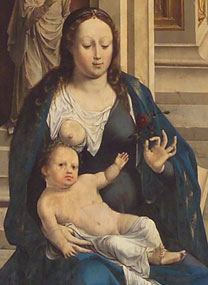 In the Prague picture, Gossart is aiming at historical accuracy by portraying the Virgin as a beauty of Roman antiquity: which is in keeping with the palace in which she sits, built in a classical style and decorated with sculpture representing antique as well as biblical subjects. The Virgin is in type a sister of Gossart's Amphitrite in his 'Neptune and Amphitrite' of 1516, his Deianira in his 'Hercules and Deianira' of 1517, his Venus in his 'Venus and Cupid' of 1521, his undated 'Venus' (Rovigo) and his 'Danaë' of 1527.59 The Virgin in the London 'Adoration', on the other hand, is Gossart's variation on the ideally-beautiful Virgin of van der Goes's Monforte altarpiece; and Gossart continues to develop this ideal of beauty in his half-length compositions of the 'Virgin and Child' such as those in a private collection (at present on loan to the National Gallery; L650), in Berlin, in the Prado and in Cleveland.60 Gossart of course selects appropriate figure types, just as he chooses different architectural settings. In the London and Prague paintings, he is making very deliberate decisions to envisage the Virgin in very distinctive ways. The resemblances in treatment, however, are many and striking. The hair and mouths correspond closely, as do the high upper eyelids and the slender lower eyelids, emphasised by narrow dark shadows below lit areas representing the linings as well as the surfaces of the lower lids. The noses are broad and long, though they terminate in neat points, and are stressed by wide highlights. There are bright lights on the ends of the noses, on the channels in the upper lips and at the far sides of the lower lips, where deep shadows accent the far corners of the mouths. The reflected lights on the chins and the incipient and slight double chins are very similar indeed. 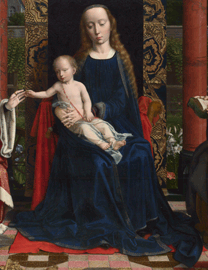 fig.42 Detail from Gerard David, 'The Virgin and Child with Saints and a Donor', NG1432 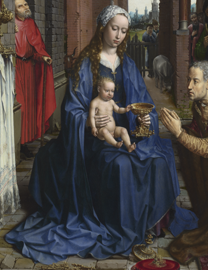 fig.43 Detail from NG2790, the Virgin and Child
View enlargement in Image Viewer

Ainsworth thought the Prague Virgin and Child types 'rather homely' and contrasted 'David's hallmark sweet Virgin and Child models'.61 The Virgin in NG2790, she observed, 'shows … David's characteristic smooth modeling of the face and refined drawing of the features in paint'.62 Indeed, if we compare the Virgin's face in NG2790 with the Virgin's head in 'The Virgin and Child with Saints and a Donor' (NG1432), attributed to David (fig.42),63 we find similarities in the painting of the eyes, nose, mouth and chin, but David's tonal contrasts are more sudden, less controlled and less delicate; the reflected lights and the highlights on the hair and the eyelids are less sensitively modulated. Ainsworth perceived in the male heads of the NG2790 'somewhat rougher brushwork and more densely applied paint'. But the heads of the three kings (fig.21), those of their attendants, even those of the foremost shepherds are just as beautifully painted as the Virgin's head, with passages of virtuoso detail that match the extraordinary precision and subtlety in the rendering of the textiles and metalwork (figs.44, 23). Even the dogs, though copied from German prints, and the ass (fig.34) are extraordinarily sympathetic studies of animals. There is nothing in Gerard David to equal Gossart's sensitivity to detail and the accomplished economy of his technique, which allowed him to record all his observations with astonishing skill. 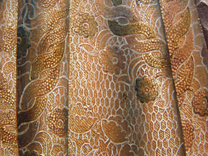 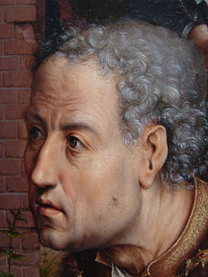 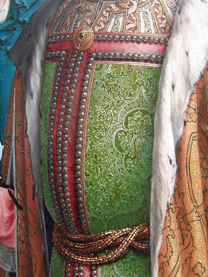 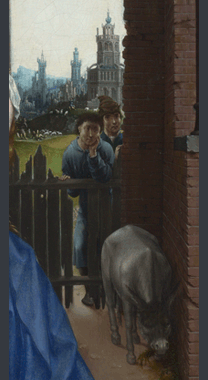 Although Ainsworth admired Gossart's 'very sophisticated understanding of light' in his early paintings, she saw as typical of his technique during his early period a 'rather thick application of paint in discrete, unblended brushstrokes' and a 'less than subtle modeling of forms'.64 'Not yet adept at depicting the human body', Gossart is 'somewhat maladroit' in 'anatomical description, for example in the awkward foreshortening of arms'.65 She found confirmation of her attribution to David of the Virgin's head in the London 'Adoration' in her observations that his brushwork ended 'abruptly at the altered neckline of the dress, even though the light underpainting is visible beyond it. There is also a gap between the reserve left for the head and the painted layers at the right contours. This suggests that someone else executed the head of the Virgin and did not bother to blend it fully into the existing form.'66 In fact, Ainsworth may have misinterpreted the complex changes in this area, where Gossart was altering the necklines of the Virgin's chemise and dress (fig.45). 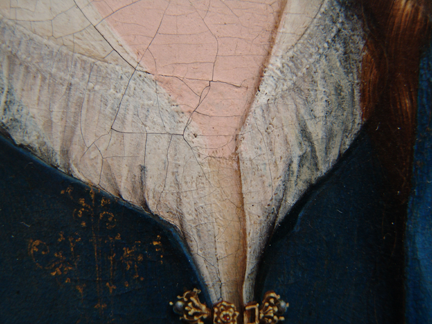 fig.45 Detail from NG2790, the necklines of the Virgin's chemise and dress
View enlargement in Image Viewer 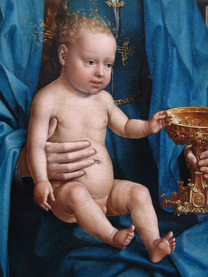 In the Child's head (fig.46), Ainsworth discovered 'David's more opaque treatment of flesh tones (rather than the slightly eerie opalescence of Gossart's), as well as David's emphasis of the Child's almond-shaped eyes with a continuous stroke of white paint on the lower lid.'67 Though Ainsworth did not define further Gossart's 'slightly eerie opalescence' she may have been thinking of the faces underpainted in grey in later pictures in the style of Gossart, such as the Mauritshuis 'Virgin and Child' and the Antwerp 'Portrait of a Man'.68 Alternatively, she could have been referring to Gossart's own 'Children of Christian II of Denmark', probably painted in 1526, where the red lakes in the flesh have faded and where some (charcoal?) black is mixed into even the palest areas of the faces. Neither grey underpainting nor such admixtures of black can be found in any of the heads of the London 'Adoration' (though grey undermodelling is found beneath several of the textiles). In this, as in many other respects, the Virgin's head, the Child's face and the heads of the other male figures are completely consistent in treatment.

Ainsworth considered that 'David may also have reworked the [Virgin's] draperies, and in particular his typically angular folds at the base of the cloak, which differ in configuration from the broader, looser ones planned in the underdrawing and the first paint stages'.69 The changes seem to respond to Gossart's addition of Caspar's sceptre, which is painted, apparently without underdrawing and certainly without a reserve, on top of the paint of the altered mantle (fig.16). 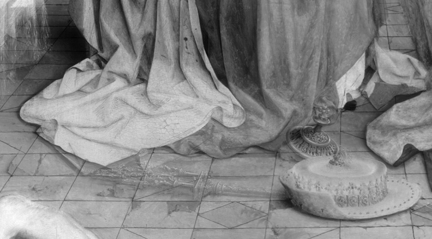 Ainsworth's suggestion that Gossart, returning from Rome in 1509, left his regular employment with Philip of Burgundy to spend some time in Bruges before returning around 1515–16 to Philip's service also seems unlikely.70 Geldenhouwer's near-contemporary account made it clear that Gossart remained with Philip; during the period between 1509 and 1516, he produced the 'Adoration' for one of Philip's closest associates, Daniel van Boechout.71 As will be demonstrated below,72 the complexity and ingenuity of its composition, as well as the extreme sophistication of its technique, are without parallels in David's work.