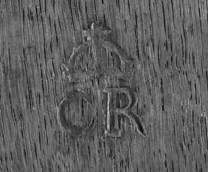 fig.1 Detail from the reverse of NG946, CR brand of King Charles I
View enlargement in Image Viewer 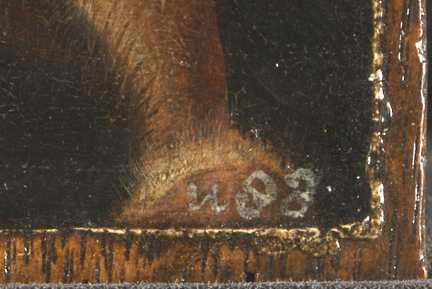 The portrait was in the collection of Charles I, King of Great Britain, whose CR brand is on the reverse (fig.1). It can be identified in van der Doort’s catalogue of the king’s pictures as a ‘Mantua piece’ which hung in the Cabinet Room off the Privy Gallery in the Palace of Whitehall.1 It was therefore purchased by Charles I from Mantua and must have belonged to Vincenzo II Gonzaga (1594–1627), Duke of Mantua; but it has not been identified in the 1627 inventory of his collection.2It was presumably sold from the Royal Collection during the Commonwealth but it was recovered for Charles II and placed in the King’s Closet at Whitehall, which was apparently arranged to imitate Charles I’s Cabinet Room.3 It remained at Whitehall in the reign of James II4 but appears to have been moved to Kensington Palace by William III and in 1697 and 1700 to have been hanging on the staircase there.5 It was certainly among the pictures removed by William III (died 1702) to the United Provinces and it was included in a list drawn up by Alexander Stanhope in 1702 of ‘pictures which were carryed to Holland’.6 By 1712 it was in the palace of Het Loo,7 near Apeldoorn (west of Deventer and north of Arnhem), where it formed part of the estate of the Stadholder Johan Willem Friso, Prince of Orange (died 1711). In 1712–13 Robert Du Val, curator of the Stadholder's collections, drew up another list of pictures claimed as Crown property by Queen Anne. No. 88 was ‘Een dito [sc. Een Pourtrait van Holbeen]’ (a ditto [Portrait by Holbein]); and 'n88' is written in white in the lower-right corner of NG946 in a characteristic script found on other paintings included in Du Val's list (fig.2).8 It subsequently passed to Johan Willem Friso’s son Willem IV (died 1751) and to his son Willem V (deposed 1802, died 1806); and it was still at Het Loo in 1757.9

How and when it returned to England are not known but it belonged to William Wells (1760–1847) of Redleaf in Kent (Landseer’s friend and patron) and was sold with the rest of his collection at Christie’s on 12 May 1848 (40). It was bought by Evans for Scarisbrick: Charles Scarisbrick (1801–1860) of Scarisbrick Hall and Wrightington Hall in Lancashire. His collection was dispersed at Christie’s in May 1861. NG946 was sold on 12 May 1861 (456) to the dealer Emery. It was afterwards, probably by 1863, in the collection of Wynn Ellis (1790–1875). On 18 November 1875 he made a will bequeathing his collection to the National Gallery. NG946 was one of two pictures, both described as ‘Holbein. Portrait of a Gentleman’, which were then in the library of his residence at 30 Cadogan Square;10 it was among the paintings accepted by the Trustees in 1876.

11. As ‘Portrait of a Man. Holbein’, lent by Wynn Ellis; but he owned another picture (now NG947) which might have been so described.