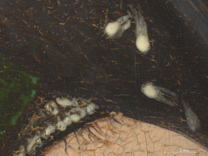 fig.3 Photomicrograph of NG946 showing drying cracks in the paint of the hat
View enlargement in Image Viewer

Cleaned in 1972, the portrait is in good condition. Drying cracks in many areas (fig.3) (which may indicate that the painter was using black without adequate dryers) have been retouched and there is some repaint in the background, where the overall tone is now too low and where the shadow cast by the sitter is scarcely visible. The red lake has faded in the sleeves and probably also in the tablecloth.

The panel is a single board of oak, vertical in grain and tangentially cut and has suffered some slight woodworm damage. The reverse of the panel has been slightly bevelled at the top and bottom to a thickness of 6 mm (measured at the centre of the lower edge). Dendrochronological investigation has established that the wood is Baltic oak and that the 136 growth rings were formed between 1341 and 1476.12 On the reverse are the crowned CR brand of Charles I and various chalk marks – only a figure 5 remains legible (fig.4).13 Unpainted wood and ‘barbes’, where the ground and paint end, survive along all four sides and indicate that the panel originally had an engaged frame that was in place before the ground was applied. The edges of the panel have evidently been trimmed. The ground is chalk, presumably bound in animal glue, and encroaches in places onto the unpainted edges where it has seeped under the original engaged frame (fig.5). The priming is a thin layer of lead white tinted with a very small amount of lead-tin yellow.14 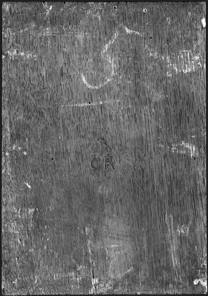 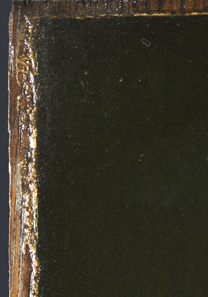 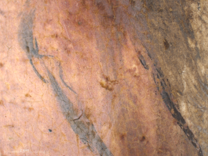 fig.6 Photomicrograph of NG946 showing underdrawing visible through the pink paint of the sleeve
View enlargement in Image Viewer 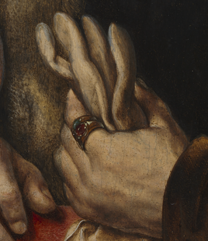 Very little that could definitely be called underdrawing was visible in the infrared photograph or by infrared reflectography. The lines for the folds in the pink sleeves, which are in a liquid medium, are the clearest (fig.6) and there may be some drawing for the features of the face. Infrared imaging also revealed changes that were made at the painting stage: in the glove, the finger on our left has been lengthened and the little finger and ring finger of the sitter's left hand have been extended over the fur of his gown (fig.7). Above his left elbow, the pink of the upper sleeve has been brought across the fur collar.

Two unusual pigments have been identified. Purple fluorite, mixed with lead white and a little red lake, occurs in the pink sleeves.15 The mineral pigment in the underpaint of the dark green background was found to consist of a green copper sulphate in addition to malachite (copper carbonate).16 This forms a relatively opaque underlayer in the green background, which is covered by a fairly thin glaze of verdigris partially dissolved in oil.17 The medium is linseed oil; no resin has been detected as an addition to the oil in any of the translucent green layers of the background, the pink sleeves or the red tablecloth, nor is there any evidence that any of the oil has been heat-bodied.18 The fur has been worked wet-in-wet (fig.8). The paint of the whites of the eyes has been feathered into the irises (fig.9). Similarly, the pink paint of the cheek is feathered into the shadow cast by the nose (fig.10), and the shadow cast by the fur at his collar is feathered into the white shirt, which in turn is feathered into the darker shadow beside it (fig.11). A ‘sgraffito’ technique seems to have been used to give texture to the tablecloth (fig.12). Lines from the beard and moustache are painted on top of the background and have beaded (fig.13). 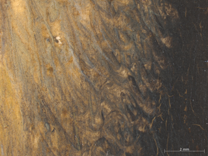 fig.8 Photomicrograph of NG946 showing the fur of the collar on the right
View enlargement in Image Viewer 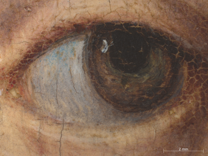 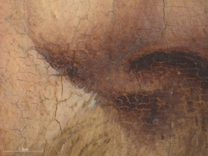 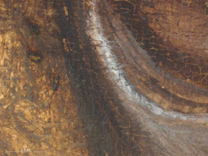 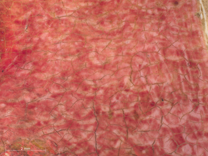 fig.12 Photomicrograph of NG946 showing sgraffito to give texture to the table cloth
View enlargement in Image Viewer 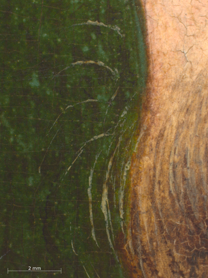 fig.13 Photomicrograph of NG946 showing beading of paint used for the beard and moustache
View enlargement in Image Viewer

14. A few particles of lead-tin yellow were detected in the priming layer using SEM–EDX analysis.

15. The use of fluorite is unusual in early Netherlandish paintings but it has been identified in a few works dating from around the same time as this portrait. See Spring 2000, pp. 21–4.

16. This is reported and discussed, together with other occurrences, in Spring 2000, pp. 21–24. The copper sulphate had a characteristic tabular particle shape visible in cross-sections under the optical microscope. It was identified using SEM–EDX but has not been further analysed to define the exact mineral species. Malachite was identified by FTIR microscopy (report in NG Scientific Department file by J. Pilc, 7 April 1994).

17. Information from Marika Spring; her memorandum of 5 April 2000 in the NG Scientific Department file on this painting.

18. Report in NG Scientific Department file by R. White and J. Pilc dated 14 December 1994. Analysis was carried out by GC–MS and FTIR microscopy.