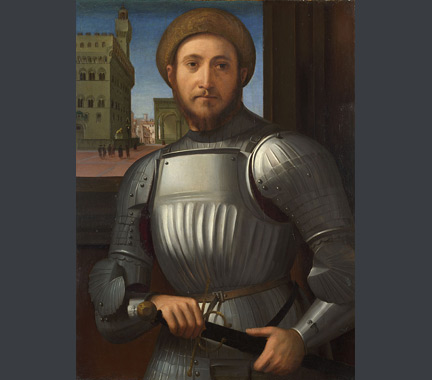 An infantry commander stands proudly against the background of the most important and politically charged urban space in Florence, the Piazza della Signoria, seen through the window of a building on the opposite side of the square.1 The medieval seat of government, the Palazzo della Signoria (now known as the Palazzo Vecchio), and half of the three-bay ceremonial portico, the so-called Loggia dei Lanzi, are carefully delineated. So too are the two sculptures adorning the ‘ringhiera’, the parapet joining the two doors of the palace, behind which the heads of government, known as the priors or the Signoria, were sworn in and sat on ceremonial occasions.2 The skilful perspective and the play of light on the jumble of buildings along the street in the background give a powerful sense of actuality, tempting us to interpret the painting as a snapshot of a particular moment, for the soldier is in the act of drawing his sword. But, although the architectural and sculptural detail is remarkably accurate, the composition is a carefully crafted fiction, in which the urban setting functions both to draw the spectator’s eye into a familiar location, and to reinforce the sitter’s role in the security of the city.

Unfortunately his identity is lost to us, so the original message remains mysterious. The uncertainty is especially tantalising, as this was a period of rapid and radical change in Florentine history. Depending on when the picture was painted and who is portrayed, the soldier could be seen as defending the city against threats to its republican liberty, revived since 1494, or as protecting the Medicean regime reinstalled through force in 1512.

The armour the sitter wears is of the so-called ‘Maximilian’ type, fluted in the German manner, and with a horizontal frieze at the top of the breastplate. Several suits of this type survive, usually dated around 1510–5. It is practical field armour without ornamental engraving, and the sword, which has a loop guard as well as a finger guard, is equally for use in combat. The sitter wears a ‘scuffiotto’ – a round, close-fitting, padded cap intended to contain the hair and cushion the head under a helmet, in this case not shown. We can tell he is an infantry commander, as there is no trace of a lance rest on the right side of the breastplate.3 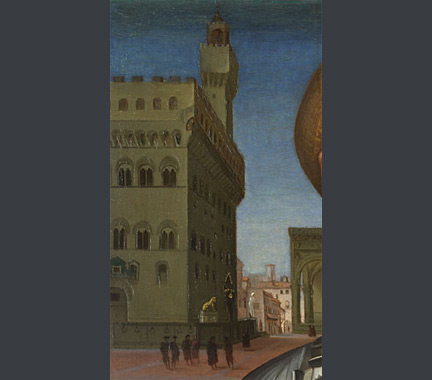 Another important element for the dating and meaning of the picture is the presence in front of the main west door of the palace of Michelangelo’s colossal marble statue of David, placed there on 8 September 1504. Its location was decided after a celebrated public debate, in which artists and architects gave their opinions. It replaced Donatello’s much smaller bronze group of Judith and Holofernes, which had been transferred here from the Medici palace in 1495. The Judith was placed in 1506 on the right of the Loggia dei Lanzi (where it can be seen in Vasari’s drawing). At this date, these were the only sculptures in the piazza, apart from the Marzocco, the lion of Florence on the corner of the ‘ringhiera’: its gilt stone surfaces and marble base are prominently shown in the National Gallery picture. Other lions, of which one is visible here, were placed at the corners of the machicolated gallery around the top of the palace.4 Just in front of the David, within the ‘ringhiera’, it is just possible to see the tiny figure of a man in full armour wearing a helmet, evidently guarding the palace.

This is an extremely unusual image in Florentine portraiture. Although there was a tradition of commemorating ‘condottieri’ (mercenary generals) in public monuments (as in the frescoes in the Cathedral by Uccello and Castagno of John Hawkwood and Niccolò da Tolentino), it is hard to think of another private portrait of a soldier wearing armour before the institution of the Duchy in 1530. After that time, the Medici rulers commissioned military likenesses of themselves, such as Vasari’s seated portrait of Duke Alessandro against a view of Florence (Palazzo Medici, Florence), and Bronzino's several versions of Cosimo I in armour – but these too are public images. Also interesting is the full-face depiction of the soldier, and his three-quarter-length stance. Both these seem to look forward to Pontormo’s portrait of Francesco Guardi (the so-called ‘Halberdier’, J. Paul Getty Museum, Los Angeles), but they also come out of the fifteenth-century tradition of Domenico Ghirlandaio, for example the portrait of Francesco Sassetti with a child in the Metropolitan Museum, New York.

A question of authorship

When the painting entered the Gallery’s collection in 1871, it was attributed to the Ferrarese artist Lorenzo Costa (1460–1535), who never worked in Florence.5 For many years it was given with a question mark to the brilliant and eccentric Florentine Piero di Cosimo (1462–1522), a suggestion made by J. P. Richter and endorsed in 1879 by Gustavo Frizzoni.6 But Piero di Cosimo’s idiosyncratic treatment of architectural backgrounds in his religious paintings and portraits is quite unlike the literalistic approach seen in our picture. In 1929 Carlo Gamba proposed the name of Ridolfo Ghirlandaio (1483–1561), son of Domenico7, but the only portrait sometimes attributed to him which displays any similarity to the ‘Man in Armour’ is the so-called ‘Monaca’ or 'Nun' (certainly a secular sitter) in the Uffizi, Florence, which has topographical views seen through windows in the background, including of Piazza Santa Maria Novella (fig. 2). This painting is now more usually given to Giuliano Bugiardini (1475–1554).8 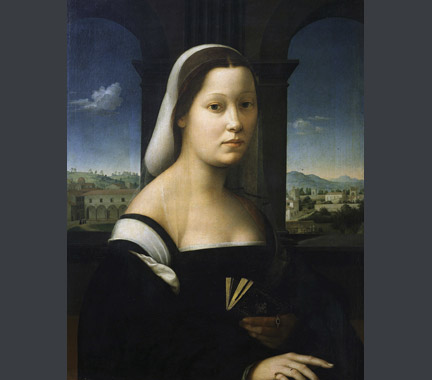 The National Gallery’s current attribution of the ‘Man in Armour’ to Francesco Granacci was first proposed by John Shearman.9 Granacci, like Bugiardini, came out of the workshop of Domenico Ghirlandaio, whose depiction of the Piazza della Signoria in the scene of the ‘Institution of the Franciscan Rule’ in the Sassetti Chapel of Santa Trinita is a direct precedent for the background of the National Gallery picture. (The two men in front of the Loggia dei Lanzi seem almost to be a quotation from Ghirlandaio.) 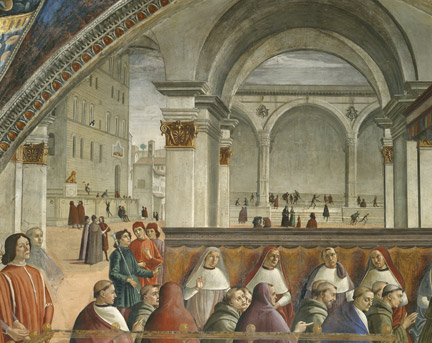 No portraits by Granacci are known, and Vasari reports none,10 whereas Bugiardini was a prolific portraitist.11 Attribution of portraits in this period is extremely difficult, but features such as the naive literalness of the National Gallery picture, the shape of the head and the awkward asymmetry of the eyes, do recall Bugiardini’s work.12

One clue to authorship might be the way in which this painting was prepared. During conservation treatment in 1972, after removal of overpainting and before restoration, Martin Wyld noted a quantity of dark red lines visible both in the armour and in the buildings behind, where paint had flaked off the incised initial drawing.13 These have been carefully touched in, but the edges of the preparatory lines can still be seen in raking light, not always corresponding to the final contours. (It was common at this period for architecture in paintings to be prepared by incision; here one could say that the armour was treated like a building.)

The Piazza della Signoria in Florence had been the subject of one of Filippo Brunelleschi's two famous (but lost) painted panels demonstrating the principles of linear perspective. He showed the Palazzo della Signoria in a corner view, its façades receding towards two vanishing points at the sides.14 Painters who depicted the piazza subsequently preferred to adopt a view with a central vanishing point, either facing south as here, or west towards the Palazzo della Mercanzia (as in the celebrated paintings of the Burning of Savonarola in 1498).15 Such views were facilitated by the piazza’s distinctive paving, rectangles of herringbone brickwork in a grid of grey Florentine sandstone (dating back to the 14th century, and renewed from 1507).16 Alberti’s standardisation of painter’s perspective in his ‘Della pittura’ (1435) recommended plotting out the picture space with a squared pavement, and this may have influenced how the piazza was subsequently visualised. Certainly central vanishing-point perspective in painting effected a radical shift in the way contemporary viewers perceived and experienced actual urban spaces.

It is slightly shocking to find a man in full field armour portrayed in such a quintessentially civic setting as the Piazza della Signoria. But the piazza had always had a military role: not only had the banners of the civic militia traditionally been handed over to their leaders in the piazza, but at times of political crisis, the populace was summoned there to agree in a plebiscite called ‘parlamento’ the appointment of emergency councils, the entrances to the piazza then being blocked by soldiers. In the years after 1502, when republican Florence had a Gonfalonier (principal magistrate) for life in Piero Soderini, the civic militia (in fact composed of recruits from the subject countryside) was programmatically revived on the urging of Niccolò Machiavelli, and was occasionally mustered on the piazza. ‘He who holds the piazza is always victorious in the city’ had become a proverbial saying, and when the Medici returned to the city in 1512, the piazza was indeed seized by their armed supporters, and a ‘parlamento’ held.17

So the question remains: who is the soldier who looks out from this portrait, alerting us that his sword can be swiftly unsheathed? It has recently been suggested that he might be Don Micheletto Corella, the first captain (1505–7) of Florence’s revived civic militia, but it is hard to reconcile the surprisingly mild expression of our sitter with the violent reputation of Cesare Borgia’s ‘strangler’, who was dismissed by the Florentines in 1507 and murdered in Milan the following year.18 And who are the group of men in the middle ground? Dressed in fashionable civilian clothes and hats, they are not soldiers, but they are armed with swords: an indication that we are on the brink of a world in which the wearing of swords in public places would no longer be frowned upon.19

The painting was bequeathed to the National Gallery in 1871 by Colonel Sir Anthony Coningham Sterling, KCB (1805–71), a professional soldier who served in the Crimea and was military secretary to Lord Clyde in the suppression of the so-called Indian Mutiny. From the late 1840s Sterling had been a keen portrait photographer, and he is the author of the Carlyle Album in the National Portrait Gallery, containing many images of Thomas Welsh Carlyle and his circle, including several artists. It is easy to see why this quasi-photographic image of a Renaissance soldier should have appealed to Sterling.

To cite this essay we suggest using
Caroline Elam, ‘Attributed to Francesco Granacci, Portrait of a Man in Armour’ published online 2014, in 'Building the Picture: Architecture in Italian Renaissance Painting', The National Gallery, London, http://www.nationalgallery.org.uk/research/research-resources/exhibition-catalogues/building-the-picture/place-making/granacci-portrait-of-a-man-in-armour