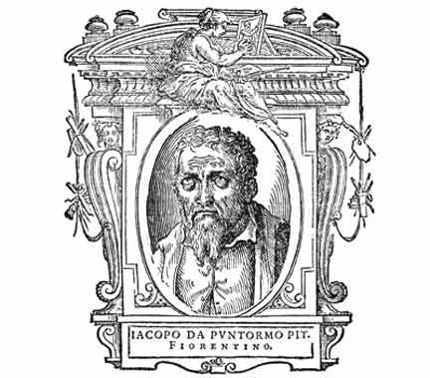 Pontormo was a major Florentine painter of the 16th century, and the main exponent of an early, expressive form of Mannerism. His name was Jacopo Carucci, but he is called after his birthplace, a village in Tuscany.

The four paintings in the Collection telling the story of Joseph were carried out as part of a scheme of bedroom decoration. Their high, brilliant colour owes a great deal to Michelangelo's newly unveiled (1512) Sistine Chapel ceiling frescoes. Andrea del Sarto was an important influence on Pontormo's earliest work, and Michelangelo afterwards. He was also influenced by Northern art, especially the prints of Dürer and Lucas van Leyden.

In addition to his works on panel, Pontormo is also celebrated for his frescoes, such as the Passion series of the Charterhouse of Galluzzo and his deeply expressive drawings, including those for the great decoration of the choir in San Lorenzo (1546-56), destroyed in 1742.

A surviving diary, and the recollections of contemporaries, indicate that he was solitary and neurotic. He was, however, on excellent terms with his pupil Bronzino, whose portrait, as a boy, is included in 'Joseph with Jacob in Egypt'.

Joseph sold to Potiphar
Pontormo
This picture formed part of the decoration of the bedroom of Pierfrancesco Borgherini in the Borgherini palace in Florence, and was commissioned to celebrate his marriage in 1515. The story is taken from the Old Testament (Genesis 39: 1). Joseph had been his father’s favourite son and was given a...
Not on display
Joseph with Jacob in Egypt
Pontormo
This was the latest and most advanced of a series of panels that were made to decorate the bedchamber of the Florentine banker Pierfrancesco Borgherini on the occasion of his marriage in 1515. The paintings, commissioned by Pierfrancesco’s father, tell the Old Testament story of Joseph. Five othe...
Not on display
Joseph's Brothers beg for Help
Pontormo
This picture was commissioned to celebrate the marriage of Pierfrancesco Borgherini to Margherita Accaiuoli in 1515. It formed part of a series that decorated their bedroom in the Borgherini palace in Florence. Several paintings by Pontormo and Bacchiacca from the series are now in the National G...
Not on display
Pharaoh with his Butler and Baker
Pontormo
This is one of the panels that decorated Pierfrancesco Borgherini’s bedroom in his palace in Florence. They tell the Old Testament story of Joseph and were probably originally set into furniture. Five other panels from the series are also in the National Gallery.Joseph was his father’s favourite...
Not on display
A Discussion
Circle of Pontormo
Two men, in robes of icy blue and pink, are engaged in a heated discussion, their expressive hands emphasising their strenuously argued points. They are watched by two bearded men; another, in green, looks at the bare wall in the background.The subject of the painting is unclear. It was once iden...
Not on display
The Madonna and Child with the Infant Baptist
Follower of Pontormo
The Christ Child sits on his mother’s lap holding her hand and smiling at us. His cousin, the young Saint John the Baptist, stands grinning behind the Virgin. The happy, exuberant expressions of the children contrast with the pensive mood of the Virgin. Christ’s right hand is raised in an implied...
Not on display