Perspective14 has dominated art-historical writing on depicted architecture for so long that other approaches have been buried or undervalued.15 This catalogue continues to explore perspective, but seeks to embed it within architectural and spatial representation, treating it as one aspect of fictive architecture, rather than a separate practice. Perspective has often been presented as the most important contribution of Italian Renaissance artists to the world, linked to the idea that realism was the ultimate goal of 15th- and 16th-century Italian painters, so that the depiction of deep pictorial space created a type of virtual reality for Renaissance viewers. We have sought to question this view by challenging a simplistic notion of realism in Renaissance art. Since buildings are the most stable, large-scale and space-filling of human products, they are in many ways the ultimate object or real thing, and the temptation is to see their inclusion in pictures mainly as an attempt by artists to make their pictures look real. Yet, even when painting recognisable portraits of existing buildings, the artists included in this publication manipulate them for symbolic, ceremonial, sacred or political purposes, and in most representations of architecture the metaphor, the sign, the archetype, the ideal, and in some cases a feeling, prevail over any semblance of the actual or the real. 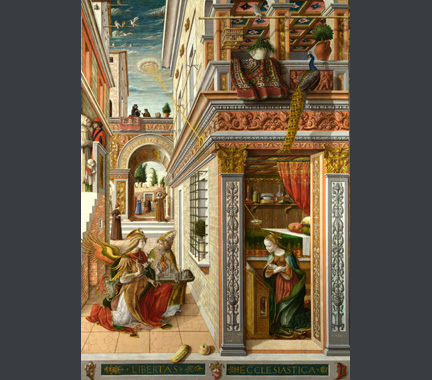 Carlo Crivelli's ‘Annunciation’ (fig. 4) is a prime example. Perspective plays an important role in creating the view of the street, but the façades of the Virgin’s palace on the right, with their extraordinary rendering of surface detail, seem to compete with and triumph over perspectival recession. The painting was a site-specific work, commissioned for the Church of the Annunciation in the town of Ascoli Piceno to mark a specific moment in 1482 when the city was granted greater independence by Pope Sixtus IV.16 The image therefore has special meaning in the context of the town and contains obvious references to Ascoli, such as the miniature model of the city held by its patron saint, Emidius. Yet Crivelli did not take up the opportunity to represent the actual buildings of Ascoli realistically on a larger scale, and instead concocted wonderful architectural fictions for the street, the Virgin’s house and surrounding buildings.17 An unsettling, uncanny effect is created by the hyper-precision with which these structures are outlined – like a Renaissance version of hyper-realism – combined with utopian, symbolic and miraculous features. The whole design and conception is simultaneously literal and fantastic, which produces its strange, compelling quality.

Another aspect of perspective studies that has emerged during the last 30 years is that mathematical perspective as it was invented (or reinvented) by Brunelleschi in the first decade of the 15th century is presented by scholars as a western European system of representation which was disseminated through the academies and proceeded to dominate European art until the late 19th century. Perspective has been interpreted as an imperialist model which needs to be brought into relation with other non-Western modes of perception and representation.18 By exploring other meanings, uses and perceptions of architectural painting, we hope to show that, for most Italian artists, perspective was a tool, but not the ‘raison d’être’ behind a work; and that many painters misunderstood, disobeyed or reinterpreted its rules. Examining Italian paintings between about 1426 and 1490 we often gain a sense of enthusiastic engagement and experiment with perspectival constructions, but by the beginning of the 16th century the keenness of the newly converted had dissipated, and rather than submitting to a perspectivally driven regime, artists tended to present more muted versions of single point perspective or chose different spatial models, as Parmigianino did in his ‘Madonna and Child’ (fig. 5). 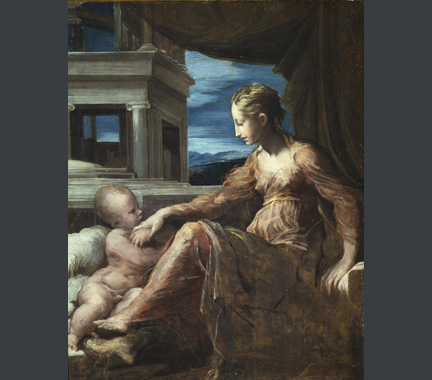 Optical illusion does not necessarily depend on mathematical absolutes and, with a few important exceptions such as Piero della Francesca, it seems that painters were more concerned with achieving a level of visual plausibility than with the rigorous application of theoretical models. Perspective was designed to fulfil the needs of the picture (not vice versa), and a series of other conditions and criteria were at stake: the knowledge, skill and aesthetic preferences of the artist, the demands of patrons, the ways in which the site might determine the viewpoint, and the requirements of the subject matter. Thus, a painting which has often been considered a perspectival manifesto, Masaccio’s ‘Trinity’ fresco, has been shown to bend the rules of one-point mathematical perspective, probably because it looked better that way (fig. 6).19 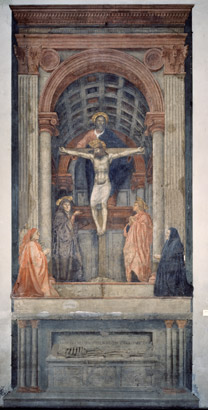 It is doubtful whether most artists ever intended or wished to create an entirely homogeneous mathematical space, nor did they have a concept of what Panofsky termed ‘psychophysiological space’.20 Their pictorial architectures were elaborate inventions conceived in relation to their narratives, their spiritual requirements, the people and places for which they were working, and formal prototypes established in their own workshops, in those of their peers and predecessors, or which had been inspired by visits to ancient or medieval sites. Perspective is therefore one of many strands woven into the picture. An exploration of one of the building blocks of perspectival construction – the geometric pavement – helps us to interpret its varied and flexible applications.