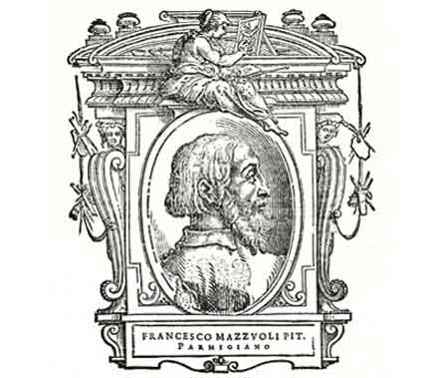 Parmigianino was the leading painter of Parma after Correggio, and is celebrated as one of the originators and leading exponents of Mannerism. He was indebted also to the work of Raphael and Michelangelo, evolving a personal manner, expressive and stylish, that influenced later painters in Italy and, by means of his widely disseminated etchings, throughout Europe.

Parmigianino was active mainly in Parma before moving to Rome in 1524, and after the Sack of Rome by Imperial troops in 1527 to Bologna. His last years were spent mainly in Parma and partly, according to Vasari, in the pursuit of alchemy.

His elegant decorative scheme for the church of the Steccata, Parma, was never completed. It anticipates by some hundred years Bernini's integration of painting and three-dimensional architectural/sculptural elements. In addition to his fame as a painter, he was also celebrated as a prolific draughtsman and etcher.

Portrait of a Collector
Parmigianino
An unknown man sits at an inlaid table wearing a large black fur-lined coat and black hat. His eyes do not fix on us but appear to be watching something slightly to our left. He holds the so-called Durazzo Book of Hours by Francesco Marmitta, created about 20 years earlier (now in the Biblioteca...
Room 8 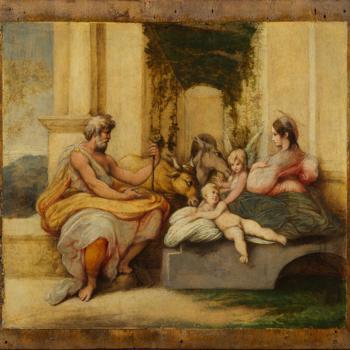 Rest on the flight into Egypt
Parmigianino
Not on display
The Madonna and Child with Saints
Parmigianino
This altarpiece was commissioned for a burial chapel in San Salvatore in Lauro in Rome. However, the political turmoil following the Sack of Rome in 1527 meant that it was never installed there. According to the art biographer Vasari, Parmigianino was working on this picture when imperial troops...
Not on display
The Mystic Marriage of Saint Catherine
Parmigianino
The infant Christ places a ring on Saint Catherine’s finger in her vision of a ‘mystic marriage’. Parmigianino has positioned the gold ring with a blue stone at the very centre of the painting. Beside Saint Catherine is the spiked wheel upon which she was tortured for her Christian faith.The iden...
Room 8
Virgin and Child
Parmigianino
Room 8