The words ‘compose’ and ‘composition’ may be helpful for understanding how architecture could underpin the process of picture designing in this period. To compose – literally, to put together – a picture, presupposes that there is a series of elements to be arranged and fitted together within a unifying matrix.  In ancient Rome the Latin verb ‘componere’ was used for speeches, texts, and especially for constructing a building or a city, rather than for painting.1 In his ‘De architectura’ ('On Architecture', about 15BC) Vitruvius frequently used the verb ‘componere’ and its derivatives,2 and although he did not develop a theory for its application to architecture, he seems to have employed composition in conjunction with ‘ratio’ (‘rationem compositionis’) to refer to a building with a regular design or rational plan, one that had been well put together.3 In the 1390s Cennino Cennini, whose ‘Libro dell’arte’ ('Craftsman’s Handbook') has been undervalued as a theoretical work, was already making precise and strategic use of the verb ‘to compose’, showing it was understood in the modern pictorial sense:

'Then, if the plaster is dry, take the charcoal and draw and compose the story or figures you need to create, carefully taking each of your measurements, snapping first with strings onto the surface of the wall and marking the centres of each section of the wall … Then, as I said, compose stories and figures with the charcoal, and plan your spaces so they are always symmetrical and equal'.4

According to Cennini’s account the key to establishing the composition on a wall is to measure the area, to establish the central points in each scene to be painted, and design compositions around those central points. Working in scale and in a regular manner is crucial, so the work is balanced and symmetrical. This is not dissimilar to surveying techniques or to measuring a building site, using lines or strings to measure and to establish centrally positioned focal points and intersecting axes. The flat surface of the picture is treated as a geometric field to be symmetrically divided, the measurements of the parts marked on the picture plane before lines are ruled or incised to structure the whole composition.5 These techniques were in use all through the 15th century and were still current in Raphael’s time. 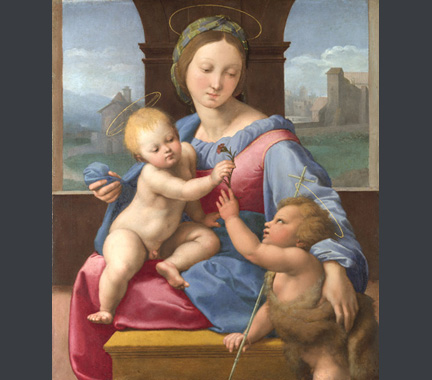 Raphael’s ‘Garvagh Madonna’ (figs. 2 and 3) is a prime example of this practice in panel painting, the underdrawing revealing how Raphael began by dividing the panel into four equal parts with ruled lines. 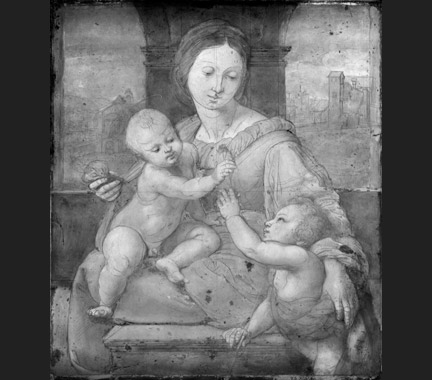 3. Underdrawing of 'The Garvagh Madonna'.

The central vertical became the axis for the Virgin’s head and body, while the main horizontal line, placed at bust height for the Virgin and Child, was used to establish the lower ledge of the window openings. This simple regular geometric structure underpins the whole picture and, together with the massive stone presence of the central pier, helps to create a fully resolved, reassuring image of harmonious balance and grounded stability.6

In Alberti’s treatise ‘De pictura’ ('On Painting', 1435), composition (‘compositio’) was given far greater emphasis as one of the three essential tasks of the painter, along with circumscription (‘circumscriptio’) and the reception of light (‘luminum receptio’). Of these three, it is composition which plays the most pervasive role. Although Alberti begins by defining ‘compositio’ straightforwardly as ‘that procedure in painting whereby the parts are composed together in the picture’,7 under the same heading he goes on to recommend that the whole image be designed in a way that is appropriate for the narrative, the subject, and the figures, with the aim of holding the gaze and moving the soul of the beholder.8 It is often forgotten that the most quoted sections of Alberti’s text on ‘istoria’ and decorum are actually subsumed within the category of composition. This takes ‘compositio’ much further than Vitruvius and Cennino Cennini had done, giving it a primary conceptual and connective role.9 In prioritising composition Alberti demonstrated the importance of the initial planning phase of painting, working out the narrative and expressing it visually in a well-ordered, unified and communicative way.

Although Alberti does not discuss the representation of architecture except in a passing reference to buildings (‘aedificia’) as one component of a richly varied painting,10 in his section on perspective in Book I of ‘De pictura’ he does note that the design of squared pavements belongs to the compositional phase of picture planning.11 The technical evidence from many of the works in this publication, and from a vast body of other late medieval and Renaissance paintings, demonstrates how perspectival designs together with architectural frameworks were normally incised or drawn onto the picture surface at the start. At the very least, architecture and figures were conceived in relation to each other, and architecture could affect not only the placing of figures, but their scale, grouping, pose, gesture, and even colour scheme. Compositions were frequently generated around framing devices such as arches, doorways and windows; or they employed splendid buildings as a dominant mass around which to configure other elements.12

Partly because it was the only complete treatise on any of the visual arts to survive from antiquity, Vitruvius’s ‘De architectura’ became a canonical text, cited as an authority by Cennino Cennini, Ghiberti and Alberti when they were writing about painting and sculpture, as well as architecture. Writings on art in this period did not always make clear distinctions between the practice of painting, sculpture and architecture, and at a theoretical level they were bound together by shared principles. One of these fundamental precepts was ‘misura’ (measure), which governed art and architecture through a series of measured relationships and gave order to matter. The essence of both art and architecture lay in number, dimension and proportion. Although Vitruvius’s modular system of proportions was known throughout the Middle Ages, it was not applied with rigour or consistency before Brunelleschi's adoption of modular design around 1418. Yet Cennino Cennini had already promoted its use shortly before 1400:

'As the prime measurement which you adopt for drawing, adopt one of the three which the face has (either the head, or face, or the chin and mouth) … And if you adopt one of these, it serves you as a standard for the whole figure, for the buildings and for relating one figure to another; and it is your perfect guide, for using your intellect you will know how to control the measurements according to the system outlined above … And if at first the proportion of your story or figure does not come out right … keep starting it over until you see that your figure corresponds in proportion with the model.'13

Here Cennini is applying a modular system we normally associate with Vitruvius and architectural design to painting. Measure or scale (‘misura’) is personified as the ideal guide to lead the artist. But perhaps the most significant feature of Cennini’s advice is his selection of human body parts – the head or face – as the unit of measurement and the basis for his proportional system. This showed painters how to generate a work of art based on human scale and proportions, thereby creating a type of painting which was both anthropomorphic and geometric.