Throughout most of the 20th century, scholars have agreed that the National Gallery’s The Virgin and Child with Two Angels was produced in the workshop of Andrea del Verrocchio. However, they have not been able to agree on whether Verrocchio himself painted any part of it, or if he ever painted at all. Re-examination following a new restoration has confirmed that Verrocchio was indeed involved, and has led to the identification of Lorenzo di Credi as the second hand evident in the painting. 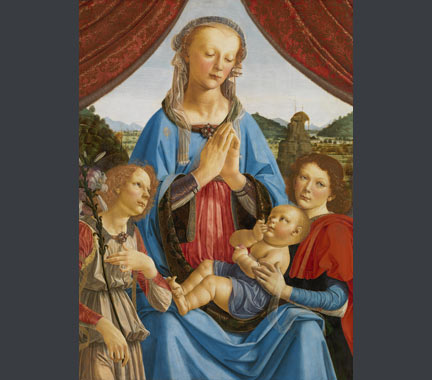 Andrea del Verrocchio and assistant (Lorenzo di Credi), The Virgin and Child with Two Angels, about 1476–8

‘The Virgin and Child with Two Angels’ was sold to the National Gallery in 1857 as a work by Piero della Francesca, from the Sensi-Contugi collection in Volterra, Italy, through the Florentine dealer M.L. Humbert. Before being shipped to London, it was sent to Milan for restoration. Upon arrival at the Gallery, its attribution was promptly changed, and it appeared in the Gallery’s catalogue of 1859 under the name of Domenico Ghirlandaio.

This was only the first of several changes of mind, however. The following decade saw a range of suggested attributions, ranging from the Pollaiuolo brothers to Leonardo da Vinci, until in 1864 the art historians Crowe and Cavalcaselle finally gave it to a pupil of Verrocchio, Lorenzo di Credi. While the association with Verrocchio has met with widespread acceptance, there has been little consensus over the degree of workshop participation in the painting’s production and it has often been assigned to other painters associated with Verrocchio’s workshop. Indeed, as Verrocchio is chiefly remembered as a sculptor and his painterly output is so poorly known, it has sometimes been speculated that he did not paint at all.

In 2008 the decision was taken to conserve several Gallery paintings associated with Verrocchio, including ‘The Virgin and Child with Two Angels’. Investigation of the panel, which is probably poplar, revealed that it has not been cut. It may have been set into a marble or stone surround, a somewhat unusual arrangement at this date. Analysis of the pigments and technique showed that they were entirely consistent throughout, despite employing several techniques for representing gold (and providing the only known example of a Florentine painting using mosaic gold, or tin sulphide, which has hitherto only been found in north Italian pictures).

Infrared reflectograms revealed extensive underdrawing. The heads, hands and baby all show evidence of pouncing – a method of transferring a design by dabbing a pricked drawing (or secondary sheet) with powdered charcoal or chalk to produce a series of dots on the surface below – while the remainder of the composition is underdrawn freehand. 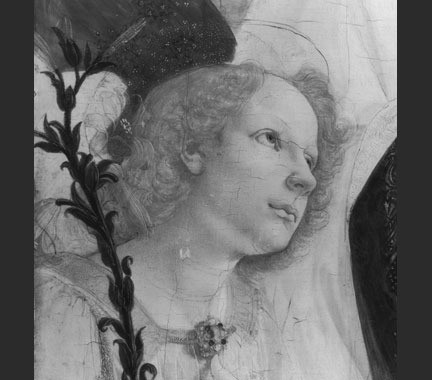 Detail of infrared reflectogram, showing pouncing in eyes to angel on the left hand side

Several of Verrocchio’s drawings – including the study of a head preserved in Christ Church, Oxford – are pricked for transfer. Pouncing was evidently common practice in Verrocchio’s workshop for the transfer of a design.

Although scientific analysis yielded considerable information about the painting’s materials and technique, it could not help with determining who in Verrocchio’s workshop was responsible for its production. Close observation of the painting indicates the presence of two painters. It is perhaps appropriate that their differences are most evident in a comparison of the angels’ hands. The hands of the one on the left are fragile and almost painfully elegant, with a clear sense of the underlying tendons and veins. In comparison, the hand of the one on the right seems flaccid, the artist adopting a heightened contrast of highlight and shadow in an attempt to evoke rounded forms. 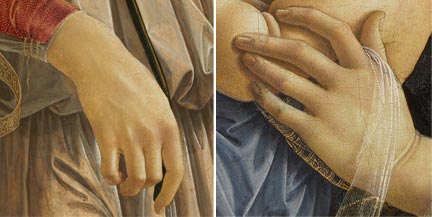 One artist appears to have been responsible for the Virgin, the landscape and the angel at the left, and the other for the infant Christ and the angel at the right. It has been suggested that one of the artists is Verrocchio himself and the other his talented pupil Lorenzo di Credi. The baby’s turned-up toes, for example, can be seen in later paintings by Lorenzo. The expressive beauty and subtle handling of the other angel, however, find their closest parallel in drawings and sculptures by Verrocchio himself. So compelling are these comparisons, in fact, that ‘The Virgin and Child with Two Angels’ may well become a touchstone for future attributions to the elusive painter Verrocchio.

J. Dunkerton and L. Syson, ‘In Search of Verrocchio the Painter: the cleaning and examination of “The Virgin and Child with Two Angels”’, ‘The National Gallery Technical Bulletin’ 31, 2010, pp. 4–41