Saskia van Uylenburgh was a central part of Rembrandt's early life and career in Amsterdam, They married in 1634. He made the most of her social connections and large dowry - she benefited from his status as a rising star. What ideas are communicated about his wife from this painting? Do you notice anything about her body? 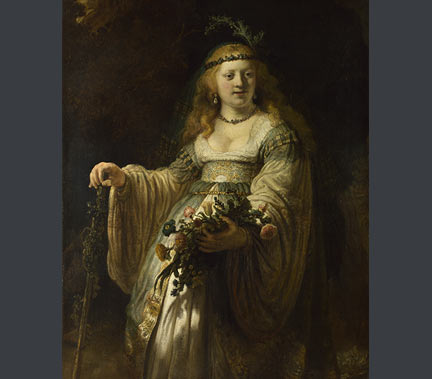 Saskia has been dressed in a costume that presents her as an idealised version of a shepherdess, or maybe even a goddess. The high bodice and full skirt accommodate her heavily pregnant form, and Rembrandt emphasises the idea of fertility by giving her an armful of flowers. 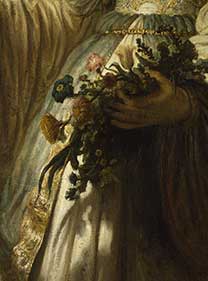 However, this might not have been a private painting made to celebrate the imminent arrival of the couple's first child. Rembrandt often used his wife as a model for compositions that he intended to sell, and she may simply have been the starting point for a painting that he hoped potential buyers would find appealing.

Technical examinations have shown that Rembrandt made extensive changes to this painting, and seems to have had a different idea in mind at the start. Saskia may originally have been shown as the Biblical heroine Judith. Instead of flowers in her hand, she would have held the severed head of Holofernes (an enemy army commander that she had just killed). Imagine how different the painting would have been, and what different ideas it would have evoked.

Rembrandt was not only ambitious in his portraits. He also wanted to make great history paintings.

Next: Dramatic scenes - the writing on the wall