Saskia van Uylenburgh, the daughter of a burgomaster of Leeuwarden in Friesland, was Rembrandt’s first wife. Here, she is 23 years old; they have been married for a year. She is dressed as Flora, the Roman goddess of spring and fertility.

Her gorgeous gown is a seventeenth-century version of Renaissance dress and she carries an enormous bunch of spring flowers that includes tulips, roses, primulas and tiny pinks. More flowers decorate her neck and forehead. Pearls hang from her ears and peep from the crown of her head. Delicate green leaves wind round the stick in her other hand.

In their seven years of marriage, Saskia had four children. Only their son Titus survived. A year after he was born, Saskia died, so the ‘goddess of spring’ never reached the summer of her life.

Saskia van Uylenburgh, the daughter of a burgomaster of Leeuwarden in Friesland, was 23 years old and had been married to Rembrandt for a year when he painted her portrait. She is in Arcadian costume (in other words, dressed as a shepherdess, though a very grand little shepherdess).

She has gold embroidery on her wide belt and on the brocade edge to her spring-green over-gown. Her sumptuous dress bells out over her cream satin petticoats and the light, almost transparent sleeves fall at her sides in gauzy folds. The low wide neck pushes up her breasts, edging them with delicate lace. Her long red hair waves down to brush her shoulders, and glowing pearls hang from her ears and peep over the crown of her head. The necklace of tiny wild flowers is echoed around her brow and a sprig of juniper sways over her head.

Her costume is not of the seventeenth century, nor of Roman times: it’s a dressing-up version of Renaissance dress, something that Rembrandt liked to use for intimate portraits and the big biblical scenes he aspired to paint, regardless of when they were actually thought to have taken place. They added drama or poetic meaning to the picture.

The painting is sometimes referred to as ‘Saskia as Flora’, the Roman goddess of spring and fertility, a title much more in keeping with her costume and with the profusion of flowers that she holds, primulas, tulips, roses and tiny pinks among them. In the other hand is her shepherdess’s stick, entwined with delicate green leaves. At the time, such classical representations – the Seasons, Greek or Roman gods and goddesses or more abstract figures such as Justice, Mercy, Envy – were popular in all the arts. Poets, writers and composers all looked back at the ancient world for inspiration.

But it’s possible that there’s another dimension to this portrait. Saskia grasps the stick firmly as if for support, rather than just as a decorative prop. The hand clutching the flowers is stiff and tense from the weight and unwieldiness of the bouquet. She appears to lean back slightly, as if easing discomfort, carrying unaccustomed weight. Suspended across her gown just below the waist, a little chain draws attention to her belly. Her expression is difficult to decipher. Her large blue eyes gaze not at us, but a little over to the right to someone standing near – the artist perhaps. Her oval face with soft cheeks is enlivened by a little half-smile. We can‘t discount the possibility that when Saskia stood as the model for this painting she was visibly pregnant, and that Rembrandt has portrayed her as such.

During the seven years of their marriage, Saskia had three children who died very young. Only the fourth child, Titus, survived into adulthood. Titus was born in 1641. Saskia died a year later and Titus in 1668, a year before his father. So for Rembrandt, although the promise of abundant life was fulfilled for a while, it didn’t endure – except in his portrait of Saskia as Flora, goddess of spring. 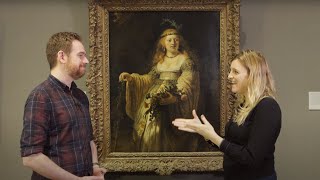 Rembrandt’s 'Saskia van Uylenburgh in Arcadian Costume' is travelling the UK in 2022 and 2023 as part of our Masterpiece tour. Ed, one of our Educators, and Laura, our Associate Curator of Renaissance Painting, explore the stories surrounding this po...