Hans Holbein the Younger, The Ambassadors

Jean de Dinteville, the man on the left, is shown on his second diplomatic mission to England on behalf of Francis I, King of France. To the right is his close friend, Georges de Selve, Bishop of Lavaur. This portrait was painted at a time of religious upheaval in Europe. Although the pope had refused to annul Henry VIII, King of England’s marriage to Catherine of Aragon which resulted in a break with the Roman Catholic Church, in 1533 he married Anne Boleyn. The array of objects on the table seem to allude to discord; the arithmetic book, for example, is open at the page concerning mathematical division.

The portrait is a supreme display of Holbein’s skill in composing images and in manipulating oil paint to recreate a variety of textures. If viewed from a particular angle the elongated shape between the men’s feet becomes a skull. Equally hidden at the top left of the picture is a crucifix that hints at the hope of redemption in the resurrected Christ.

This grand double portrait by Hans Holbein, the most accomplished portraitist of the sixteenth century, does more than show off the wealth and status of its sitters. It was painted at a time of religious upheaval in Europe – Henry VIII, King of England, would soon break with the Roman Catholic Church as the pope would not annul his marriage to his first wife, Catherine of Aragon. The objects on the table seem to allude to the complexities of the political climate. It’s also a supreme display of Holbein’s skill in composing images and in manipulating oil paint to recreate a variety of textures.

Holbein made this painting on his second trip to England in the early 1530s. We know that he was working on it in 1533 as he has dated it beneath his signature on the marble floor behind the figure on the left. The artist did not usually sign his paintings and the signature here is more elaborate than other known examples, suggesting that he was particularly proud of this work.

In the same year as the portrait was painted, Henry married his second wife, Anne Boleyn. He bypassed papal authority by doing so, establishing the Church of England as independent from Rome and placing himself at its head. The break of religious and political ties with Catholic Europe was worrying for Francis I, King of France. The man on the left is his ambassador Jean de Dinteville, whom he had tasked to report back to him on the situation. Dinteville, one of Francis’s most trusted courtiers, attended the wedding on the King’s behalf. This was his second diplomatic mission to England and he would visit the country a further three times, conveying messages between the two monarchs. The man to the right is his close friend Georges de Selve, Bishop of Lavaur. Selve was also on a diplomatic mission, although we do not know its exact nature. Four years earlier he had attended the Diet of Speyer, a conference at which the Holy Roman Emperor Charles V attempted to reconcile Catholics and Protestants. Both men were in their twenties when this was painted: Latin inscriptions on the scabbard of Dinteville’s sword and the edge of the book on which Georges is leaning reveal that they are 28 and 24 years old respectively (‘aetatis suae 25’, meaning ‘he is in his 25th year’).

Dinteville was required to stay in London for Anne’s coronation in June and for the birth of Henry and Anne’s daughter Elizabeth in September (Francis was her godfather). Surviving correspondence reveals that Dinteville was very unhappy on his extended visit. He described himself as ‘the most melancholy, weary and wearisome ambassador that was ever seen’, but the arrival of his friend, who was in London briefly from April to June, cheered him up. This portrait commemorates their friendship, as well as this brief stint together in England. By placing the table between them, Holbein separates the two men but also provides them with a prop to lean on, so they appear to be posing naturally.

The table also offers space to display a wide range of objects. Renaissance portraits often included objects such a musical instruments, coins, books or flowers, enriching the portrayal of the sitter by alluding to their hobbies, intellect, culture, marital status or religious fervour. As a group, these objects have been interpreted as a visual essay on the religious and political turmoil of mid-sixteenth-century Europe. The top shelf shows instruments used to measure time, altitude and the position of the stars and other celestial bodies. On the far left is a celestial globe, mapping the position of stars and planets; the multi-faceted box-like object with dials on each face is called a polyhedral dial, a type of sundial. Such objects were made by Henry VIII’s royal astronomer, Nicholas Kratzer: Holbein’s portrait showing Kratzer making a polyhedral dial is in the Louvre, Paris. Technical instruments like this were extremely precious, and their inclusion also shows off the men’s understanding of mathematics and science.

The lower shelf is devoted mainly to music. It is dominated by a lute, its case abandoned face down on the floor; one of the strings is broken. The book to the left is an arithmetic book, wedged open with a set square on the page relating to mathematical division. Under the neck of the lute, resting on a set of flutes – one is missing, which suggests a lack of harmony – is a Lutheran hymn book. The script and score are clear enough to read, revealing that Holbein deliberately chose to show two pages which do not follow each other in the standard form of the Lutheran hymn book. The hymns are ‘Come Holy Ghost’ and ‘The Ten Commandments’, which Georges may have wanted to include because they express Christian unity. The globe on this shelf is terrestrial and includes the hamlet of Polisy, about 200 kilometres south-east of Paris, where Dinteville had his chateau and where this painting would hang: an inventory dated 1589 records it decorating the Great Hall.

Visitors to Polisy would have been able to admire the grandeur and intellect of the sitter, whom we assume developed the picture’s rhetoric in conversation with the artist, as well as Holbein’s incredible technical skill. The sheen of Dinteville’s pink satin tunic is dazzling, its smoothness contrasting with the rich, dense lynx fur lining his black cape. Holbein has painted the individual hairs around its edges, giving a sense of its luxuriously soft texture. The gold tassels hanging from the scabbard of Dinteville’s dagger were created using Holbein’s usual gilding technique: he painted the individual strands in a brownish colour, covered them with a layer of oil mordant (a sticky substance which acted like a glue) and then secured gold leaf to create these delicate, swaying threads. Despite its detail, areas of the picture betray the speed with which Holbein was working. We can see the individual knots of the Turkish carpet on the table; the grey areas are underpainting which Holbein has simply left bare, only altering the tone slightly here and there to show how the textile ripples slightly at the edges.

Renaissance portraiture was often commissioned as a reminder of the frailty of life, or memento mori. The most unusual element of the picture – a distorted, elongated object that appears to hover between the men’s feet – can only be seen properly if you look up at the painting from the bottom right corner. Viewed from here, the shape reveals itself to be a large skull, an effect called anamorphosis which can also be seen in an unusual portrait of Henry’s son Edward VI in the National Portrait Gallery, London. Equally hidden at the top left of the picture, pinned to the green damask curtain, is a crucifix. It might hint at Christian unity because it expresses the universal hope of salvation through Christ’s sacrifice.

The Ambassadors
Hans Holbein the Younger 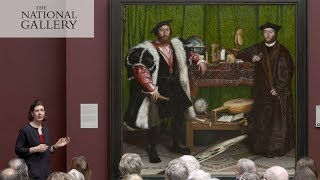 Who were the French ambassadors so elegantly depicted in Holbein's masterpiece and how did King Henry VIII's astronomer become involved? Find out all this and more with Susan Foister, our Deputy Director and Director of Public Engagement.