These paintings are examples of pendant portraits where two sitters are shown on separate canvases, but are intended to be hung as a pair next to each other on the wall. The pendant format was popular in 17th-century Holland and was often used to show either married couples or families. The two sitters are now known to be Jacob Trip and his wife Margaretha de Geer. Jacob was one of the wealthiest and most successful merchants in Northern Europe and he worked closely with Margaretha’s brother, who was one of the greatest iron merchants and arms manufacturers of the day. 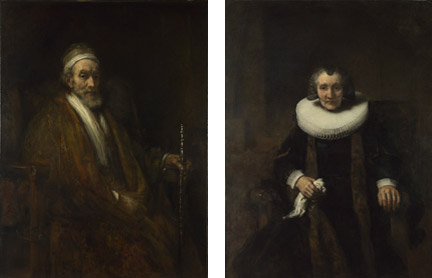 Rembrandt,'Portraits of Jacob Trip and his Wife Margaretha der Geer', about 1661, about 1661 © The National Gallery, London

Rembrandt’s favourite blue pigment was smalt. He used it in many areas of these paintings, which is quite surprising as nothing looks bright blue. This is partly because it is used together with other pigments in complicated mixtures and also because the blue smalt has degraded. Unfortunately, smalt often degrades so that the paint now appears darker and browner than it was originally. 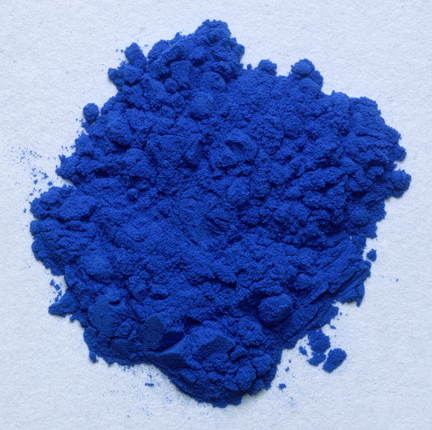 Smalt prepared as a pigment.

(a) What is smalt and why does it lose its colour?
Smalt is a blue glass, ground into a powder and used as a pigment. Under a microscope the pigment particles look like tiny shards of broken glass. The blue colour comes from cobalt ions in the glass linked to oxygen ions in a tetrahedral geometry. 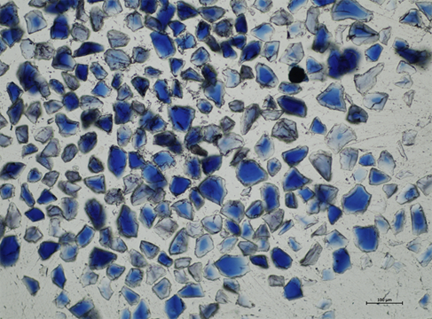 Smalt particles viewed under a microscope.

A paint cross-section from the portrait of Margaretha de Geer has been cut so that it is thin enough for light to pass through it. This makes it easier to see that some smalt particles in the paint are still blue, while others have become very pale.

A cross-section from the bottom edge of the painting.

Smalt contains potassium, which was added to lower the melting temperature when making the glass. Potassium stabilises the tetrahedral structure around the cobalt ions, but unfortunately it is leached out over time. As the potassium is lost from the smalt particles, the cobalt co-ordination changes from tetrahedral towards octahedral, leading to a loss of colour.

M = metal, L = ligand. The Co2+ ions present within the glass have a tetrahedral geometry and in this arrangement are responsible for the blue colour.  As potassium ions are leached from the smalt, the ligands surrounding the cobalt ions re-arrange, shifting towards an octahedral geometry. This leads to the loss of the blue colour.

(b) Additional consequences of smalt degradation
At the same time as the smalt particles lose their colour, the leached potassium reacts with fatty acids from the oil binder forming potassium soaps. The binder becomes more yellow, as is clear in the cross-section, and the result is that overall the paint appears brownish-grey.

The cobalt in smalt can also act on the oil as a catalyst, speeding up the drying of the paint. (See 'what is paint?')

Additional material:
Learn more about the degrading of smalt in the National Gallery