This portrait shows the sitter, Frederick Rihel, a wealthy paper merchant, posed on horseback. This positioning of a sitter is unusual for Rembrandt who preferred simple portrait compositions (as shown in the other portrait examples in this resource). It is possible that the sitter requested to be shown riding, as historical documents tell us he had a great love for horses. 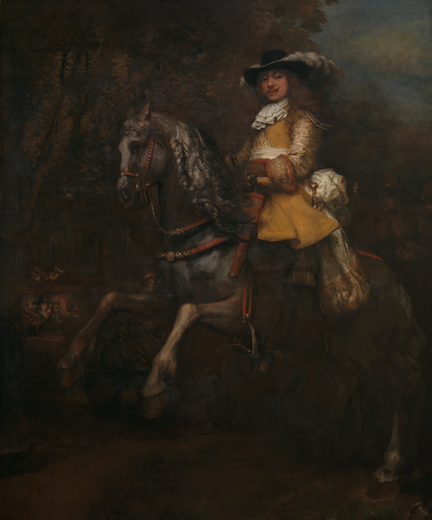 The technical imaging of paintings can help specialists understand how a painting was made. For this reason, X-ray images of pictures are produced routinely at the National Gallery, but sometimes the results can be surprising. This X-ray image reveals an entirely different composition beneath the portrait. 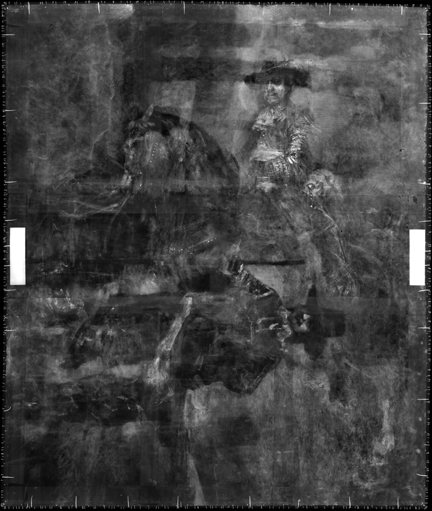 When the X-ray image is rotated anti-clockwise by 90°, a standing figure can be seen. Rembrandt painted this figure first, and then re-used the canvas for the second portrait – of Frederick Rihel. 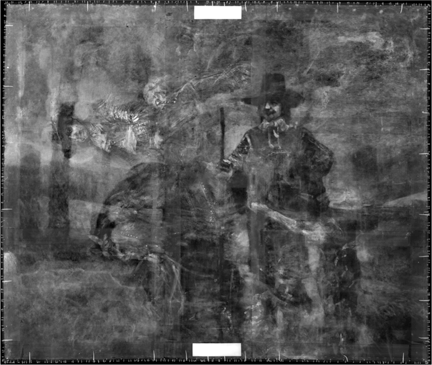 (a) Why do X-rays allow us to see this hidden image?
X-rays are a type of radiation, not visible to the naked eye, which can pass through most solid objects. There are certain materials, however, which can impede X-rays. Pigments that contain metal ions that have a high atomic number (Z), like lead white (basic lead carbonate) do this better than pigments containing chemical elements with low atomic numbers. When a painting is placed between an X-ray source and a photographic film sensitive to X-rays, any areas containing a large amount of such pigments will impede the X-rays and will appear white in the X-ray image.

The outline of the standing figure in this example is visible because pigments such as lead white were used in the paint of the surrounding area but were not used when painting his hat, hair or most of his clothes. Areas of the figure that do contain some of these pigments, and therefore appear white in the X-ray image, include his face, collar and the decorative bands of the sleeve. X-ray images are often difficult to interpret because they show all of the layers of the work superimposed on top of one another.

(b) Infrared – another way to see below the surface of a painting.
Infrared radiation, which has a much longer wavelength than X-rays or visible light, also provides a way of seeing below the surface of a painting. This radiation passes through paint until it reaches something that absorbs it, or until it is reflected back to a camera sensitive to infrared light. Certain pigments absorb some or all of the infrared radiation, while others are almost entirely transparent to these wavelengths. 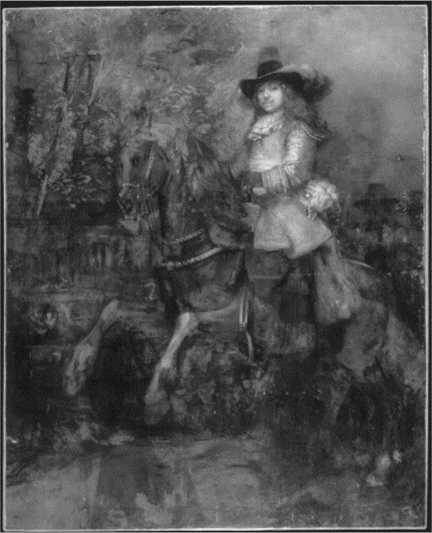 An infrared image of Rembrandt, ‘Portrait of Frederick Rihel on Horseback’, probably 1663.

The standing figure observed in the X-ray image of this painting is only just perceptible in the infrared image. Infrared images, like X-ray images, are often difficult to interpret because they show all of the layers of the work. The combination of pigments present in this area of the painting means that the figure looks rather ghost-like, with no solid outline. 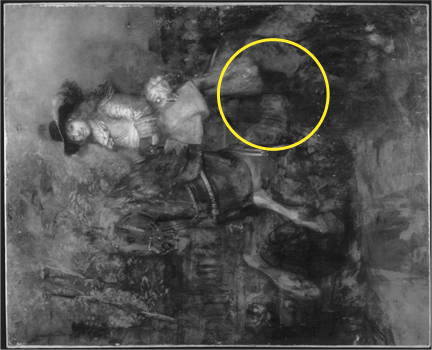 An infrared image of Rembrandt, ‘Portrait of Frederick Rihel on Horseback’, probably 1663, rotated anti-clockwise by 90.

This technique is more usually used to see underdrawing – the design that an artist draws, usually in black, before beginning to paint. Black pigments, based on carbon, absorb infrared radiation while the white-coloured ground layer reflects much of the infrared radiation back to the detector. In this example it is the paint from the two portraits, rather than an underdrawing, which dominates the infrared image.