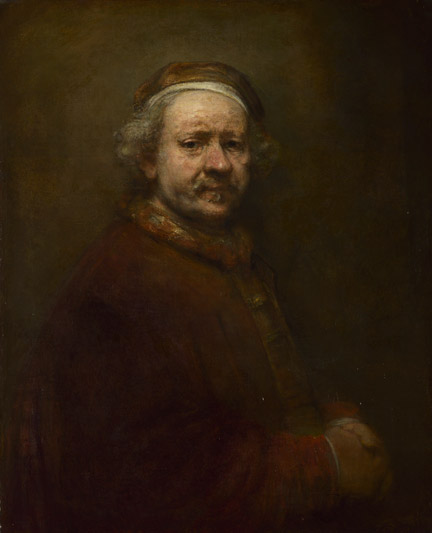 Paint has two basic elements: a pigment (coloured powder) and a binder (such as egg, oil or glue). Oil was the most common binder used in the 17th century. Oils consist of mixtures of triglyceride molecules. 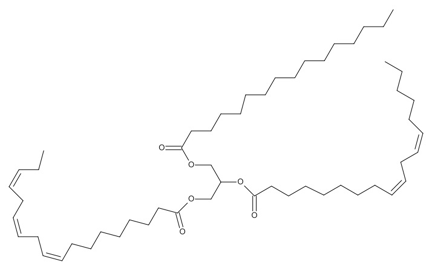 (a) How a paint film is formed
For an oil to ‘dry’, a significant proportion of the triglyceride molecules must have some degree of unsaturation (they must contain a number of double bonds). This allows the molecules to polymerise in air, cross-linking with one another to form a solid film. So when we talk about oil paint ‘drying’, we actually mean polymerising.

Only certain oils, known as ‘drying oils’ contain enough unsaturated triglyceride molecules to polymerise and form a film. The most widely used drying oils in Europe in the 17th century were obtained from flax seeds (linseed oil) or extracted from walnuts (walnut oil). 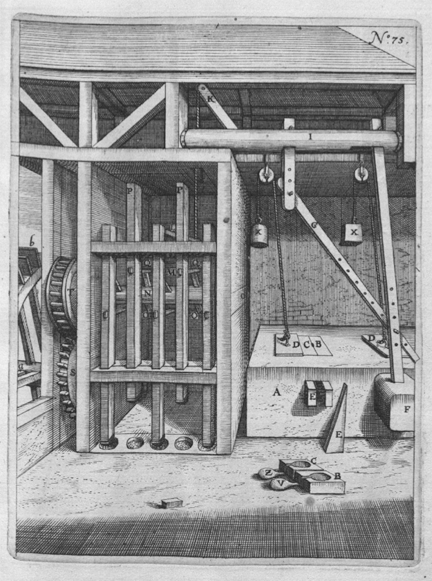 The flax seeds or walnuts are crushed by five iron-tipped pestles (P) on the left, then wrapped and placed in containers (B, C) in an oak chest (A). The wedges (E) on either side of the containers are forced together by the pressure of the wedge (F) driven against them by the action of a falling hammer. This provides sufficient pressure to obtain the oil.

(b) Modifying the oil
The polymerisation and cross-linking of the oil can be affected by a number of different factors. Sometimes these drying oils were thickened, either by heating them (heat-bodying) or by leaving them to stand for a period of time without heating. These processes produce more viscous oils, which hold their shape when drying and are less likely to wrinkle. From a chemical perspective, the characteristic feature of these thickened oils is that the polymerisation reactions have already begun.

The drying process can also be accelerated by the addition of a catalyst. This catalyst usually contains a metal ion capable of existing in more than one oxidation state, such as cobalt, manganese or lead. Many pigments contain these metal ions and sometimes they can act as catalysts, producing a paint that dries quickly. 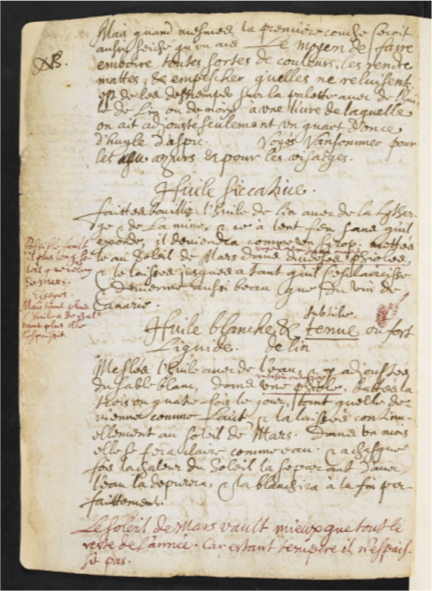 The recipe above is for the preparation of a drying oil (Huile siccative). It is written in French and an approximate translation reads, ‘Boil the linseed oil with litharge and some red lead on a slow fire without it bubbling over. It will become like a syrup.  Put it in the March [Spring] sun in different vials (open vessels) and leave until it clarifies and becomes as beautiful as Canary wine.’ Written in the margin, in red ink, he suggests that, ‘It is possible that you could leave it longer in the sun than that of March. Try this. But the more you expose the oil to heat, the more it will thicken’. The manuscript was compiled between 1620 and 1646 by Sir Théodore de Mayerne, a physician at the English Court, and contains amongst other information, recipes for the preparation of artists’ materials. He obtained these by talking to artists at the English Court and this recipe may have come from the painter Daniel Mytens.

(c) Creating and working with paint
To make paint, a pigment is added to oil and the two must then be ground together for some time so that everything is well mixed. To produce paint with just the right colour and consistency, the type of oil and pigment and the proportion in which they are mixed must be carefully chosen. An artist might want a paint with certain physical and optical properties in order to create different effects; perhaps a smooth, glossy red paint is required, or maybe a light-coloured but thick, opaque paint with which to produce a very textured surface. Looking closely at Rembrandt’s ‘Self Portrait at the Age of 63’, you can see the exact brushstrokes the artist used when creating thick areas of paint on the canvas, which art historians call impasto. Rembrandt was well known for producing paintings with areas of thick impasto paint. 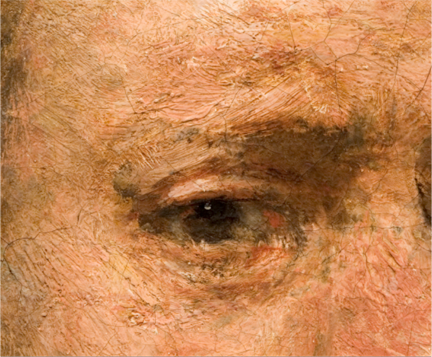 A detail showing the paint texture from Rembrandt, ‘Self Portrait at the age of 63’, 1669.

Additional material:
Learn about the materials used by Vermeer, another 17th-century Dutch artist