A man travelling from Jerusalem to Jericho was attacked by thieves who stole his clothes and left him for dead. A priest and a Levite saw the injured man but both passed him by. A Samaritan bound the man’s wounds, put him on his own mule, and carried him to an inn, where he left money for the man’s care. Christ told this story after being asked who should be loved as a neighbour. He said that the man who had shown mercy was the true neighbour and instructed his followers to go and do likewise.

Bassano has shown the moment when the Samaritan lifts the man on to his mule. The two dogs are licking up the wounded man’s blood. The priest and the Levite can be seen walking away in the distance.

Jacopo Bassano may have been the first Italian artist to represent the parable of the Good Samaritan (Luke 10: 30–7). He did so several times, and the subject became popular with other Venetian artists, including Veronese.

The parable of the Good Samaritan is told in the Gospel of Luke (10: 30–7). When asked ‘Who is my neighbour?’ – in other words, to whom should I be charitable? – Christ told this story. A man travelling from Jerusalem to Jericho was attacked by thieves who wounded him, stole his clothes and left him half dead. A priest and a Levite travelling by saw him but both ignored him. A Samaritan took pity on the man, ‘bound up his wounds, pouring in oil and wine, and set him on his own beast’ (Luke 10: 34). The Samaritan took the man to an inn and left money for the innkeeper to continue to care for him. Christ said that the Samaritan – the man who had shown mercy – was the injured man’s neighbour. Christ instructed his followers to go and do likewise.

Jacopo Bassano may have been the first Italian artist to represent the subject of the Good Samaritan. He did so several times and seems to have made it popular with other Venetian artists, including Veronese. Here, Bassano shows the moment after the Samaritan has bound the injured man’s wounds; he lifts him up on to his own mule. He has painted two dogs in the foreground licking up the man’s blood. The priest and the Levite can be seen walking away into the hilly landscape in the distance.

The painting would not originally have been so dark. The copper greens in the foliage, and perhaps also in the grass, have darkened making it difficult to see the mule against the trees and rocks behind it. And the stripes in the Samaritan’s scarf have also changed from green to brown. Bassano’s approach of painting large figures close to the front of the picture, in settings with limited spatial depth, is typical of his work during this period and can also be seen in another of his works in the Gallery’s collection, The Way to Calvary. However it is the hazy, atmospheric landscape that makes The Good Samaritan so impressive. Bassano captures the grainy quality of the air at first light. Beneath thick grey clouds, the pale light of dawn touches the foothills of the mountains and casts patches of light and dark on the distant fields and hills.

Jacopo Bassano painted several different compositions and versions of The Good Samaritan. His earliest example of this subject is in the Royal Collection at Hampton Court and dates from 1546–8. The same pewter flask appears in both paintings, and the bald bearded model used here for the Samaritan is used in the Royal Collection painting for the injured traveller.

The National Gallery’s painting was once owned by the artist Sir Joshua Reynolds who included it in an exhibition to benefit his servant Ralph. The charitable subject of this painting must have seemed very appropriate to the charitable purpose of Reynolds’s exhibition. 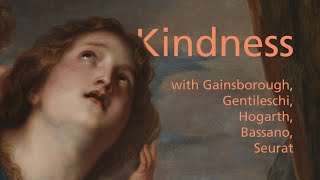 Christine Riding, the Jacob Rothschild Head of the Curatorial Department, looks at paintings on the theme of kindness.

The Way to Calvary
Jacopo Bassano
While carrying his cross, Christ stumbles and falls. One of Christ’s executioners raises a fist to strike him and another pulls him by a rope around his waist. In the distance is Calvary, the barren hill with two crosses where Christ will be crucified. The Virgin follows her son and wipes her tea...
Room 9
The Purification of the Temple
Jacopo Bassano and workshop
Christ arrives at the temple to find it full of money-changers and traders. Christ says, ‘My house shall be called a house of prayer, but you have made it a den of thieves. And the blind and the lame came to him in the temple; and he healed them’ (Matthew 21: 12–15).Jacopo Bassano has depicted bo...
Not on display
The Adoration of the Shepherds
Follower of Jacopo Bassano
The Virgin lifts the white cloth covering the manger to reveal the newborn Jesus. The shepherds fall to their knees in adoration. One respectfully takes off his hat while another holds down the trussed lamb he has brought. A goat, ox and ass also gaze in wonder, as the first glimmers of dawn appe...
Not on display
The Departure of Abraham
Workshop or imitator of Jacopo Bassano
God tells Abraham to leave Haran and go to Canaan. He obeys, travelling with his whole household and goods (Genesis 12:1).The towers and walls of Canaan are just visible in the distance as God appears to the elderly Abraham in a burst of golden light. The young man in the turban beside Abraham is...
Not on display