Find out more about The Royal Academy of Arts [external link]

A new wing and a dome

There was a lot of public criticism of the National Gallery's building and in 1869 the architect E.M. Barry was asked to submit designs for rebuilding the entire Gallery at Trafalgar Square.

After much discussion, it was decided that the existing building should remain, and a new wing should be added. This was completed in 1876, and added seven new exhibition rooms at the east end, including the impressive dome. 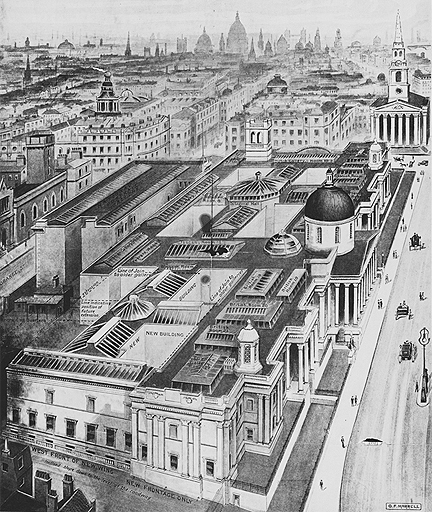 The Trustees had to battle for a long time to secure expansion space for the National Gallery. The site in central London was very constrained. Eventually, in 1907, barracks at the rear of the Gallery were cleared and work began to construct five new galleries.

Next: The Sainsbury Wing