Mosaics in the Portico

The first picture that greets visitors to the National Gallery is not an Old Master, nor an Impressionist. Nor does it even hang on a wall. Set into the floor of the first landing in the Gallery's Portico entrance is 'The Awakening of the Muses', a marble mosaic laid in 1933 by the Russian-born artist Boris Anrep (1885-1969).

Between 1928 and 1933, the National Gallery commissioned Anrep to lay two mosaic pavements in the vestibule of the Main Hall to illustrate 'The Labours of Life' and 'The Pleasures of Life'. In 1952, Anrep laid a third pavement, 'The Modern Virtues'.  The resulting mosaics are a celebration of everyday life, which lies underfoot in a busy public place.

Anrep was an associate of the Bloomsbury Group of artists and writers, who notoriously championed modern art and modern attitudes. His Muses are not heavenly immortals, but portraits of people from his own world. Many of the characters are played by Anrep's Bloomsbury friends.

Celebrated people of the day shown in the mosaics include: 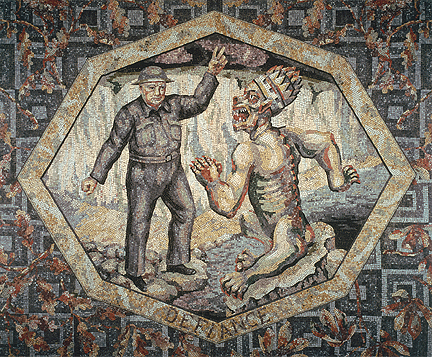 There are many more, including art critic Clive Bell as a rather sober Bacchus. Anrep and Bell had first worked together in 1912, selecting works for the art critic Roger Fry's second controversial Post-Impressionism exhibition.

Anrep was one of the foremost mosaicists in Britain. His work can also be seen at Tate Britain and in Westminster Cathedral.

Next: Sculptures on the building