Rubens’s landscapes present a different side of an artist who is best known for painting religious, mythological or classical subjects on commission. This room assembles a group of the artist’s landscapes, which he most probably painted for his own pleasure and that of a select group of friends. This meant that they remained largely hidden from view during Rubens’s lifetime. Soon after his death they became more widely known, and many eventually found their way to Britain, where they were greatly admired by artists such as Gainsborough and Constable. The former’s Watering Place and the latter’s Hay Wain (both in Room 34) are unthinkable without Rubens’s example.

Portraits form yet another aspect of Rubens’s output and they illustrate how the artist moved in the circles of European monarchs, noblemen, connoisseurs, and scholars. By contrast, Jacob Jordaens portrayed almost exclusively people from his native city of Antwerp. In both his portraits and his historical and allegorical paintings, Jordaens introduced a level of realism that is alien to the religious and mythological works of Rubens and Van Dyck.

Portrait of a Man
Flemish
An unidentified young man looks out at us with a direct gaze. Painted by an unknown artist, he is shown leaning against a stone archway covered with a swathe of white satin curtain. His expensive lace collar and cuffs are well displayed. His youth is emphasised by his sparse moustache and wisp of...
Room 20
The Holy Family and Saint John the Baptist
Jacob Jordaens
The infant Christ is the central figure in this painting, but he is the only one who doesn't look at us directly. Gripping his rosary (the Catholic prayer beads used to keep count of devotions), he gazes beyond the frame in contemplation, while Joseph, the Virgin Mary and the young John the Bapti...
Room 20
The Virgin and Child with Saint John and his Parents
Jacob Jordaens
We are watching an intimate family moment, apparently unnoticed. Two children are being introduced – they are the Christ Child and his cousin, Saint John the Baptist. Although this meeting is not mentioned in the Bible, it prefigures the Gospel moment when Christ comes to John to be baptised.The...
Room 20
Portrait of a Boy aged 11
Jacob van Oost the Elder
The serious young boy in this portrait turns away from us to gaze into the distance. The artist has signed the picture but he hasn’t named the sitter. Only his age, 11 years old, and the date, 1660, are given. The boy is pale, but the deep brown background, the warm shade and delicate texture of...
Room 20
Portrait of Dom Andreas Boulengier
Frans Pourbus the Elder
Although we know the name and approximate date of birth of the sitter of this portrait, he has not yet been fully identified. His robes suggest he was a Benedictine, or possibly Augustinian, canon. The coat of arms in the upper right corner – that of the Boulengé de la Hainière family – is the sa...
Room 20
Portrait of an Unknown Man, aged 56
Frans Pourbus the Younger
Room 20
A Landscape with a Shepherd and his Flock
Peter Paul Rubens
Rubens has created the impression of a wide-open space by depicting a point of interest in the right foreground – the shepherd watching over his sheep – then using the strong diagonal lines of the river, the road, the edges of the clouds and the raking light to trick our eye. Like the shepherd, w...
Room 20
A Shepherd with his Flock in a Woody Landscape
Peter Paul Rubens
We look down from a height on a rocky outcrop of ground surrounded by trees, their reflection caught in the tranquil stream drifting past. The woods are dark and dense but unthreatening. There’s a pathway through the undergrowth towards the light.A shepherd leans on his crook, his flock beside hi...
Room 20 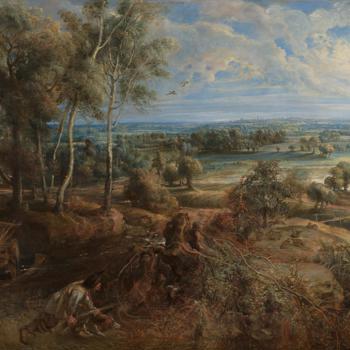 A View of Het Steen in the Early Morning
Peter Paul Rubens
On a crisp autumn morning, the rising sun casts a cool light on the manor house. Shadows are long and there’s a suggestion of dew on the grass of the meadows. The windows of the manor house and the stream meandering past it twinkle, and the few feathery clouds are tinged with gold. We are high up...
Room 20
A Wagon fording a Stream
Peter Paul Rubens
A lone driver steers his horses and wagon down a steep bank into what seems like a deep ford. It’s an idyllic scene evoking afternoon light filtering through woodland, and the subject is typical of Rubens’s burst of interest in landscape painting in the last five years of his life. Rather than pa...
Room 20
Portrait of Ludovicus Nonnius
Peter Paul Rubens
The aged antiquarian and doctor Ludovicus Nonnius meets our gaze with watery eyes. With his slightly parted lips, he appears to engage us in discussing a passage from the book he holds, which is most likely his recently published text, Diaeteticon sive de recibaria, Libri IV. In this he argues fo...
Room 20
Portrait of Susanna Lunden(?) ('Le Chapeau de Paille')
Peter Paul Rubens
This is almost certainly a portrait of Susanna Lunden (1599–1643), daughter of the Antwerp merchant Daniel Fourment, an old friend and client of Rubens. The portrait was probably made soon after her marriage to Arnold Lunden.It’s a highly distinctive painting – the sitter’s dark, oversized eyes a...
Room 20
The Watering Place
Peter Paul Rubens
A young milkmaid with a brass pitcher on her head and a bucket in her hand leads her herd of cattle away for milking. The rising sun reflects in a pool and reaches through the trees to catch the sleek white hides of some of the cows. It’s an idyllic, rustic scene, yet there is energy: people are...
Room 20
Portrait of the Archduke Albert
Studio of Peter Paul Rubens
Against a deep red background, the Archduke Albert of Austria turns towards us with a direct but gentle gaze. His left hand is on the pommel of his sword but his pose is relaxed and unintimidating. His right arm is turned towards us, showing off the delicate pattern of his sleeve and the lace ruf...
Room 20
Portrait of the Infanta Isabella
Studio of Peter Paul Rubens
Isabella Clara Eugenia, Archduchess of Austria, was the daughter of King Philip II of Spain. She is shown sumptuously dressed in black and gold, with a spectacularly large ruff and spiky lace cuffs. She looks out at us with a hint of a smile in her eyes and around her mouth.In 1599 Isabella marri...
Room 20