The double portrait sold in 1808 and 1810 was attributed to Quinten Massys. Between 1824 and 1900, NG1689 was invariably attributed to Massys. In 1901 it was catalogued as by Gossart;14 in the 1913 catalogue the idea was put forward that it might be by two different hands, one German and one Netherlandish.15 Though this theory was dropped after 1921, the portrait remained ‘ascribed’ to Gossart until 1945, when it was once more catalogued as by Gossart. The attribution has been accepted by Friedländer, who considered it ‘in many respects his masterpiece’,16 by Davies and by most other art historians.

Weisz dated the portrait in the 1500s, von der Osten towards 1513; Pauwels, Hoetink and Herzog placed it in the 1520s; Ainsworth between c.1515 and 1530.17 The dress of the couple may indicate that it was painted in the 1510s18 but, because they were old, they may not have kept up assiduously with current fashions. The style is close to that of the signed diptych of Jean Carondelet, dated 1517 (Louvre),19 and the Brussels donor portraits of about 1520; the attention to detail is less startling in the later portraits. The nudes in the man's hat-badge, whose poses derive from engravings by Dürer, are reminiscent of Gossart's ‘Neptune and Amphitrite’ (Berlin), dated 1516.20

Such half-length double portraits were known in the Low Countries in the fifteenth century and appear to have been relatively common in Germany.21 Two portraits by Quinten Massys, which may be cut from one double portrait, were painted at about the same time as NG1689 and show sitters who are similarly failing to communicate with each other.22 According to Smith, Gossart has brought the couple ‘the more together to show them the more apart. Eyes averted, ignoring each other, they choose not to communicate. Thickly clothed as if to defend their bodies one from the other, they make a pitiful contrast to the young lovers in the cameo on the man's hat. They, like an emblem of honest communication, “eye-beames twisted”, stare into each other's eyes, baring their souls as they have bared their bodies. Held by the girl, a horn of plenty promises unashamedly physical joys. The elderly couple, haggard and sour, seem, through their incompatibility, never to have experienced such happiness ...’23

Although the woman is behind the man and although, in reality, her head was probably smaller than his, in the portrait her face is only very slightly smaller. Because it is more strongly lit, because it is surrounded by a large area of white veiling and because it is more centrally placed on the horizontal axis of the composition (whereas the man's head is just contained within the top half), she occupies the dominating position. She appears to be the younger and stronger of the two. She has retained most of her teeth, whereas he has lost his; the whites of her eyes are greyish but his are pink; she is tidily dressed but he is casting white hairs onto his collar. Her hands are concealed but his are clenched, perhaps rather desperately, around his fur collar and his staff – contrasted with the staff casually held by the young god in the hat-badge. She makes a bolder pattern of simple shapes, while his contours, as well as his body, are crumpled. He is shrinking – literally, for his body is much too small in proportion to his head. Though the two may not be communicating, she appears to buttress his decaying and shrivelled form. 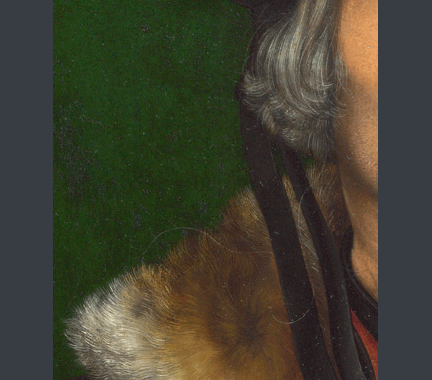 fig.21 Detail from NG1689, the man’s collar with stray white hairs curling over it
View enlargement in Image Viewer

The parchment support is unusual and may suggest that the portrait was meant to be easily transported.24 That could imply that it was painted not for the sitters themselves but rather for some distant friend or descendant. The two heads are rather differently treated. The woman's is carefully outlined in the underdrawing and there are very few alterations, though the detail, for example in the hairs on her upper lip, is equally exacting; whereas the man's head is more sketchily underdrawn and there are many more changes. He may have been painted after the woman. They may never have seen the finished painting, may never have been aware of Gossart’s merciless observation of their physical decrepitude or the pitiful contrast between the young gods on the hat-badge and the collapsing flesh of their own bodies. The white hairs which have fallen from the man's head and which curl over his collar are not just triumphs of illusionistic virtuosity but a dreadful commentary on mortality (see fig.21 above, and photomicrographs m14 and m16 in Image Viewer).