NG1689 was cleaned in 1942, when the backing canvas was partially strip-lined. The painting is in very good condition, though the man’s black doublet is a little worn and there is a small damage in the lower-right section of the woman’s veil. The yellow pins in her veil have been touched out by a restorer, for unexplained reasons. Some of the red lakes, for example in the shadows on the woman’s veil, may have faded slightly.

The support is one piece of parchment which has been laid down on a single piece of fine canvas (14 warp and weft threads per centimetre). The softwood stretcher does not bear any visible maker's mark. The parchment may have wrinkled when it was laid down: the damage in the lower-right corner could have occurred when a wrinkle was smoothed away. The parchment may originally have been laid down on a panel: holes in the edge of the parchment were possibly made when it was tacked or laced to a panel (fig.3). 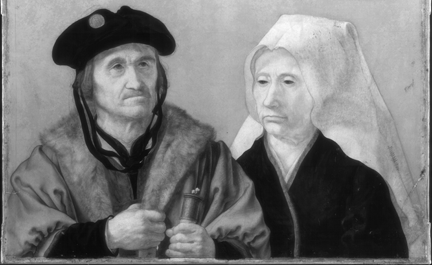 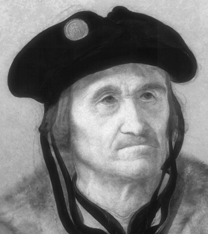 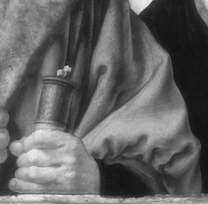 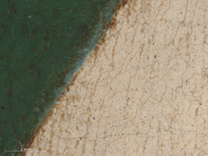 The parchment is covered in a thin priming layer of lead white. Infrared reflectography reveals underdrawing in a liquid medium, apparently applied with a brush (fig.4). The drawing consists of outlines and some hatching in the shadows of the man’s draperies (fig.3). There are many small changes. In the underdrawing, the man’s hat is larger and the hanging ribbons are further from his face on both sides of his head (fig.3). The contour of his face is drawn to our left of the painted contour; his neck, on our left, and the point of his nose are narrower in the drawing. His shoulders seem to have been drawn lower and the contour of his left upper-arm is drawn to our left of the painted contour. Fewer changes are visible in the woman, apart from slight alterations in some of the folds of her veil. As the black area of her dress is not penetrated by infrared radiation, it is impossible to tell whether there may be further changes there. Lines have been ruled to mark the limits of the composition at the top and bottom and on the left but not on the right. At the top and bottom, these lines are just inside the painted surface; on the left, the line is about one cm inside the painted surface and goes through the man’s sleeve (fig.2).

The green background (fig.5) is underpainted in azurite mixed with lead-tin yellow and some lead white; the translucent glaze is verdigris, partially dissolved in a medium of linseed oil, which contains some pine-resin. The medium of the woman’s veil is walnut oil.5 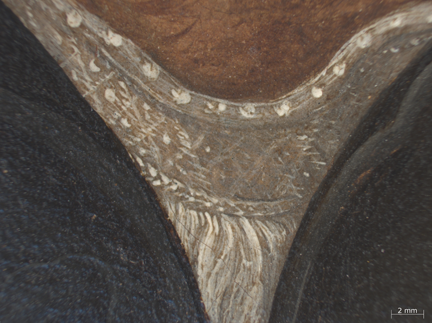 The paint has been applied with great skill and, in some areas, for example the man’s shirt (fig.6), at considerable speed. Some of the hairs of the eyebrows are rendered in ‘sgraffito’ (see fig.7 below, and photomicrographs m3 and m4 in Image Viewer); in many places the paint is worked wet-in-wet; in the fur it is feathered and in places the paint has been made to bead (see fig.8 below, and photomicrographs m17, m18 and m19 in Image Viewer); in the man’s fingernails it is dragged (see photomicrograph m10 in Image Viewer). The glaze on the man’s purple sleeves has been blotted with a cloth (fig.9): red fibres embedded in the glaze are probably from the woollen textiles from which the dyestuff in the red lake pigment was extracted. The green glaze has also been blotted (fig.10). 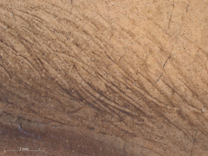 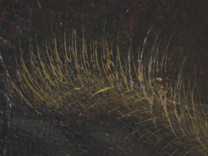 fig.8 Photomicrograph of NG1689 showing beading of paint in the fur of the man’s left cuff
View enlargement in Image Viewer 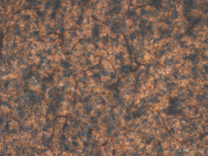 fig.9 Photomicrograph of NG1689 showing blotting of the paint of the man’s sleeve
View enlargement in Image Viewer 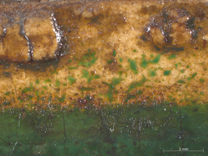 fig.10 Photomicrograph of NG1689 showing blotting of the green glaze of the background
View enlargement in Image Viewer 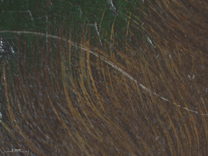 fig.12 Photomicrograph of NG1689 showing a stray hair in the fur of the man’s collar
View enlargement in Image Viewer 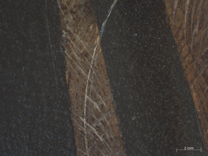 fig.11 Photomicrograph of NG1689 showing a stray hair caught among the ribbons of the man’s hat
View enlargement in Image Viewer

5. These observations are based on examination of paint samples from the green background. The binding medium was analysed by GC–MS and FTIR microscopy. See reports in the NG Scientific Department files by M. Spring (July 1994) and R. White and J. Pilc (January 1995).