NG2163 was offered and acquired as a work of the ‘Flemish School’ and published by Holroyd as a work of the ‘Antwerp School’. He mentioned that connections with Gossart’s work had been noticed;9 while Kronig ascribed it to Jan van Scorel.10 It was attributed to Gossart by Brockwell in 1909, who thought that it was a portrait of a young woman as the Magdalen.11 According to Weisz, Friedländer claimed that it was a certain work by Gossart;12  between 1912 and 1929 it was catalogued as by Gossart; and Friedländer published it as painted by Gossart in about 1515.13 Davies, however, thought that it was ‘perhaps … the youthful work of a pupil of Gossart’.14 Ainsworth maintained that it was by Gossart himself and painted in about 1506–8;15 she suggested that it might represent ‘a young woman in the guise of Mary Magdalen’. 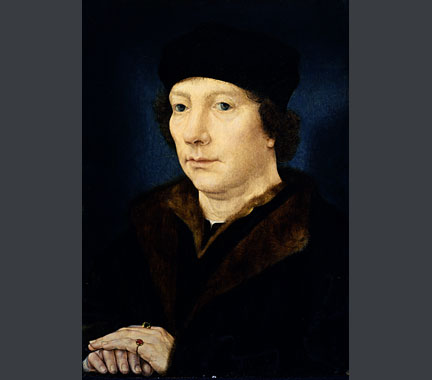 As the flesh and hair are in poor condition, the picture should be judged on the drapery, jewellery and ointment pot, all of which are very well preserved. Ainsworth, calling NG2163 ‘this little gem of a painting’, compared it with the portrait of Jean Carondelet now in Toledo, Ohio (fig.17). This portrait is usually attributed to Gossart himself and dated 1514 because a copy (Besançon) bears an inscription identifying the sitter as Carondelet (1469–1545) and giving his age as 45 and the date as 1514. Ainsworth, however, dated the Toledo portrait around 1503–8 because she thought that Carondelet looked more than three years younger than he appeared in Gossart’s diptych of 1517 where he is shown with the ‘Virgin and Child’ (Louvre).16 The over-cleaned state of the Toledo portrait makes the apparent age of the sitter exceptionally difficult to judge, but there seems no compelling reason to doubt the authority of the copyist’s date of 1514. Carondelet could well be 45 in the Toledo portrait; he is 48 in the Louvre diptych. If the Toledo portrait was painted in 1514, it would be approximately contemporary with Gossart’s ‘Adoration of the Kings’, NG2790.

It is difficult to believe that NG2163 is by the painter of the ‘Adoration’, that it is a portrait or that the artist had a model in front of him when he painted the image. The nose and the far eye are seen in false perspective from completely different angles: the nose is almost in profile but the eyes and the rest of the face are in pure three-quarters view. In the Toledo portrait, in contrast, the features are observed from much the same angle, in a straightforward three-quarters pose. Carondelet’s cranium is much diminished, whereas the Magdalen’s is rather exaggerated. Her large ear is set very high, while Carondelet’s ear is very low in the Toledo portrait, though it is accurately placed in the Louvre diptych. 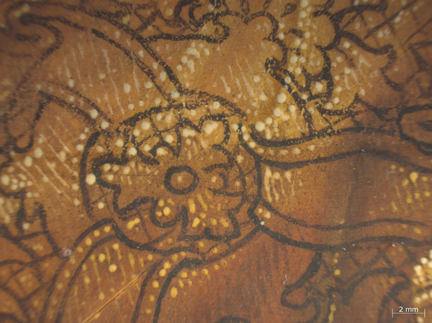 fig.8 Photomicrograph of NG2163 showing the cloth-of-gold of the dress
View enlargement in Image Viewer

The cloth of gold of the Magdalen’s robe (fig.8) is carefully painted but, if it is compared with the robes of Balthasar and Melchior in the ‘Adoration of the Kings’, it is singularly lacking in verve and skill. Similarly the Magdalen’s jewels and pearls and her elaborately decorated pot are accurately observed but are very much less interesting than the jewels, pearls and metalwork of the ‘Adoration’, where the pearls on Melchior’s clothes are painted with wonderful skill and economy of effort. The Magdalen’s hands, slightly unequal in size, are rather poorly articulated and the tangent contours, for example in the large jewel with the pendant pearl, are not normally found in Gossart’s work. The strange mythological subjects on the Magdalen’s pot have no parallel in metalwork designed by Gossart, where apparently irrelevant subject matter would be extremely unusual.

Though the abrasion makes it difficult to distinguish the true style of the head, the heart-shaped face, wide-open eyes, large irises and bowed upper lip are close to some of Gossart’s ideal types. The lock of hair brought forward in front of the ear is found in various Virgins by Gossart,17 as well as in his mythological figures such as Deianira and Danaë.18 The strong contrasts of light and shade in the hands, which are less damaged than the face, are again reminiscent of Gossart but the hands are so badly drawn that they cannot be by Gossart himself. NG2163 may be attributed to a follower. It was perhaps painted during his lifetime or shortly after his death: arch-topped panels and integral frames do not seem to have been fashionable after the middle of the sixteenth century. The arcane mythological subjects on the pot, however, would be rather exceptional in the first decades of the century.