The painting was cleaned and varnished in 1908, soon after its acquisition. 'The halo only came to light when the picture was cleaned.’3 Painting and frame were cleaned and restored in 2008–10. Parts of the hair, flesh and fur had been damaged by abrasion during previous cleanings. The flesh is very worn; the lock of hair falling in front of the Magdalen’s left ear was almost entirely lost and has been reconstructed from the remnants of original highlights and shadows. 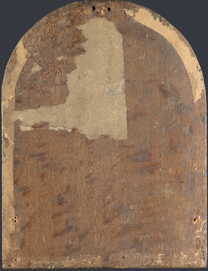 The frame, which is 22 mm thick, and the panel are made from one board of oak (fig.1), vertical in grain and radially cut. No dendrochronological investigation was or is possible, because the end-grain is covered by paint. A large number of narrow wooden dowels, set at intervals into the outer sides of the frame, may have been used to attach it to a second frame or another support (fig.2). Three holes are bored into the top edge of the frame, two of which emerge at the back of the panel (fig.3); a string or thong could have been passed through the holes and used to hang the painting. The frame had been gilded five times; beneath the gilding and overpaint was discovered a layer of grey-brown paint, varying in colour and including lead white, some coarse black, some vermilion and occasionally a little pale green.4 It lies on a lead-white layer covering a ground that is almost certainly chalk. This preparation continues across the whole panel including the painted surface.5 The grey-brown layer is likely to be original and may be intended to represent stone or marble. During the recent restoration, the frame was not regilded but a painted finish was applied to suggest a dark greyish stone surface – possibly in keeping with the original decoration of the frame. Infrared photographs and reflectograms reveal a few lines of underdrawing and several changes made during the course of painting, particularly in the hands. The stem on the lid of the pot ends in a knob that appears to be painted on top of the patterned fabric of the sleeve; the contour of the sleeve has been extended across the background; the larger of the two pendants and its ribbon are painted on top of the Magdalen’s clothes, though there seems to be underdrawing for something similar in a slightly different place. The blue background is painted with azurite.6 Although several samples were taken during cleaning from the frame and one from the blue background, no sample was taken for medium analysis. 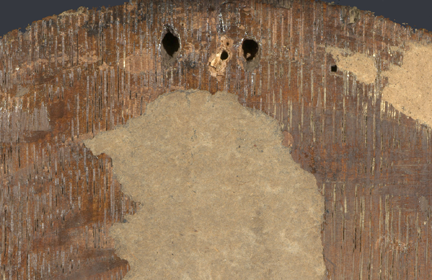 fig.3 Detail from fig.1, holes probably for a cord to hang the picture
View enlargement in Image Viewer

4. The layer structure of the ground, priming, paint and gilding campaigns on the frame were deduced from a series of paint cross-sections taken during the recent conservation of the panel (report in Scientific Department file by M. Spring dated 22 July 2009).

5. One paint sample was taken from this painting, from the blue background, and showed a lead-white layer similar to that seen under the paint on the frame (report in Scientific Department file by M. Spring dated 22 July 2009).