Venus and Cupid are shown against a lavish and beautiful landscape background. On the left is a forest with a stag and a hind. On the right is a distant landscape with a castle on a high crag overlooking water, in which other buildings are reflected. Between Venus and Cupid is an apple tree hung with fruit. Cupid holds a honeycomb and bees, which appear to have flown out of a large hole in the base of the tree trunk, crawl over him. Venus holds a branch of the tree with her left hand, and raises her left foot over a lower branch. She is naked except for her two necklaces, a thick golden chain and a bejewelled choker, and a large hat, a confection of coloured ostrich plumes on red velvet worn over a cloth of gold cap which conceals her hair. A Latin inscription is placed top right, directly over the blue of the sky (fig. 6). This is the most elaborate of a number of versions of this subject painted by Cranach and his workshop (see Versions). No two are exactly alike, but the inscription here is generally to be found in the same form in all.

The inscription and the origins of the subject

The subject is based on lines from Idyll XIX, ‘The Honeycomb Stealer’, attributed to the third-century-BC Greek poet Theocritus.21 The poem tells how Cupid complained to Venus of being stung on his fingers by bees after he had stolen a honeycomb. He blew on his hand, stamped and danced about, asking how such a small creature could give him such a large wound. Venus, laughing, told him that the effect was very similar to the wounds that he himself, also a small creature, imparted (in other words, the pains of love experienced by those who had been pierced by Cupid’s arrows). The work of Theocritus was published in the original Greek by Aldus Manutius in Venice in 1495/6; this edition may well have been acquired by Cranach’s employers, the electors of Saxony, who sought to acquire works from the Aldine press.22 A very similar treatment of the theme also occurs in another ancient Greek poem by Anacreon, Ode 35 (Carmina xl).

Theocritus’s poem was the subject of interest among humanists in Wittenberg, the principal seat of the Electors of Saxony. A number of them, including Philipp Melanchthon, Professor of Greek at the University of Wittenberg, the Hungarian humanist Caspar Ursinus Velius, Eoban Hess of Erfurt, Joachim Camerarius the Elder, Jakob Moltzer and Johann Stigel, made Latin translations of the text. The Latin translation of Theocritus by Velius was published in Basel in 1522 in Fünf Bücher Gedichte. Five versions of Idyll XIX by Melanchthon and his fellow humanists were published in Joannes Soter, Epigrammata Graeca veterum, in Cologne in 1528.23 Hess published a further four versions in an edition of Theocritus produced at Hagenau in 1530.24 Melanchthon, who lectured on Theocritus at the university, may well have initiated these translations, and Bauch was the first to suggestthat Cranach’s knowledge of the subject might have derived from him.25 The version of the idyll by Melanchthon published in 1528 is not similar to Cranach’s text; however, an epigram by him based on Theocritus published in 1540 is closer to the second two lines of Cranach’s text: ‘Pungit Apis puerum Veneris dum dulcia mella/ Furatur: sic sunt dulcia mixta malis’.26

An epigram by Georg Sabinus (1508–1560), which is identical to the lines in the painting, was evidently the source of Cranach’s inscription: it was first published in 1536 at Wittenberg by Georg Rhau, in an edition of his Enchiridion Utriusque Musicae Practicae, and again in 1538 along with a woodcut illustrating the subject.27 The epigram was also included in Sabinus’s Poemata published in Leipzig in 1544.28 Sabinus was a youthful member of Melanchthon’s circle who became his son-in-law: he arrived at the University of Wittenberg in 1523 or 1524, lodged in Melanchthon’s house and married his daughter in 1536.29  He would have been nineteen in 1527, the year the first dated version of Cranach’s painting was produced (see Versions, above and Date, below). Sabinus’s epigram is accompanied in the 1538 publication by a two-line variant of the Theocritus subject by Melanchthon, which is identical, but for one word, with Melanchthon’s epigram published in 1540 referred to above.30 Woodcuts (neither attributable to Cranach) which accompany both epigrams show, in relation to the Melanchthon text, a winged Venus holding from a blindfolded Cupid a heart which has been pierced by an arrow; and in relation to the Sabinus text, a Cupid-like infant Christ holding the instruments of the Passion (fig. 7).31  Perez d’Ors has drawn attention to a letter of 2 June 1526 in which Melanchthon signalled his interest in making versions of poems by Theocritus. As he has argued, it is highly probable that it was Melanchthon himself who was responsible for initiating not only the several textual variants of the subject which he, his son-in-law and their humanist colleagues at the University of Wittenberg produced in the 1520s, but also Cranach’s visual response to the subject in paintings which incorporated the Sabinus text. Both paintings and poems are likely to have been first produced at the same period (see Date below).32  Evidence survives that the Wittenberg humanist circle around Melanchthon knew of Cranach’s composition: Eoban Hess, the Erfurt humanist, a correspondent of Luther’s and also a member of Melanchthon’s circle, wrote at an unknown date in his copy of Velius’s 1522 translation of Theocritus against the relevant idyll: ‘Tabella Luce’ (‘the painting by Lucas [Cranach]’).33 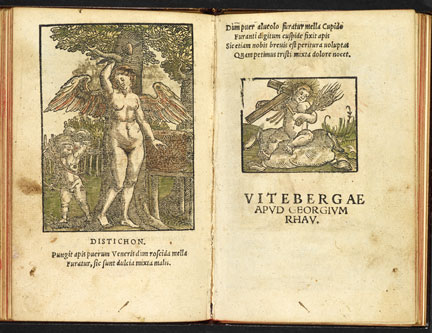 Cranach had few, if any, visual precedents to rely on for his own development of a pictorial response to the subject of the Theocritus idyll. Dürer depicted the subject in a watercolour now at Vienna of 1514 and in a slightly later woodcut (dated to around 1526 by Dodgson), but Cranach’s version of the subject owes nothing to these. Dürer’s Venus is in both cases clad in a flowing robe, and in the 1514 drawing bees pour out of beehives; in the woodcut they emerge from a hole in a post.34  Alciati’s Emblemata of 1531 includes two Latin epigrams based on the theme of Cupid the honey thief and has woodcut illustrations, but the book was published after the first dated versions of Cranach’s subject.35 Holbein alluded to the subject in a small roundel sketch for a medallion or badge, showing Cupid and the beehive; the drawing appears to date from between 1532 and 1543.36

Cranach’s response to the Latin lines inspired by Theocritus is distinguished by its upright format, unlike Dürer’s compositions, and by the near nudity of the goddess.37 Both features follow closely Cranach’s early representation of Venus in the woodcut of 1509 and in the painting at St Petersburg of the same date. The pose of Venus’s arm in the National Gallery work refers to the woodcut of Adam and Eve from 1509 (fig. 8). The elegant bend of her left leg may have been inspired by the intersecting bent leg of Adam in the woodcut, the boundaries between the two figures removed. The tantalizing manner in which she grasps the branch loaded with ripe fruit is perhaps a deliberate and purposeful reference to the temptress Eve.38  The pleasures of the painting are to be found in combined enjoyment of the amusing subject matter and the moral of the verses, in the elegance of the nude with her sweepingly decorative hat, in the beauty of the beasts lurking in the darkness of the forest and in the contrast of the precisely described distant vistas, themselves reflected in the lake. The way in which Cranach interprets the subject here, making Venus turn to the viewer, sharing the moral, with her left eye exactly in the centre of the composition, brings text and image together with witty precision. Cranach’s visual response to the texts produced in Melanchthon’s humanist circle is suitably inventive and distinctive.39 As the 1538 publication of the painting’s text suggests, it may, however, have been intended to convey a more profound, less secular meaning in the context of the Lutheran circles in which Cranach moved, in which Christ’s sacrifice was understood to have liberated man from the selfish suffering represented by Cupid (fig. 7).40 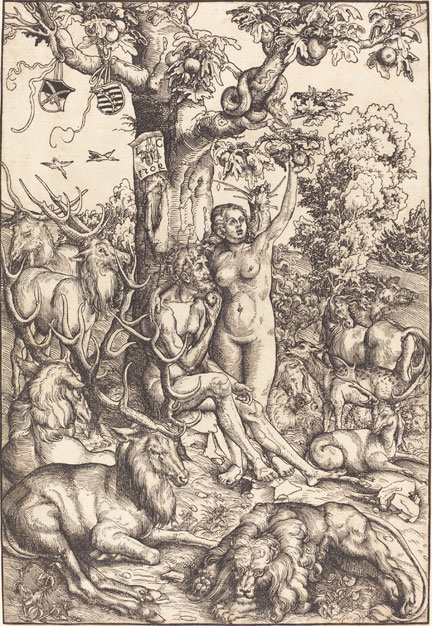 23. See Hutton 1941, p. 1040, Bath 1989, esp. pp. 65–70, and Ruiz Sanchez and Castro de Castro 2000, esp. pp. 147–9, all of which demonstrate the closeness of versions of Theocritus by Melanchthon, Hesse, Camerarius, Moltzer and Stigel, who would have known each other and may have circulated versions of the text to each other; I am grateful to Jean-Michel Massing and Pablo Perez d’Ors for these references.

27. Perez d’Ors 2007. The book was first published in 1518. An edition without the woodcut but with the poem appeared in 1536. Leeman 1984 argued that Cranach was inspired by a poem by Ercole Strozzi (Strozii Poetae pater et filius at Paris in 1530, f.92r), a claim refuted by Bath 1989, p. 67; Leeman’s argument is overly dependent on the version of the subject by Cranach at Otterlo. The first two lines of the Strozzi text reads: ‘Dum Veneris puer alveolus furator Hymetti/ Furanti digitum cuspide fixit apis’; the remaining lines are completely different to those of Cranach’s paintings. See Perez d’Ors 2007, pp. 87–8, for the history of the discovery of the source for Cranach’s text.

30. ‘Pungit apis puerum Veneris dum rosida mella/ Furatur, sic sunt dulcia mixta malis.’ The difference lies in the use of the word ‘rosida’ instead of ‘mella’.

32. Ibid., p. 89. Koepplin 2003 proposed that both Melanchthon and Georg Spalatin were involved in suggesting the subject to Cranach.

37. The dimensions of NG 6344 accord with the standard medium-sized panel that Cranach used, size D identified by Heydenreich 2007, p. 43.

39. See the discussion in Poulsen 2003 on the relationship between choice and the glance in a Lutheran context.

40. Ibid., pp. 93–4, also draws attention to the way in which the stag might be understood as a symbol of virtue defeating vice.