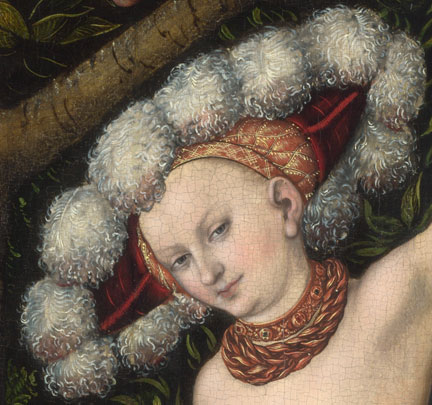 This painting has been compared to others by Cranach of outstanding quality which can be dated to the mid-1520s.41 It is distinguished not only by the inventiveness and wit of the composition, but also by passages of painting of great beauty: the landscape with its crystalline reflections in the mountain lake, the ostrich feather-trimmed hat worn by Venus and the deer in the background (figs 9 and 10). The finely detailed depiction of such areas contrasts with the bolder, more stylised but vigorous rendering of the foliage, which acts as a foil to the figure of the goddess. It is one of numerous versions of the theme by Cranach and his workshop, which vary greatly in size and quality: many are almost half the size of this painting, some much larger, and some have dark backgrounds rather than landscape settings (see Versions). NG6344 is distinct in several ways. It uses a larger format (but not the life-size format first seen in the version in the Galleria Borghese, Rome, which has a dark background and is dated 1531). Only the painting at Schwerin, with a date that can be read as 1527, is close in size to this one.42 Here the Latin verses appear on the upper right and are inscribed directly over the background rather than on the white rectangle found in other versions: none of these bears their verses on the right-hand side except the Rome painting of 1531 (which, like the other very large-scale versions, has a narrow format) and the Nuremberg picture, later in date; these, however, present the verses on a tablet, unlike the National Gallery picture. It is also distinctive in including a deer and a stag on the left-hand side: of other versions; the Schwerin painting includes a deer family on the right, while some others include a stag on the right. The stag may be derived from drawings used in Cranach’s workshop, but no specific source in a drawing can be identified and none is dated.43 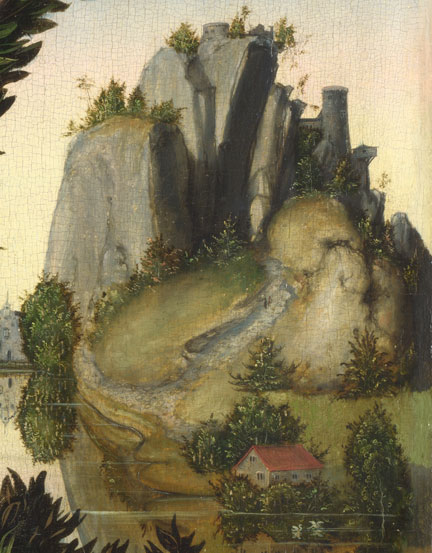 NG6344 was dated to around 1530 on acquisition by the National Gallery in 1963, but Koepplin and Falk suggested that it could be dated to as early as 1526, by comparison with the dated painting of Adam and Eve of that year (Courtauld Institute); not only do both paintings include apple trees and deer, but Eve raises her arm in a very similar manner to Venus.44 Koepplin and Falk also compared the National Gallery work to a painting of wild people (now Getty Museum), which they suggested might be a pendant to the Apollo and Diana in the Royal Collection, also dateable on stylistic grounds to the mid-1520s; again, there are similarities in the treatment of the landscape. The rocky crag, the buildings reflected in water, the thick curtain of leaves and the stag’s head are all closely comparable to NG6344; it is possible that these paintings were conceived and painted during the same period.45 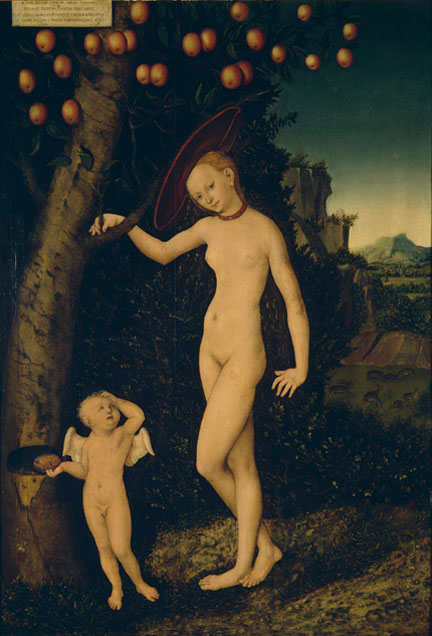 The composition of NG6344 is close to the earliest dated versions of the subject. The picture in Schwerin of 1527 (fig. 2) is similar in size and general composition, but differs in that Cupid is shown more frontally and the mountain is shown to the left. The painting dated 1530 at Copenhagen (fig. 3), which is of very high quality and in very good condition, is also similar to the National Gallery work, though Venus does not wear a broad-brimmed hat. NG6344 is closely comparable stylistically to the 1526 Adam and Eve. The one distinctive feature which is not followed in other versions – the absence of a white background for the inscription, which must have made other versions more legible – argues strongly that it may have been Cranach’s earliest response to the attractive subject provided by the Lutheran humanist circle at Wittenberg. It probably dates from about 1526–7, as Koepplin and Falk first suggested. The number of extant versions suggests that it proved to be a highly commercial subject for Cranach and his workshop. 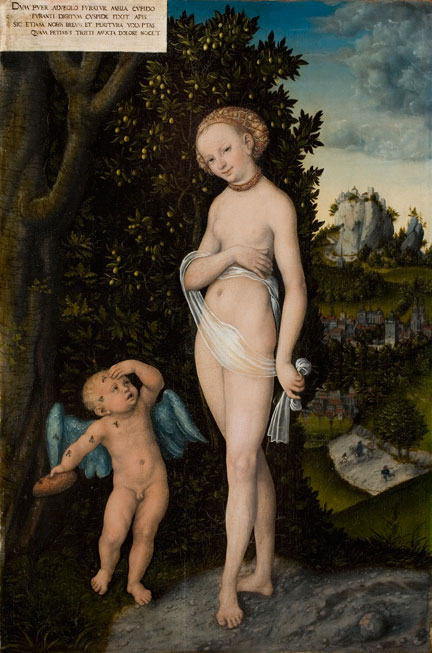 42. Koepplin thought the painting a copy: Koepplin and Falk 1974–6, vol. II, no. 570, p. 656. There are a few remains which may suggest the former presence of a ‘7’, later repainted date ‘1527’ slightly lower; I am grateful to Gunnar Heydenreich for this observation.

43. A drawing by Cranach of a stag in the Getty Museum (84.GC.36), dated to about 1530–4, differs from the representation of the stag in NG 6344 in that it is in reverse (though workshop drawings might easily be reversed) and also in that the stag looks straight ahead, rather than lifting its head as in NG6344.

45. Foister 2007, pp. 59–60, with the suggestion that the works might have been made in celebration of the marriage of the future Elector of Saxony, Johann Friedrich to Sibylla of Cleves in 1527. See also the entry for NG 3922.