The painting was transferred to Masonite board in June 1962 by Thorp Brothers of New York.19 It was cleaned and restored in July 1963.

The paint is in good condition: there are some losses of paint in vertical lines extending inwards from the top and bottom edges, and slightly broader areas of damage around Venus’s right ankle and in patches along a vertical line above this, behind her body, across her left arm and above her hat.

The current support is Masonite, which has been veneered and cradled to look like an old panel. The pattern of paint loss visible in a photograph taken after cleaning but before restoration in 1963 suggests that the original support was a panel with vertical grain, and with a vertical join just to the right of Venus’s body, extending through her raised arm and her leg; there was also a split or join to the left of Venus’s head, in the tree.

The ground is calcium carbonate (chalk) bound with animal glue. A fine canvas is present beneath the ground but this has been identified as cotton and was presumably added as part of the transfer process.20 Paint samples taken in 1963 showed that there is a lead white priming on top of the ground. Nothing that could definitely be identified as black underdrawing could be found with infrared reflectography. Examination of the surface with a microscope, however, revealed lines of red pigment below the uppermost layers of paint. These red lines appear to be performing the role of underdrawing and must lie over the priming. It has not been possible to identify the red material used, but it appears to be in a liquid medium. The lines can only be seen where the paint over them is pale in colour and thinly applied. They have been found in the hat, along several contours of the figures and in the landscape (see figs 4 and 5). 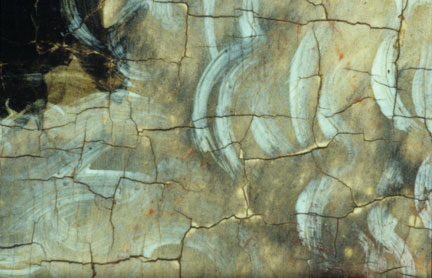 fig. 4 Detail from NG6344 showing traces of red pigment on the hat
Enlarge and zoom in 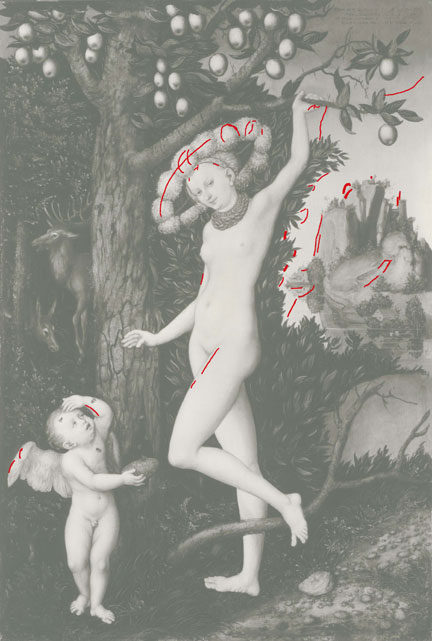 Linseed oil was identified by GC analysis of three samples: mid-blue paint from the sky, green from a leaf on the tree and creamy white paint from the clouds. There was no indication of heat-prepolymerisation of the medium.

The blue sky is painted in two layers of azurite mixed with a little lead white, the blue pigment being more finely ground in the lower layer. Cross-sections show that in some places the leaves of the apple tree have a black underpaint; they are modelled with an opaque yellow-green paint consisting of lead-tin yellow and verdigris in the lighter areas, and a darker green of verdigris alone in the shadows. The apples are painted with a mixture of lead white with some red lake and vermilion, glazed with red lake in the rosiest parts; the yellow highlights are of lead-tin yellow. The apples have reserves but many of the leaves are painted over the sky. A cross-section of paint from an apple showed a very thin scattering of carbon black particles over the lead white priming and under the layer of pink: on the painting, under magnification, this can be seen to be a very thin black underpainting, as though a very little paint has been dragged over the surface. There are numerous small pentimenti with the black underpainting for leaves or parts of leaves being painted out with blue sky paint. Similar thin layers of black are present under the small mountain and the grass in the middle distance.

19. Letter from Abris Silberman to Michael Levey, dated 24 May 1963, in Conservation dossier.