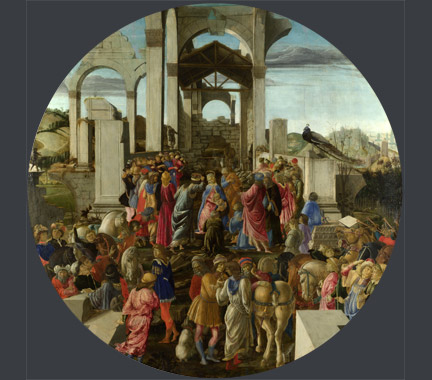 This large tondo of the Adoration of the Kings was painted by Botticelli, who depicted the subject five times, most notably in two large rectangular panels, one in the Uffizi (1475) and another in the National Gallery, Washington (about 1478). Because of the tondo format Botticelli rejected the more traditional conception of the scene (adopted, for example, in the Adoration of the Kings by Botticelli and Filippino Lippi in the National Gallery, painted about 1470), in which the Kings are depicted processing from left to right across the painting to Mary and the Christ Child, in favour of a composition focused upon Mary surrounded by a semicircle of the adoring faithful.1 Underpinning the complex new composition are a multitude of incised lines (which can be seen in raking light) and a perspectival grid, traces of which are faintly visible under magnification. Botticelli experimented with and changed many of the architectural details of this painting while working on it.

The monumental building that fills almost two thirds of the panel resembles a ruined basilica, a building type that originated with the state meeting halls of Ancient Rome, and was later employed for the larger early Christian churches, including old St Peter's in Rome (about 360). A large central nave extends deep into the picture, its massive arches supported by a series of tall rectangular piers. On the left-hand side, a screen of arches is all that remains of what may have been the arm of a transept, now reduced to a fragment. Upon closer inspection, a series of drawn arches under the paint surface can be seen to the right of the nave, mirroring those on the left. This reveals that Botticelli originally conceived his building with two symmetrical ‘transepts’ but later decided to extend it just to one side, almost certainly in order to allow him to include a view of Jerusalem in the background.2

The architecture continues in an increasingly ruinous state into the foreground of the work. In the middle ground low walls and the stumps of piers create an enclosure around Mary. The capitals are described with particular precision. They are designed like a section of cornice with a clear division into five bands of ornament. These capitals appear to be entirely Botticelli’s invention; given their difference from capitals used in 15th-century architecture they are presumably intended to impart a sense of the building's antiquity. The another element in Botticelli’s architectural ‘mise en scène’ is the stable, consisting of a tiled roof wedged into the nave and three walls of hefty stone blocks. It is unclear, however, whether these walls are to be understood as remains of the ruined basilica, or debris rearranged by the builders of the stable to form an inner precinct.

The effects of time

The structure as a whole is not just ruined but is also in the midst of further collapse, providing a potent architectural counterpoint to the relative serenity of the key figures below. Almost immediately above Mary, for example, a keystone slips precariously from an arch, looking as if it and the arch may crumble at any moment. Botticelli’s less than serene wreck of a building thus contains within it not just a potent sense of the effects of time’s passage, but also a sense that time is still passing. The ruinous state of this building and the wooden roof perched in the nave have a specific symbolic message, which alludes to the idea that with Christ’s birth the Christian church rose out of the ruins of the old pagan religion. More precisely, 'The Golden Legend' reported that when the Temple of Peace in Rome was built, the Oracle of Apollo foretold that it would stand only until a virgin gave birth to a child – a prophecy that came to pass when it collapsed on the night of Jesus’ birth. This story explains the presence of decaying Roman buildings in many 15th-century depictions of the Adoration. Although Botticelli does not allude to any one specific Ancient Roman building still extant, he gives here a sense of the sheer scale and heft of Ancient Roman buildings, perhaps particularly inspired by an awareness of the lofty ruins of the Basilica of Maxentius (believed to be the Temple of Peace by various Renaissance writers) and the Baths of Caracalla.

One final important element of Botticelli’s building is its ecclesiastical character, evoked by its resemblance to the basilica churches of early Christianity. The position of Mary within this church is particularly significant. She is in the very middle of the nave, a placement that renders her like an altar. By putting Mary here, Botticelli may well have been referring to the long tradition associating the procession of the Kings before Mary and Jesus at the Adoration with the procession of worshippers before the altar at Mass, a theme to which he returned in numerous Adorations.3

To cite this essay we suggest using
Alasdair Flint, ‘Sandro Botticelli, The Adoration of the Kings’ published online 2014, in 'Building the Picture: Architecture in Italian Renaissance Painting', The National Gallery, London, http://www.nationalgallery.org.uk/research/research-resources/exhibition-catalogues/building-the-picture/architectural-time/botticelli-adoration-of-the-kings