Sandro Botticelli and Filippino Lippi, Adoration of the Kings

Images showing the Adoration of the Kings were particularly important in Florence, where the citizens celebrated Epiphany – the feast which commemorated the event – with costumed parades. The shape and scale of this picture suggest that it was made as part of a piece of furniture.

The vast entourage of the kings, including horses in decorated harnesses, is separated from the area occupied by the holy family (Christ, the Virgin Mary and Saint Joseph) by a wall with only a narrow opening. Two of the kings kneel in front of Christ; the one at the front is about to kiss his foot in homage.

Both Botticelli and Filippino worked on this picture. Botticelli was responsible for the large crowd to the left of the painting while Filippino’s starker, more elongated style of figure painting is seen in the group in the central foreground, which includes a kneeling man and the slightly bowing figure adjusting his right sleeve.

Images showing the Adoration of the Kings were particularly important in Florence. The event was marked on 6 January at the feast of the Epiphany, and every five years the citizens of Florence paraded through the streets dressed up as the kings and their entourage. This celebration was organised by a religious confraternity dedicated to the Epiphany, a group which was sponsored by the wealthy ruling Medici family. The Medici were particularly invested in the feast and the imagery of the Adoration because it showed princes recognising the divine kingship of the infant Christ and worshipping him in humility.

This painting, which may have been made as part of a piece of furniture, reflects the popularity of the subject in Florence as well as these festive processions. The vast entourage of the kings, including horses in decorated harnesses, is densely packed into the left part of the image. Parts of the crowd are unruly; near the back a white horse rears his head away from a fight involving his rider who wields an axe. The figures on the other side of the wall – in the vicinity of the infant Christ, seated on the lap of the Virgin Mary – talk amongst themselves, while others bow or kneel in reverence.

At the front of this group kneel two of the kings. One bows before Christ, bending to kiss his foot in homage, while the other makes to remove his crown in respect of the baby’s greater majesty. The third king approaches, dressed in white, carrying his gift for the infant in a gold vessel. A young man wearing blue and red hose, who has also removed his hat, cranes his neck to gaze into the sky. He might be looking towards the star which, according to the Gospel account, had led to kings to the site of Christ’s birth.

We know that Botticelli and Filippino sometimes worked together in the same workshop and they seem to have collaborated on this picture. The bustling, animated crowd on the left is most certainly by Botticelli: the foreground figures with their heart-shaped faces and fleshy chins are particularly characteristic of his work. Well known for the grace and elegance of his figures and draperies, Filippino was most likely responsible for the group of figures in the central foreground, which includes a kneeling man and a slightly bowing figure rolling up his billowing sleeve, as well as the man at the front who points towards the kings. Their largely plain draperies hang in long, heavy folds that appear natural rather than decorative, their simplicity in keeping with Filippino’s style.

The landscape, with wooded hills and a winding river with a single boat leading to the townscape of tall buildings, is derived from a Netherlandish painting by a follower of Jan van Eyck (The Stigmatisation of Saint Francis, Philadelphia Museum of Art). It may have been known to Florentine artists through drawings made after the painting, a common practice which here shows the popularity of northern European motifs in Florence.

Adoration of the Kings
Sandro Botticelli and Filippino Lippi 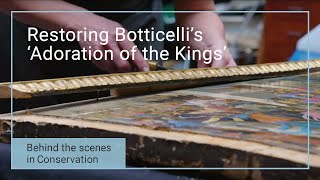 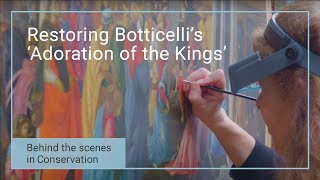 Behind the scenes in the Conservation department with restorer Jill Dunkerton as she restores Sandro Botticelli and Filippino Lippi's 'Adoration of the Kings'. 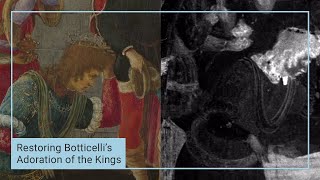 Jill Dunkerton, restorer, and Marta Melchiorre, scientist, investigate the collaboration of Botticelli and Filippino Lippi on the 'Adoration of the Kings'. This is the third video in a series on the restoration of this painting.