Rembrandt, A Woman bathing in a Stream (Hendrickje Stoffels?)

Rembrandt’s painting, unique for him in its tender intimacy, shows a young woman almost up to her knees in a stream. She lifts her shift and looks down with a little smile of pleasure at the cool water rippling against her sturdy legs.

Although it’s not certain, this woman may be Hendrickje Stoffels, who came into Rembrandt’s household to look after his infant son after his first wife, Saskia, died. Hendrickje and Rembrandt became lovers but were unable to marry. In the year this picture was painted, Hendrickje endured public humiliation because she was pregnant outside of marriage. Perhaps the painting was a homage to her strength and loyalty.

It has been suggested that the picture is a study for a biblical heroine in a much larger picture, but the plain shift the woman wears is enough to raise a doubt: such a heroine would have been richly dressed or nude. The most likely possibility is that Rembrandt knew and loved this quiet, gently absorbed woman and shared her delight in an unguarded moment of pleasure in some anonymous Dutch stream.

This painting is so immediate, so tenderly intimate, that we sense the young woman he depicted was precious to the ageing Rembrandt. But he doesn‘t make it easy for us to understand why. We don’t know who she is, where she is and whether the image is posed or something remembered.

Mellow light bathes her high forehead and her neck and breast, giving her flesh a soft bloom. Her face is plump and wholesome; her thick auburn hair is caught back but threatens to tumble about her shoulders – a stray ringlet and a tiny earring tickle her cheek. But her sturdy legs and slightly puffed knees, perfectly reflected in the stream, speak of demanding physical work and someone unused to leisure. She looks down with a little smile at the sensation of the water. Tiny ripples bubble against her skin as she wades forward, feeling her way carefully with a foot, lifting her shift in case it should get wet.

This shift is quickly painted in thick strokes in many different tones of white, suggesting a coarse fabric such as cambric. Baggy and shapeless, sleeves carelessly rolled back, the low neck slips off the woman’s shoulder, almost revealing her breasts. This isn‘t the garment of a wealthy client perhaps wanting an unconventional portrait, yet behind the woman is a heap of heavy red and gold brocade of some value. Does this belong to her? Is it simply a prop left behind after one of the dressing up sessions for a history painting that Rembrandt was making?

Some have suggested that this is a sketch or a study for a painting of a mythological or biblical heroine (Rembrandt painted several of these, but such characters are usually richly dressed or shown nude). The most likely is Bathsheba, the wife of Uriah, a general in the army of King David. David saw Bathsheba bathing and desired her. Wanting to marry her himself, David sent her husband into the thick of battle to ensure his death. Sometimes Bathsheba is shown in paintings as a temptress, in others as David’s victim, with no choice but to succumb to him because of his status. Rembrandt chose the second version for his great painting of Bathsheba that is now in the Louvre, Paris.

What has this to do with the young woman in this picture, seemingly so unaware of her own allure? It has been suggested that this is a preparatory study for Rembrandt’s painting of Bathsheba. Both were painted in the same year, 1654, and both portray a woman in or near water with rich, heavy fabric nearby – Bathsheba sits, the woman here stands. The settings are equally imprecise, dark shadowy places quickly painted and left simply as a background to the figure of the woman. But is it the same woman?

Like the image of the unknown woman, Rembrandt’s Bathsheba seems very real, not an imaginary ideal. Although entirely nude, she is physically similar: wide hipped with a rounded stomach and small breasts. The women share the same auburn hair, though Bathsheba’s is more artfully arranged and a ribbon brushes her bare shoulder. The faces bear similarities – the high, round foreheads and the noses are alike, although in both cases their lowered eyes can’t be seen.

But it appears that whoever she is, the woman in the stream isn't likely to be posing as a historic heroine. It does seem likely that she posed for Bathsheba but at some other time, and that this is not a study for the Louvre painting. The plain cambric shift is enough to raise a doubt. The most likely possibility is that Rembrandt knew and loved this quiet, gently absorbed woman and shared her delight in an unguarded moment of pleasure in some anonymous Dutch stream.

Hendrickje Stoffels came into Rembrandt’s household to look after his infant son after his first wife, Saskia, died. She is thought to have posed for several of his paintings including a portrait, but there is no evidence to confirm this. Although Hendrickje and Rembrandt became lovers, they were unable to marry because, by the terms of Saskia’s will, he would have lost a considerable amount of income if he did so. In the year that this picture was painted, Hendrickje was 28 years old. She had been subjected to public humiliation and was denied the Eucharist because she had become pregnant outside marriage with their first child, Cordelia. Perhaps the painting was a homage to her strength, endurance and loyalty.

Whoever this woman is, Rembrandt’s revolutionary technique – leaving the warm buff colour of the ground uncovered in places to create shadows, stroking wet paint into wet rough ridges to create texture – enabled him to do what he did best: portray a deep understanding of human emotions. In this picture, it’s not only the woman’s emotions that we sense, but also, it seems, Rembrandt’s own.

A Woman bathing in a Stream (Hendrickje Stoffels?)
Rembrandt 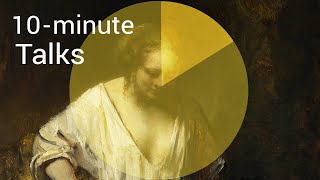 Bart Cornelis, Curator of Dutch and Flemish paintings, 1600-1800, discusses Rembrandt's 'A Woman Bathing in a Stream'.