This picture was made for King Charles I of England and given to him by Rubens, who was acting as an envoy of Philip IV of Spain, in 1630. The two countries had been at war for five years and both sides were keen for a peace deal. The painting is an allegory, the figures representing different virtues and other abstract concepts, and there is a clear moral narrative.

Among the key figures, the woman in the centre represents both Pax (Peace) and Ceres, goddess of the earth, and she is sharing her bounty with a group of children in the foreground. These represent future generations, but are also portraits of the children of Sir Balthasar Gerbier, Rubens’s host. Just behind Pax, Minerva, goddess of wisdom, is protecting the group from Mars, god of war. The overall message is clear: rejecting war and embracing peace will bring prosperity and plenty. Rubens’s mission bore fruit: a peace treaty between England and Spain was signed in November 1630.

This picture was made for King Charles I of England and given to him by Rubens in 1630. The most famous artist in the world at the time, Rubens was also a skilled negotiator and he had come to London as more than just a painter – he was an envoy of Philip IV of Spain. The two countries had been at war for five years and both sides were keen for a peace deal. Charles was an enthusiastic art collector, and with this painting Rubens was both appealing to his connoisseurship and delivering a diplomatic message.

The message is in allegorical form: the figures in the painting personify different emotions, virtues or other abstract concepts, and there is a clear moral narrative. To understand Rubens’s agenda we have to identify the figures – a combination of mythological beings, Roman gods and real people – and what they stand for.

The woman in the centre represents Pax (Peace), but Rubens seems to have also given her the qualities of Ceres, goddess of the earth. She feeds the child Plutus, god of wealth, with milk from her breast. With the help of a satyr and a putto, she shares her bounty, a cornucopia of the fruits of the earth, with the group of children in the foreground. They suggest both the innocence of youth and the hopes of future generations. The boy holding the torch is probably intended as the god of marriage, Hymen.

Just above the head of Pax, another putto carries a caduceus (a short staff with two entwined snakes), an attribute of the messenger god Mercury, whose associations included the ideals of fair exchange and reciprocation in negotiation. The putto holds an olive wreath, another reference to peace. The role of the two women on the left is less certain. They may be followers of Bacchus, the god of wine and festivity, which would explain the leopard in the foreground: Bacchus’ chariot was pulled by leopards. He was also the god of agriculture (an appropriate companion for Ceres) and was traditionally accompanied by satyrs and maenads (dancing nymphs). But while this would explain the woman with the tambourine, the other figure with her back to us, carrying a horde of gold and jewels, may simply represent prosperity.

The helmeted woman behind Pax is Minerva, goddess of wisdom. She is protecting the group by pushing away the god of war, Mars. The woman to his right, also being forced back, is probably a Fury, a goddess of vengeance, and to her right, in the top corner, is a harpy, another rapacious monster of classical mythology.

While there is some uncertainty about a few details, the overall message is clear and chimes with Rubens’s mission: rejecting war and embracing peace will bring prosperity and plenty. The mission ultimately bore fruit. Rubens returned to Antwerp in March 1630, having been knighted by Charles, and a peace treaty between England and Spain was signed in November.

There is another dimension to this picture. As well as being part of the allegory, the children have been identified as the eldest sons and daughters of Sir Balthasar Gerbier, an art dealer in the service of Charles I. Rubens stayed with him during this visit to London. George is the model for Hymen, the girl he is crowning with a floral wreath is his sister Elizabeth. The other girl staring directly at us with big, hopeful and slightly anxious eyes, is another sister, Susan. 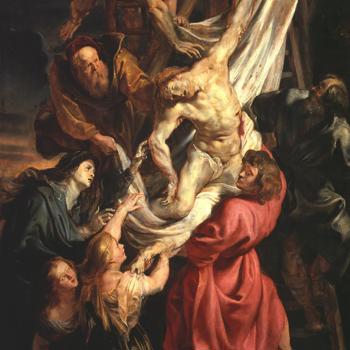 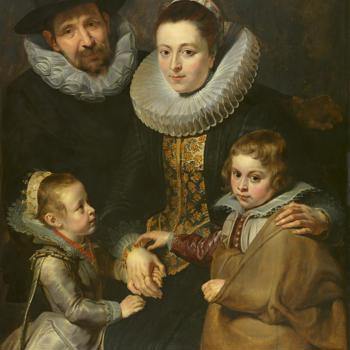 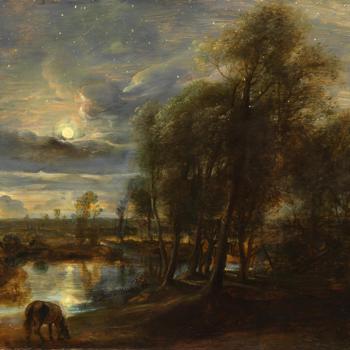