Image: Detail from Moretto da Brescia, Portrait of a Young Man, about 1540-5

The paintings displayed in this room are predominantly portraits by Northern Italian artists and as such reflect one of the most important pictorial genres of the period. Regardless of the identity of the sitter, the primary function of a portrait was to capture likeness and inner virtue, denoting that the sitter was worthy of the honour of being portrayed and in time, remembered.

Moretto and Moroni are among the finest representatives of the naturalistic approach that characterised 16th-century Lombard painting, and especially portraiture. Moretto worked primarily in Brescia, while his one-time student Moroni was the preeminent portraitist in Bergamo in the 1550s and 1560s, and after that in nearby Albino, his hometown. His portraits are characterised by acute psychological penetration, as well as great clarity of presentation.

Lotto was one of the leading Venetian painters of the earlier 16th century, although he worked mainly outside Venice, in part because the competition for commissions there was so intense. This exposed him to a broad range of influences, from Lombard naturalism to Raphael’s High Renaissance Classicism. This might help explain why he is one of the most individualistic of the great Italian painters. His works are characterised by the use of deeply saturated colours and bold shadow, and his portraits are among the most empathetic of their time.

Portrait of a Young Man
Bronzino
Room 12
Christina of Denmark, Duchess of Milan
Hans Holbein the Younger
This elegant young woman is Christina of Denmark, the youngest daughter of King Christian of Denmark. In 1538, King Henry VIII of England was looking for a fourth wife, after the death of Jane Seymour the previous year. As Henry’s official court artist, Holbein was sent to Brussels to capture the...
Room 12
Erasmus
Hans Holbein the Younger
Room 12
Henry VII and Henry VIII
Hans Holbein the Younger
Room 12
The Ambassadors
Hans Holbein the Younger
Jean de Dinteville, the man on the left, is shown on his second diplomatic mission to England on behalf of Francis I, King of France. To the right is his close friend, Georges de Selve, Bishop of Lavaur. This portrait was painted at a time of religious upheaval in Europe. Although the pope had re...
Room 12
Giovanni Agostino della Torre and his Son, Niccolò
Lorenzo Lotto
Giovanni Agostino della Torre was a distinguished doctor and citizen of Bergamo. He had taught at the University of Padua, and the costume he wears is official or academic dress. In 1510 he was elected prior of Bergamo’s College of Physicians, an office he held until his death.The texts on the tw...
Room 12 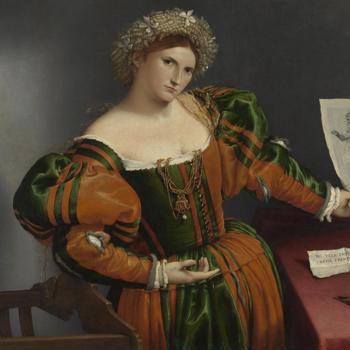 Portrait of a Woman inspired by Lucretia
Lorenzo Lotto
A sumptuously dressed young woman holds a drawing of the Roman heroine Lucretia. The story of Lucretia, who lived in the early sixth century BC, is told in Livy’s History of Rome. Prince Sextus Tarquinius crept to Lucretia’s room at night and raped her. She told her father and husband, who were u...
Room 12
Portrait of a Young Man
Moretto da Brescia
This lavishly dressed sitter, wearing a coat lined with lynx or snow leopard fur, is the Brescian nobleman and humanist Fortunato Martinengo (1512–1552). Ancient gold and silver coins and a bronze oil lamp in the shape of a foot on the table allude to his scholarly interests, and perhaps also to...
Room 12
Portrait of a Lady ('La Dama in Rosso')
Giovanni Battista Moroni
The portrait has long been known as ‘La Dama in Rosso’ – the lady in red. Moroni especially favoured pink or orange-reds. Here he has complemented the colour of the dress in the pinky-orange circles of Verona marble set in the floor. The sitter’s clothes are made of the most luxurious materials a...
Room 12
Portrait of a Collector
Parmigianino
An unknown man sits at an inlaid table wearing a large black fur-lined coat and black hat. His eyes do not fix on us but appear to be watching something slightly to our left. He holds the so-called Durazzo Book of Hours by Francesco Marmitta, created about 20 years earlier (now in the Biblioteca...
Room 12
Portrait of a Young Man holding a Letter
Rosso Fiorentino
This is the earliest of very few known portraits by Rosso. It was painted in Florence, while he was in the workshop of Andrea del Sarto. It reveals something of Rosso’s eccentricity, particularly in the strange spiky fingers, the curiously abstract style and the characteristically swift way of wo...
Room 12
Portrait of a Young Man
Andrea del Sarto
We have interrupted a young man reading; he turns to look over his shoulder at us. The unguarded look creates the impression that we are seeing him as he really is. His identity is uncertain, although he may be the stationer Lorenzo di Matteo Peri, whose family commissioned Andrea del Sarto’s Dis...
Room 12
Judith (or Salome?)
Sebastiano del Piombo
A young woman is moving towards an open window or door through which a hilly landscape can be seen. She turns to look back at us over her shoulder, her arm parallel with a stone parapet on which the date 1510 is written. On a metal salver she carries the greyish-green severed head of a man. The w...
Room 12
Portrait of a Lady
Sebastiano del Piombo
Room 12
Portrait of a Lady ('La Schiavona')
Titian
Titian painted this picture when he was in his early twenties, at a time when private portraits of individual women were still rare. We don‘t know the identity of the sitter, if indeed this is a portrait in the traditional sense, rather than a general picture of a woman designed to encourage such...
Room 12
Portrait of Gerolamo (?) Barbarigo
Titian
In this, one of Titian’s earliest portraits, the sitter turns to look at us over his shoulder and momentarily meets our gaze. Our attention is focused on the raised brow above his right eye, which is positioned midway across the picture. The man’s elbow rests on a parapet and his voluminous quilt...
Room 12