X-ray images (radiographs) provide a clear means of understanding the way in which an artist worked. The internal structure of the picture is revealed, rather like the human skeleton in a medical X-ray. Materials that are dense to X-rays, such as the abundantly employed chrome yellow pigment used in both Sunflowers, appear light or white in the radiograph. Less X-ray dense materials register as grey or black.

1. Comparative details from the London and Amsterdam Sunflowers to show brushwork and the thickness of the paint - image on the right © Van Gogh Museum, Amsterdam (Vincent van Gogh Foundation)
Enlarge and explore 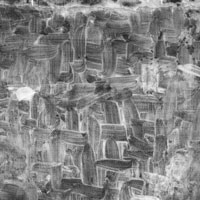 2. X-ray detail of the upper right of the London Sunflowers showing the 'basketwork' brushstrokes
© The National Gallery, London
Enlarge and explore

The radiographs show Van Gogh's vigorously and rapidly applied brushwork in both pictures and provide clues to his order of working. The thickest paint, applied wet-on-wet and manipulated with the brush on the canvas surfaces, is seen in the sunflower heads themselves [1]. The directional character of the 'basketwork' paint structure of the backgrounds is clearly evident [2].

The X-ray image also reveals that Vincent added an extra strip of wood, about 3cm wide, to extend the canvas of the Amsterdam version, perhaps due to intended frame dimensions. Without this strip, the two canvases are virtually identical (a standard French size of the period known as a 'portrait no 30'). In the London painting, the internal structure shows that Vincent worked with an initial unpainted space left in ‘reserve’ for much of the bunch of sunflowers, defined first as a sketchy line drawing. He then laid in the solid painted background, finishing it with further contours of paint after the majority of flowers had been thickly applied. Van Gogh followed the same general pattern in making the Amsterdam version [3]. 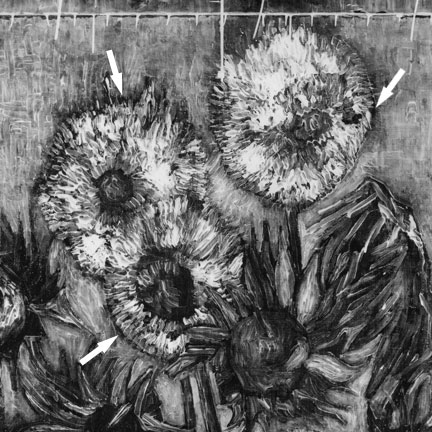 3. X-ray detail of the Amsterdam Sunflowers showing dark penumbra, where the paint is thin or lacking, around sunflowers kept in 'reserve' in the initial painting process
© Van Gogh Museum, Amsterdam (Vincent van Gogh Foundation)
Enlarge and zoom in

Christopher Riopelle is Curator of Post 1800 Paintings and Ashok Roy is Director of Collections. This material was published on 23 January 2014 to coincide with the display The Sunflowers.

With thanks to Dr Ella Hendriks, Senior Paintings Conservator at the Van Gogh Museum, Amsterdam.