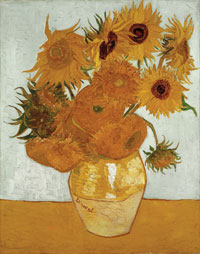 Van Gogh painted seven still lifes of sunflowers during his time in Provence in 1888–9. Two of them, the National Gallery painting and another now in Munich [1], were made to hang in Paul Gauguin's bedroom, by way of welcome to the house the two artists shared in Arles [2]. Their brilliant yellow hue is a symbol both of happiness and of sun-drenched Provence itself. Painting them, Vincent wrote to his brother Theo, ’takes the energy and concentration of a person’s whole being’.

The experiment in communal living soon failed. The two men quarrelled, Gauguin departed in anger at Christmas 1888, and Van Gogh suffered a breakdown. In January 1889, however, Vincent returned to the sunflowers motif. Two of the three versions he then painted, the Amsterdam canvas and another now in Philadelphia [3], were to hang either side of a portrait of his friend Augustine Roulin [4], shown holding a rope used to rock a cradle, 'almost,' a recent scholar has written, 'like a secular Madonna.' The resulting triptych would be an image of consolation [5]. 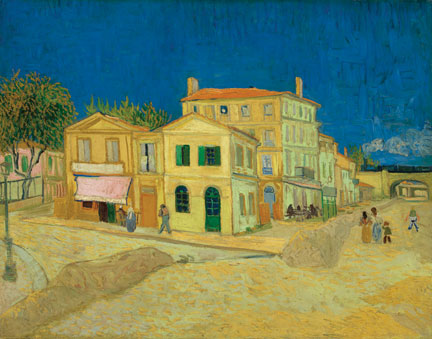 Gauguin was among the first to understand that Vincent’s Sunflowers constituted the summit of his art. Even though the two had fundamentally disagreed on the direction their work should take, he wrote to Vincent asking him to send a version as a gift. 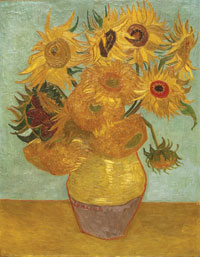 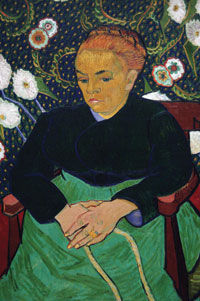 5. Van Gogh imagined hanging two of his Sunflower paintings either side of the portrait of his friend Madame Roulin