On the surface, the portrait of Pompadour at her embroidery frame shows her virtuously engaged in work appropriate for an 18th-century woman. With Pompadour it was not so straightforward - her embroidery sessions often doubled as power-broking meetings.

There was nothing unusual about acknowledged royal mistresses playing a role in state business, but most contemporaries regarded Madame de Pompadour as enjoying far more power than was desirable. 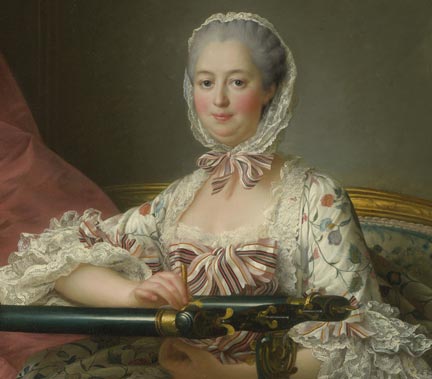 Her influence extended to all aspects of royal policy - court patronage, domestic and international affairs, as well as being the unofficial minister of culture. Any enemies at court were replaced, her supporters making sure that policy decisions went her way.

From the mid–1750s onwards, Pompadour became involved in foreign policy. Events took a disastrous turn for France. Pompadour's influence was indirectly responsible for starting the Seven Years' War in which France suffered a humiliating defeat.

Louis's popularity slumped, and Pompadour was blamed both inside and outside the court as a bad influence. She managed to survive the storm, but she subsequently took a less active role in foreign affairs. She died in 1764 aged just 43, shortly before the completion of this, her last portrait.