When Raphael first visited Florence in 1505 Michelangelo's 'David' had just been unveiled, and he was working on the cartoon for the 'Battle of Cascina' fresco which Vasari described as 'a school for artists'. 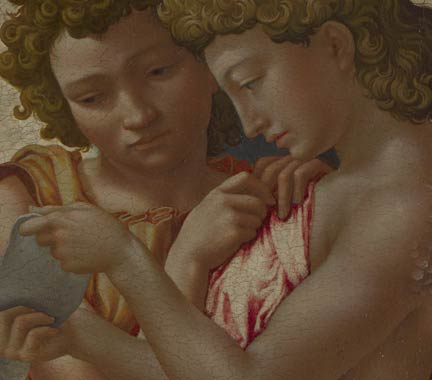 Detail from Michelangelo, The Manchester Madonna, about 1497

Eager to move on from Perugino's influence, Raphael studied Michelangelo's drawing as well as his sculptures. He taught himself how to make the figures interact dynamically together and how to use the effects of light to give his forms three dimensions.Within months Raphael's style was transformed, and he used Michelangelo's ideas to animate his own paintings.

Michelangelo boasted that 'Everything he had of art, he had from me'. But this does not do justice to Raphael's creativity in learning from so many different sources.

Next: Finding the middle way