This is one of the best seventeenth-century examples of what today we might think of as a high-resolution image. The detail and brushwork are so fine that no matter how closely you look at, or zoom in on, the picture, it never quite seems to pixelate. Yet the painter has made a very strange mistake.

Look carefully at the figures and you will see that they do not have reflections. Take the two little girls, and the dog peeing against the post. We can see the image of the post reflecting back from the surface of the canal, but not the dog or the girls. Figures such as these were normally added after the rest of the painting was complete, so it seems that van der Heyden simply forgot to make the adjustment. He certainly considered the painting finished because it was delivered to his clients, the governors of the Westerkerk in Amsterdam – the church in the middle of the painting.

This is one of the ultimate seventeenth-century examples of what today we might think of as a high-resolution image. No matter how closely you look at, or zoom in on, the details, they never quite pixelate.

It’s a painting which has clearly been designed to look as realistic as possible. The surface is so finely worked that there is no trace of the painter’s brushstrokes. The shape of individual cobblestones has been carefully articulated; some of the lettering on the advertising bills pasted on the wooden bollards is legible; and the subtle distortions of the light shimmering on the surface of the canal are depicted with extraordinary care. Yet the artist has made a very strange mistake.

If you look carefully at the figures you will see that though most apparently have shadows, they do not have reflections. Take the two little girls, and the dog peeing against the post, for example. We can clearly see the image of the post reflecting back from the surface of the canal, but not the dog or the girls. The same is true of the woman in the doorway on the right: the reflection of the doorway is clear, but the woman is not there.

How can we resolve this conundrum? We know that normally in scenes of this kind, the figures were added after the rest of the composition was complete. So it looks as though whoever was responsible for painting in the figures – it may have been a fellow artist or studio assistant, but most likely it was van der Heyden himself – simply forgot to make the adjustment. It is a surprising omission for a painter who was so obsessed with detail, in what was a major commission: this is one of his largest surviving paintings. It seems very unlikely that it was left unfinished because it was delivered to his clients, the governors of the Westerkerk in Amsterdam – the church in the middle of the painting. It hung in their meeting room for more than 200 years.

So the missing reflections are an inexplicable mistake, but they do raise the question of how realistic these paintings were meant to be. The scene must certainly have looked approximately like the real one. Indeed, though the buildings around it have changed, the view of the church and the lines of the canal are very similar even today. Yet we can be sure that van der Heyden, who was a specialist in painting views of Dutch towns and cities such as this, would have manipulated some of the details to provide the most appealing view of the church for his clients. It is almost certainly no accident, for example, that there is a convenient gap in the tree line which allows us to see the eastern facade of the church more clearly, and that the tree which does stand in our way is a particularly skimpy one. By then screening most of the neighbouring buildings with foliage, van der Heyden has increased the visual emphasis on the church.

And looking very carefully through those leaves, we get another indication of his obsession with detail. It is clear that he painted every brick and window pane before he then painstakingly hid them again with thousands of tiny dabs of green paint.

A Farm among Trees
Jan van der Heyden
There is something rather mysterious about this rare – and tiny – landscape by Jan van der Heyden, who specialised in painting urban scenes in a highly precise and realistic way. In this picture he has, instead, thrown a sort of veil over the buildings, a screen of trees which obscures our view.T...
Not on display
A Square before a Church
Jan van der Heyden
Jan van der Heyden clearly enjoyed the discipline of painting very fine details. Although this is a very small picture, he has delineated many of the leaves of the trees individually. If you look closely at the grey roof of the church, you can see that he has used incredibly fine lines of black p...
Not on display 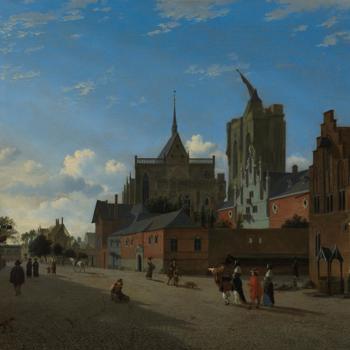 A View in Cologne
Jan van der Heyden
This is one of at least four versions that Jan van der Heyden made of this scene of Cologne and its half-built medieval cathedral. It is an alluring view. He has captured the lengthy shadows and raking light of a bright morning in a city street populated with people from all walks of life.Most of...
Not on display
An Architectural Fantasy
Jan van der Heyden
Jan van der Heyden had an outstanding ability to make buildings seem almost photographically real (at least, that’s how we might describe it today). He worked with extraordinary delicacy and precision, taking the trouble to delineate and shade the finest details of stone and brickwork and the pla...
Not on display
An Imaginary View of Nijenrode Castle
Jan van der Heyden
Although he liked to paint scenes that looked highly realistic, Jan van der Heyden made adjustments to what he saw, and often created entirely imaginary scenes. Sometimes he would compose fantasy buildings, combining elements from more than one structure. Here his approach is slightly different....
Not on display
The Huis ten Bosch at The Hague
Jan van der Heyden
This is a view of the south-east front of the Huis ten Bosch (‘House in the Wood’), which was built just outside The Hague as a summer palace for the wife of the head of state of the Netherlands. The building is shown in its original state, a decade or so after it was finished. Today it is used b...
Room 26