Wilson was a pioneer of landscape painting in Britain. He visited Italy and, in Rome, met the French painter Joseph Vernet, who encouraged his interest in landscape. Like Vernet, Wilson was deeply influenced by the work of Claude and Gaspard Dughet, and he interpreted the English and Welsh landscapes in their manner after his return to England. Wilson is sometimes called 'The English Claude'.

Wilson was born in Wales, moving in about 1729 to London, where he trained with Thomas Wright as a portrait painter. A number of topographical views by Wilson of the 1740s are known, but it was not until working in Italy that Wilson turned seriously to landscape. He visited Venice in 1750/1 and then moved to Rome. After his return to England in 1756/7 he continued to paint views of Italy as well as views of England. He exhibited at the Society of Artists from 1760 and was a founder member of the Royal Academy in 1768, though he died in poverty and relative obscurity. 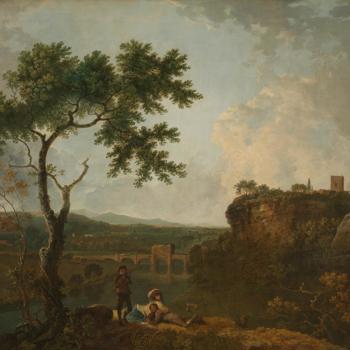