In contrast to many of Turner’s paintings – often full of activity, grand architectural settings, dramatic weather and dazzling effects of colour and light – this painting looks almost empty. The only figure is a barely visible young boy with a shrimping net over his shoulder, who wades in from the shoreline to be greeted by a small leaping dog. The ghostly trace of a boat to the right of centre, which has been painted over, suggests that Turner decided to emphasise the vastness of the sky and sea rather than human industry.

The title, The Evening Star, was not Turner’s, but was given to the painting decades later because of the presence of a star – a tiny dab of thick white paint. Although originally thought to be unfinished, Turner may actually have been satisfied with the painting’s evocation of a particular moment and not seen the need for additional work on it.

In contrast to many of Turner’s paintings – often full of activity, grand architectural settings, dramatic weather and dazzling displays of colour and light – this is reduced to its most fundamental elements: day and night, land and sea, earth and sky.

Yet the picture has a subtle construction. Three near-symmetrical vertical markers – the posts in the sea, the bright reflection of the star on the water and the young boy who wades in from the shoreline to be greeted by a small leaping dog – give structure to the space around them. They also create a diagonal rising from right to left that leads our eye to the distant horizon, where an inky black sea meets white clouds.

The title of this painting was not chosen by Turner, but appears to have been given to it around 1906 while an inventory of the Turner Bequest (the gift of his paintings he left to the nation in his will) was being compiled. Some 11 lines of verse scribbled by Turner in a sketchbook he was using around 1829–30 (probably when this painting was made), include the phrases: ‘Where is the star which shone at … Eve / The gleaming star of Ever … [or Eve] / The first pale Star of Eve ere Twylight comes …’. The words reveal Turner’s attempt to find a poetic language to describe the sequence of the ‘pale’ evening star being overpowered by the more ‘powerful ray’ of the moon.

Even if these lines do not relate directly to this painting, they show that he was keenly interested in transitional moments, such as twilight or dawn, when one period of the day or night is superseded by the next. The star itself is a tiny dab of thick white paint. The ghostly trace of a boat to the right of centre, which has been painted over, suggests that Turner decided to emphasise the vastness of the sky and sea rather than human industry.

Although the painting was originally thought by critics to be unfinished, it is possible that Turner was in fact satisfied with its evocation of a particular moment and did not see any need for additional work on it. 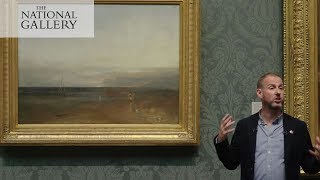 'The Evening Star' by J.M.W Turner is one of the Gallery's most popular paintings, but this hasn't always been the case. Learn more about why this painting was once considered 'unexhibitable' and Turner's Bequest – the largest ever donation of works ...

(Showing 6 of 9 works)
Calais Pier
Joseph Mallord William Turner
A cross-channel ferry (a packet), fully laden with passengers and flying a British flag, is approaching the port of Calais. Around it, small French fishing boats (‘poissards’) head out to sea. The water is rough and dark storm clouds gather, although a shaft of sunlight breaks through to illumina...
On display elsewhere
Dido building Carthage
Joseph Mallord William Turner
Turner’s painting of the North African city of Carthage, founded by Dido, its first queen, was inspired by Virgil’s epic poem, the Aeneid. The figure on the left dressed in blue and wearing a diadem is Dido herself, visiting the tomb that is being built for her dead husband, Sychaeus. The man in...
Room 36
Dutch Boats in a Gale ('The Bridgewater Sea Piece')
Joseph Mallord William Turner
Room 34
Margate (?), from the Sea
Joseph Mallord William Turner
As with many of Turner’s paintings that were never exhibited in his lifetime the title of this picture was not his choice, but was decided on some 50 years later. We can’t be sure that it shows the north Kent seaside town of Margate, but the white cliffs just visible on the horizon recall other v...
Not on display
Rain, Steam, and Speed - The Great Western Railway
Joseph Mallord William Turner
A steam engine comes towards us as it crosses the Maidenhead Railway Bridge in the rain. Designed by Isambard Kingdom Brunel, the bridge was completed in 1838. We are looking east towards London as the train heads to the west. The exaggeratedly abrupt foreshortening of the viaduct, which our eye...
Room 34
Sun Rising through Vapour
Joseph Mallord William Turner
It is low tide in the early morning and fishermen unload their catch from a boat beached high and dry on the shore. Some people enjoy a meal. Others prepare the catch for sale. This human activity contrasts with the stillness of the glassy sea which, like a mirror, reflects the hazy sunlight. The...
Room 36
The Fighting Temeraire
Joseph Mallord William Turner
Turner’s painting shows the final journey of the Temeraire, as the ship is towed from Sheerness in Kent along the river Thames to Rotherhithe in south-east London, where it was to be scrapped. The veteran warship had played a distinguished role in the Battle of Trafalgar in 1805, but by 1838 was...
Room 34
The Parting of Hero and Leander
Joseph Mallord William Turner
This picture illustrates an ancient Greek myth that was retold by later writers, including the English romantic poet, Lord Byron. Hero, a priestess of Aphrodite, lived in a tower on the Hellespont strait, which separates Europe from Asia. She was in love with Leander, a young man from the Asian s...
Not on display 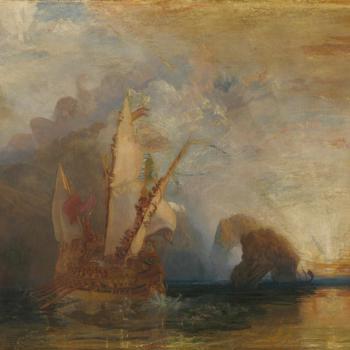