He was born in Midden-Beemster, was a younger brother of Carel Fabritius, and described as a carpenter in 1641. He lived in Amsterdam for some years in the late 1640s; then he was in Delft and Leiden. He later returned to Amsterdam, where he died. His early style shows the influence of Rembrandt.

The Adoration of the Shepherds
Barent Fabritius
Barent Fabritius’s bleak, shadowy stable is coldly lit. The rays radiating from the Christ Child in the manger light up the people close to him, but even they bring little comfort. Only the deep, dusty pink of Mary’s gown and the shepherd’s extraordinary red hat bring a touch of warmth to the sce...
Not on display 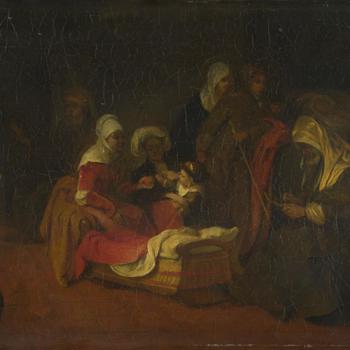 The Naming of Saint John the Baptist
Barent Fabritius
Two women sit on a bed playing with a baby – one of them holds out an apple for the little boy to grasp in his chubby fingers. With an encouraging smile, the other points it out to him. The baby is Christ’s cousin, John. This is his naming day and he will grow up to be known as John the Baptist.Z...
Not on display