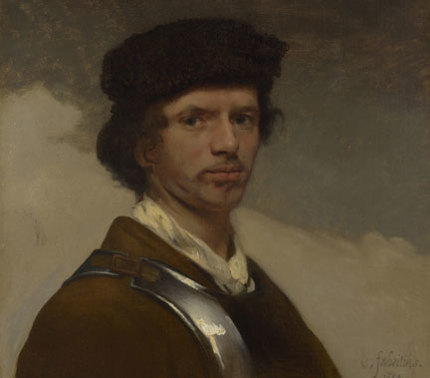 Fabritius was the most innovative of Rembrandt's pupils. He worked under him in Amsterdam during the period 1641-3. Very few of his works survive.

Fabritius painted in Delft and his work with its cool lighting, dark figures against a light background, and his interest in the nature of optics has an affinity with the most famous Delft artist, Vermeer.

Fabritius was tragically killed at the age of 32 when the Delft municipal gunpowder magazine exploded in 1654. The aftermath of this event was recorded in a painting by Egbert van der Poel. The New Church at the left of his picture can also be seen in Fabritius's 'View of Delft' in the Collection.

Fabritius's few paintings show a very accomplished technique. He combined thin glazes with selected areas of impasto to create varying impressions of depth and texture. The extent to which he may have been interested in perspectival effects is considered in the entry on the 'View of Delft', a painting which may have formed part of a perspective box.

A View of Delft
Carel Fabritius
This very small and very unusual painting shows the view of the Nieuwe Kerk in Delft as though through a wide-angle lens. The effect is emphasised by two musical instruments, set out on a table by the man – probably a maker of, or dealer in, such instruments.The violin (or possibly a viola da gam...
Room 19
Young Man in a Fur Cap
Carel Fabritius
This portrait is one of Carel Fabritius’s final works, made in the last year of his short life. He was apprenticed to Rembrandt between 1641 and 1643 and is generally considered one of his most talented pupils.Although it is impossible to be sure – no documented likeness of Fabritius exists – thi...
Room 22